Harry Agombar: making up the numbers

Proper footballers generate statistics almost as quickly as they generate pound coins. But not poor old Harry Agombar, for Swindon he’s got zero: zero appearances, zero goals, zero assists (although he has taken home quite a few pound coins). The club couldn’t even be bothered to report on his injuries. But if Agombar is ever going to leave (even on loan to Hereford) he’s going to need some more impressive stats, which is why I’ve made some up.

0/101. Harry’s pass completion – on Instagram where he made 101 passes at Doctor Who sex-midget Jenna Coleman. She has since blocked him. And informed the police.

719. Harry has collected all 719 Pokemon. He has also completed Angry Birds, Flappy Bird, Angry Flappy Birds, Angry Social Isolation And The Retreat Into Self 2.

23. The number of times Harry has read the last article on TheWashbag.com about Harry Agombar. He still hasn’t got all the answers right.

36. The total number of players who have been selected above Harry Agombar over the past-season-and- a-half. That includes Matt Jones, Connor Waldon, Will Randall and Tijane Reis.

66. The number of episodes of Breaking Bad Harry has watched. He has also seen 60 episodes of The Wire, 204 episodes of 24 and all 209 Peppa Pigs. Harry Agombar certainly gets value out of his NetFlix subscription. In fact, his ‘Recently Watched’ category just says ‘Everything’.

100. Harry’s wizard, named Berwhale the Avenger, has reached level 100 in World Of Warcraft.

0. The number of hours Harry takes getting dressed to go out. On the days when he does go out. Usually he eats cereral in his dressing gown and watches Loose Women with the curtains closed. 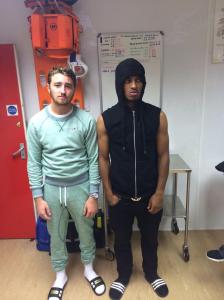 111,0054. The number of matchsticks Harry used to create the life-sized model of Roman pro-dangle-jiggler Silvio Berlusconi to assault with his scale model of the scale model of Milan Cathedral.

43. The amount of times Harry has checked in on 4Square at Swindon’s library. He doesn’t have a library card and is yet to take a book off the shelf, but he can often be found non-fiction section, just next to the radiator.

Feel free to add your own Harry stats below and watch the 188 times that Harry will click the ‘1 star’ rating.