Buying a football club is unlikely to be a sound financial investment as members of Andrew Fitton’s original consortium have found out. Five years after their takeover Swindon Town have new owners and an empty manager’s office. Can Fitton & Co. say they’ve left the club in a better state than they inherited and what lessons can McCrory & Co. learn from the past? Asks Ron Smith.

Following years of uncertainty, poor communication between the board and fans, and lurching from financial disaster to disaster, Andrew Fitton, Jeremy Wray, Russell Backhouse and Nick Watkins finally secured their takeover and seats on the board with the essential financial backing of wannabee silent partners Sir Martyn Arbib and Andrew Black. A moment of unbridled sense of optimism swept over the County Ground, albeit until the unveiling of Maurice Malpas.

While the appointment of the dour Scot underlined the lack of on-the-pitch knowledge and faith in manager who interviews well; it was Fitton’s objective to “make this into one of the best run and managed clubs in the country” that gives us now some real sense of progress five years on.

On their takeover in January 2008 as Swindon Town Holdings Limited acquired 75% of the Club, Swindon Town were saddled with significant debts and the ramifications of two stints in administration. The balance stood at a deficit of £18.5m owed to shareholders and creditors, including the Company Voluntary Agreement (CVA) and liabilities to Bill Power and the failed Shaw Park Developments Limited.

Within a space of twelve months £8.6m was written off against the Company’s reserves following a reduction in the Authorised Share Capital of the Company. The CVA was finally signed off and ended several years of embargoes and hindrance to investment. The Bill Power dispute was won after the Club secure a High Court judgement in their favour of Power’s £1m constituting an investment, not a loan. Add to them, season ticket prices were slashed to bring back lost supporters and Andrew Fitton fought off a widing up petition issued by St Modwen; which for a while led some to believe that a third drop into administration would be enough to secure points deductions and being thrown out of the Football League.

Despite Andrew Fitton’s vision for sustainability in the way football clubs were operated and regulated, the consortium ultimately continued the club’s overwhelming reliance on the benefactor model for funding to ensure the team remains competitive on the pitch. The Club was bolstered by the support provided by it’s holding company and the funding to sustain the club through successive years of red balance sheets; in the form of soft unsecured and interest free loans, which were due for repayment in 2015. Fitton’s solution to address the deficit through substantial player sales – around £4.5m – must also be remembered as crucial to secure our short term future at the time.

The consortium would always be limited by what turnover the Club could generate, with the eye always on the County Ground redevelopment to provide a real opportunity to solve these woes. Nonetheless they made significant progress in tough economic times to increase turnover above by approximately 20% and revenue from commercial activities by 30% above 2008 levels – assessed under the latest 2011 accounts.

Over the years the consortium’s success hasn’t purely been in a financial sense as mending the ties with supporters also took centre-stage. Looking back at their initial ten point plan from January 2008, amongst lifting the CVA, refitting the Club Shop, improving the hospitality facilities and unifying all red seating in the Arkells Stand was perhaps the most important: Point 5 – Communication.

John Ward – Chairman of TrustSTFC – knows better than anyone the mistrust that can build up between supporters and previous Boards. Discussing the positive impact of Fitton & Co’s approach to open dialog has revealed these ties have not purely been a clever PR exercise by the Club, fronted by two likable and hugely popular chairman in Fitton and Jeremy Wray.

He advises initiatives, such as “Andrew Fitton’s power point presentations at AGMs on the finances of clubs in general and Swindon in particular were frank and illuminating, and the ‘from the Boardroom’ programme notes were mostly informative”. However there clearly remains work to increase already strong levels of supporter involvement with the decision-takers; “Nick Watkins was always willing to meet the Trust and listen to our point of view but did not always consult before taking important decisions, e.g. on ticket price increases. What was missing was a formal relationship between supporters and the club, but maybe this was our fault for not seeking it because all seemed to be running smoothly.  Establishing this will be the first aim of the Supporters Trust with the new owners.”

Three years after leading the takeover Swindon were relegated to League Two and Andrew Fitton was gone. In doing so he kept to his promise that “If in three years time we are in the Championship I will have succeeded, if not I will have failed”. In a moment a dream for balancing the need to remain competitive on the pitch and sustainable on the balance sheet was gone. What happened next was a dramatic change of strategy.

The marriage of Jeremy Wray, Paolo Di Canio and STFC was a perfect match. Offering financial support through the backing of Andrew Black and the overwhelming support of his manager, they sough to secure a three-year plan to deliver Championship football. Although it now transpires that Black never signed up to this. Throughout Di Canio’s tenure an equity investment of around £3m from benefactor Andrew Black has kept the club very competitive; resulting in a League Two title and flirting with a back-to-back promotion a year on.

However, the consortium was always as strong as the sum of it’s parts. After Fitton departed and Sir Martyn Arbib not committing further funding, Andrew Black was left holding the baby and being thrust into the public eye. It became a role which the self confessed non-football fan and Betfair co-founder never wanted. This soon tested his commitment and kicked-off a search for a fresh investor to share the pain of funding Paolo Di Canio’s broad transfer strategy and underwrite the Club.

Privately moves were afoot to sell the club back in 2011. Black now admits the deal “fell through because the Football League concluded that they couldn’t afford to run the club. One of their main backers died suddenly in the final weeks.” It wasn’t until after Wray was replaced with Sir William Patey in October 2012 that there was the first public sign a fundamental shift. Patey’s brief “to secure investment” was clear and ultimately admitted publicly that the ownership had come to a natural end.

In that eventual exit has come one of the consortium’s greatest legacies. The decision by Andrew Black with Andrew Fitton and Sir Martyn Arbib to write off between £9.5m to £10m of unsecured debt to facilitate McCrory’s consortium purchase has indeed “accomplished Andrew’s key objective of passing the Club onto the new owners in a good state of health” which were the words of Sir William Patey.

It then comes as a complete surprise to read some of the vitriol leveled at Andrew Black over the past weeks with accusations of ‘running the club into the ground’, ‘financial mismanagement’ and ‘jumping the ship’, which are clearly wide of the mark. Without a generous benefactor like Black, Swindon Town couldn’t have employed Di Canio, wouldn’t have gone nearly two years since selling a ‘star player’, while spending significant sums, paying off failures and continually reinvigorating Di Canio’s squad; not to mention challenging for the League One title.

While Paolo has kept to his word and resigned, new owners provides new opportunities, but building on the foundations laid by Fitton & Co should form the basis on which Jed McCrory’s consortium should look ahead. McCrory, Gary Hooper, Steve Murrall and Callum Rice – as Seebeck 87 – start on relatively good terms after acquiring the Club for next to nothing, with the debt burden significantly reduced, albeit managerless – the later being in much the same as Fitton’s takeover position. Those new owners will need to meet the day-to-day running costs of the business. It still remains to be seen whether they can provide assurances they’ve the funding to ensure  Town will fulfill fixtures beyond this season. 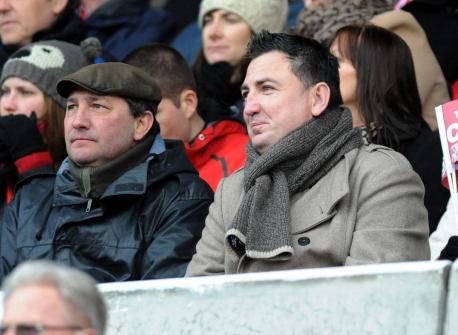 The real impact of their arrival will be felt by the business model which they are turning to and the type of manager that it can support. McCrory has already wasted no time to state his desire to “get the Club secure and self sustainable first then review the future”. The word ‘sustainable’ conjures the Andrew Fitton years, however even during those times the Club benefited from cash injections through loans and the holding company, which may not be available under Seebeck 87.

With little information available on the funding underwriting power of Jed McCrory’s consortium, we could be coming to terms with an increased likelihood for players sales, season ticket price increases and reduced budgets in the interim period to meet the already high and under-funded – by normal revenue – running costs. As McCrory will soon realise that without the County Ground redevelopment the Club will always remain be limited in balancing the need to compete at the highest level with sustainability.

The concerns remain amongst supporters that our Club could have been taken over by ‘undesirable types’ whose intentions and ability to deliver may not match their or our ambitions. All this uncertainty provides a real case for McCrory & Co. going further than their predecessors and increasing supporters’ involvement and dialog with the Club. In which case the Supporters Trust are best placed to deliver that role.

First and foremost, in the days following the takeover we must give McCrory & Co. the benefit of the doubt and welcome their acquisition of the Club, which has staved off administration and the eventual ten points deduction  We’ll just have to see what transpires in terms of funding, however one thing has been obvious for some time, the Club will not have the benefit of a generous benefactor anymore so we’ll have to adjust quickly to the new ambitions and new manager – which makes it even more important to seize the advantage and secure promotion this season.