Phew…this season has finally finished and on a high note with the 2-0 victory at Tranmere Rovers.

Before we start to look forward to hopefully a single season in League Two (before a promotion, not in the other direction…) I just want to run the final rule over 2010/2011, with the 10 reasons why I believe we failed, been relegated and finished bottom of the league.

1. Sold best players and not replaced them – Is probably the most frequently heard and ultimately the real reason why we failed. You just can’t disagree with the ramifications of failing to replace Greer, Paynter, Ward, Austin and Morrison.

That’s not to say these could be replaced, as of course quality footballers don’t come cheap and everyone is after them. Having said that, I don’t believe the effort was really made to replace them.

2. Believing our own hype – The monkey on the back that was the Play-offs couldn’t be forgotten. Avenging the defeat last May was paramount and blinded everyone throughout the season. Even in the new year with the dismal run in full swing, Wilson continued to believe a play-off finish was still possible.

His deluded view persisted until the 3-0 defeat at Leyton Orient in early February, by which time we’d slumped to 21st and 13 points off 6th place. This mindset obviously rubbed off on the players, still believing their own hype and failing to realise the  situation were were falling into.

3. Goals, or lack of them… – We got less points than anyone else because we couldn’t score goals. 50 goals all season masks the fact that since 12 (league) goal Charlie Austin walked out in January we only scored a further 4 goals at home and 9 away. So that’s 20 games in which the whole team scored only 1 more than Austin managed in his 21 appearance in the first half of the season… now that’s relegation form. 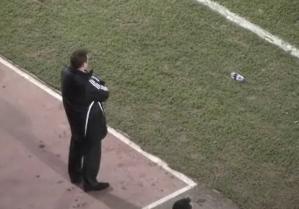 4. Fitton didn’t sack Danny Wilson in November – Back in November 2008 Andrew Fitton did the right thing and sacked Maurice Malpas, yet two years later Fitton went against his earlier instincts and stuck with Danny Wilson. This was despite Wilson having an almost identical record to Malpas’ in both league and cups (17 points from 14 games and early cup exits). Fitton later admitted giving Wilson the benefit of the doubt and time because of his play-off achievements was a massive mistake.

5. Relegation fighters? – Wilson assembled the squad with only promotion in-mind. So does it come as a surprise that a bunch of players motivating themselves for promotion fails when faced with the opposite? The problem was that this ‘promotion squad’ couldn’t even get that task right, as they failed to make any impact on the top half of the table.

Many of the new signings had turned down moves to Championship or ambitious clubs to be part of a great new challenge. Prutton turned down Brighton, Dossevi and Rose a few Championship clubs and they ultimately couldn’t give a toss when the club form dipped.

Having gone through the squad only two had previous relegation experience in their careers. Those being Rose with Stockport (although he was on-loan at Norwich) and Prutton in his days at Southampton. The lack of vital experience meant that we were only going to come out on the losing side in the relegation dog fight.

6. January transfer window – With Wilson given a final chance to put it right and make purchases in January where were the replacements and experienced fighters? Instead we were treated to signing players we already had (Ritchie), signing a non-league defender with promise but no League experience, an injury prone young defender from Celtic who probably is never going to play for Town and a League Two striker who is again one for the future…

7. Loan failures – After the failure of the January transfer window weren’t we told experienced loan players would arrive and make the difference… Frampton isn’t anywhere near as good as Greer or Morrison, Obika couldn’t give a shit, Grella lost interest, Andrew had spent too much time with Pericard learning how not to make any effort, and N’Diaye was ineffective and looked lost.

8. Appointing Paul Hart – Yes hindsight is a virtue, however the appointment of Paul Hart clearly did more harm than good. With his history of disenfranchising the dressing room, lack of time and options available to bring in new faces all meant he was on a hiding to nothing. Bodin knows the players and I’m sure would’ve got more out of them, to at least ensure we would’ve gone down fighting.

9. Individual mistakes – Haven’t there been loads of mistakes this season… Phil Smith’s distribution versus Hartlepool, Scott Cuthbert being caught in possession against Notts County… etc. etc., I’ll even go so far as criticsing Jonathan Douglas for shooting too often from distance in desparation for his first league goal with little sucess (1 goal from 43 shots in 39 games). The point is all players can shoulder part of the blame for our failures.