In the first of a new monthly feature, replica kit collector Dan Castle of swindontownshirts.com reviews the 2009/10 Adidas home shirt that, for whatever reason, didn’t get to grace the pitch at Wembley…

It was kind of a big deal. I mean on a day-to-day basis it meant nothing, but it was no doubt a big deal for Town fans as the huge global sports monster, Adidas was going to be the kit supplier for Swindon Town starting in 2009.

To appreciate the significance of this news you need to know something about every kit made for Swindon over the previous eight years.

During that period there was a procession of uninspiring Sunday League manufacturers such as Xara, DGI (more about them some other time) Strikeforce, Lonsdale and then Lotto. Lotto were a semi decent brand, and the 2008 shirt was beginning to turn a corner. However the previous 2007 shirt, voted the worst of all time on this site’s very own Hall Of Shame, had already tainted the product for many fans.

Then along came the famous three stripe brand and using a striking template, the strangely named ‘Golpe’. It is best described as a single colour shirt cut through with an asymmetrical line that runs down the left side. 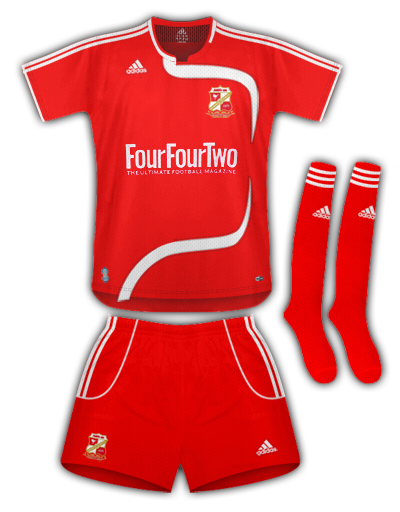 The Adidas deal was set up by previous chairman Andrew Fitton while the actual template design was chosen by former Head of Retail Clare Scarth and Nick Watkins.

Of course keen eyed fans already recognised this shirt as being worn by Liverpool as a European shirt in 2007, as well as worn by teams as varied as Newcastle Utd,  Marseille, Benfica and Peterborough.

Adidas as a brand sells! For fans brought up on a procession of lower league names (Xara/Strikeforce/Lonsdale) the chance to own and wear the famous three stripes in our colours was too good to pass up.

Now Head of Retail at Cardiff City, Clare Scarth said that “going to Adidas saw a large uplift in sales and found the club re-ordering from spare Adidas stock to fulfil the requirement of fans after the Christmas period.”

I certainly went and bought one in the first week it was out, something I hadn’t done in years.

Compared to previous shirts this 2009/10 home kit was an exciting design. The use of asymmetry always divides fans of football design, but this was very subtle with the stripe continuing into the shorts. 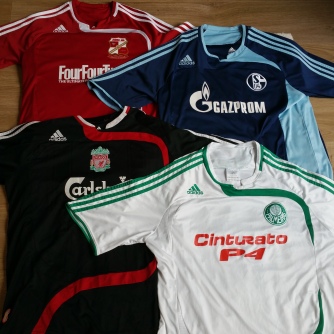 Swindon 09 home shown with other shirts in this template style, Schalke 04, 07 home, Liverpool, 07 3rd and Palmeiras (Sao Paulo) 07 away

The coolest sponsor we ever had, EA Sports on the rear of the home shirt?

Look beneath the surface though and as good as the shirt was it was still a template, and a two year old one at that. While Liverpool and Chelsea, as huge global names could get bespoke kits made from the German giants, Swindon had to choose from specific designs which they then could change the colours too.

However the fact that Adidas along with FourFourTwo and EA Sports were on our shirt rather than Lotto and a bunch of failed local builders’ meant a lot to fans who thought the quality of the shirt might be a reflection of the way the club was finally being run.

Unfortunately this red home shirt didn’t grace Wembley as Town made the 2010 League One play-off final. Despite no colour clash with Millwall’s blue, Town players decided to wear the predominately white away kit in a decision fit for the Washbag’s Hall of Shame…