Seven days ago I wrote of disappointment and frustration over an FA Cup defeat at Cheltenham. As we know a week is a long time in anything, be it politics, or life generally. You just never know what the next few days will bring. That was certainly the case in one of the most enthralling football matches I’ve seen in ages.

The local derby against Bristol City had it all. The early sending off, a cracking atmosphere and, of course, a brilliant goal. All right the result went our way. Even so it was a game that you couldn’t take your eyes off. If ever there was a day to show you why supporting a team can be so magical, this was it. Yes, we we’re let down at Whaddon Road. Yes, we were frustrated and angry at the performance. Those feelings disappeared at five to five on Saturday. Can there be anything better than a narrow win over your local rivals to restore a faith that may have been ever so slightly dented? It was tremendous! Even now I can feel the buzz of that final whistle. If you could bottle that moment and sell it in the club shop it would fly off the shelves. 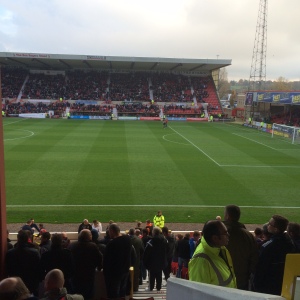 Of course there was controversy. Of course there were moments that shredded your nerves. Would you have had it any other way? You see it was an occasion. So often games that have been hyped up fail to deliver. How often have you watched an England match that’s been so built up only to see your interest wane as the minutes drag by? Have you caught yourself trying to relive that incredible run by Michael Smith? A goal of such quality that had it been scored by Lionel Messi people would have been purring over it for ages. By the way can anyone answer me this? Why doesn’t the Town End have a song about Michael? It should have.

Maybe we’ll come back to reality at London Road this coming weekend, maybe we won’t. One thing is for sure, the win over Bristol City contained everything you could ever want as a Swindon Town fan. As bad as Cheltenham was, this was better. I’m smiling even now!

Okay, that’s in the past now and as always we have to focus on the future. We have two internationals back in the fold in Massimo Luongo and Yaser Kasim. Both of whom performed superbly by all accounts for their respective nations. Bit of a selection dilemma for Mark Cooper then. I’m sure the Town boss won’t loose any sleep over problems like that. Having moved up to second in the league, this is a real chance to cement a position in the top three and be looked upon as bona fide challengers.
Looking forward to it!