A significant percentage of Swindon Town supporters would welcome a return of standing areas at the County Ground. Ron Smith analyses the results of our recent safe-standing survey.

Our Safe-Standing Survey has revealed 87% of the 619 Swindon Town fans surveyed would support the provision of safe-standing areas to form part of the County Ground redevelopment. This result provides welcome backing for the Football Supporters Federation ‘Safe-Standing Campaign’, highlighting appetite in Wiltshire for a change in the regulations which presently preclude a return to standing areas at the County Ground.

Of the 604 who responded to Question 2, the greatest percentage considered the total area which should be allocated to safe-standing should form at least 20% of a future 20,000 capacity. Interestingly the order of preference matched the percentage of capacity, clearly showing a desire for as much space for standing as possible in the County Ground redevelopment. 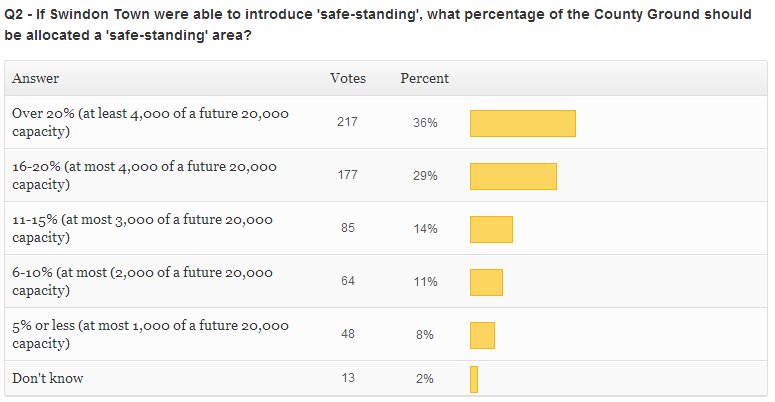 Question 3 sought a view on the preference for the location of any safe-standing area. Unsurprising the Town End won a 74% share of the 594 responses to this question. While this is perhaps an obvious outcome, it nonetheless confirms little support for standing areas on either of the side stands.

To understand the effect of safe-standing on match day attendance, Question 4 sought your views on how often standing tickets would be purchased if going to a game. Of the 585 responses, 75% of supporters would buy a standing ticket at some point during a season, with 21% always preferring a seat and 4% undecided.

40% of the Swindon fans surveyed would always buy a standing ticket, which if representative of attendances, would indicate a very high demand for standing at around 2,800 based on an approximate average attendance of 7,000. This demand also backs the preference in Question 2 for at least 20% of the County Ground capacity to be devoted to standing.

Unfortunately without data on whether respondents attend matches, it is not possible to speculate by what percentage Swindon Town could expect the matchday attendances to increase by with standing areas. Nonetheless, the results indicate a net increase in supporters through the turnstiles may be a likely outcome.

61% of the 576 responses to Question 6 would consider the price they were willing to pay for a safe-standing ticket was ‘slightly less than the price of a seat’.

With only 17% considering a safe-standing ticket was worth as much as a seat, the vast majority of supporters surveyed would not be happy if they were not offered standing at some sort of discount.

Standing areas are sometimes perceived to be directly linked to crowd trouble and safety issues, however only 9% of the 590 responses to Question 7 considered the introduction of standing areas would make spectator safety worse at the County Ground.

Considering current persistent standing in the Town End is taking place in a cramped environment with seats acting as potential trip hazards, it seems logical that designated standing areas could provide a betterment to safety.

If people stand, they do so in seated areas, where not everyone wishes or is able to stand; as a result your view may become restricted. Question 8 asked whether the introduction of safe-standing could improve your view during a match. 37% of the 575 responses stated their view would be improved to some extent by safe-standing, with the majority considering their view would be unaffected.

With all-seater stadiums derided as a key factor for the lack of atmosphere at Football League grounds, Question 9 asked whether safe-standing would improve the atmosphere at the County Ground.

A massive 88% of the 581 responses favoured safe-standing as a method to improve the atmosphere, with 60% considering it would be ‘significantly’ improved. Frequent away supporters who have taken trips to those lower league grounds were standing still exists will testify of the power congregating on a terrace can do to generate an atmosphere.

The final Question 10 asked if safe-standing would improve your matchday experience at STFC. Unsurprisingly, given the nature of the results so far, 79% considered standing would directly enhance their enjoyment of the County Ground. While the exact reasons are not specified, the widespread recognition in this survey that standing could: result in an improvement in atmosphere; improve safety; improve your view; and offer a cheaper method to attend matches, all could contribute to improving the matchday experience.

The onus is now upon Swindon Town Football Club to take into account this clear support for standing in their discussions with the Football League, relevant authorities and, of course, in developing the design for the County Ground redevelopment. The option is available to the club to further explore the demand for standing with supporters – through conducting their own survey – which I hope would reflect the results that we see here.

The results show it could be in the club’s interest to pursue the introduction of safe-standing. The appetite for watching a match while standing is very strong – this is despite Town fans being unable to legally stand at the County Ground since May 1994 – with 75% of supporters surveyed stating they would buy a standing ticket at some point during a season.

The evidence also indicates a potential net increase in matchday attendance could be likely following the introduction of safe-standing areas. This may provide an opportunity to raise matchday revenue, as well as improving the atmosphere and the general matchday experience, which those surveyed considered would be significantly enhanced by standing. Raising matchday revenue is a hot topic given the discussions on turnover and the wage cap restrictions over the past week; a matter which I expect the incoming Chairman Sir William Patey will want to further investigate standing as a potential driver to increase revenue. 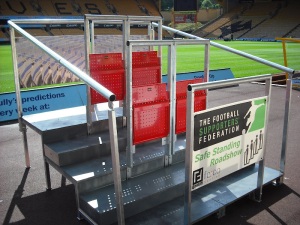 Public concerns about standing being unsafe are supported by only 9% of those surveyed. The majority considered safety would be no worse, perhaps even improved through managed and safe standing areas. Clearly any widespread fear concerning inherently unsafe standing areas does not materialise in this survey.

Turning to how safe-standing could be implemented in the County Ground redevelopment. The highest percentage of responses favoured devoting a greater than 4,000 of a future 20,000 capacity to safe-standing. Devoting this high proportion of the capacity was backed by 40% who would buy a standing ticket all of the time. Given the Town End is clearly the favoured location for a standing area, the real question is would the club devote the entire rebuilt end to standing?

We already know that the design being considered is two tiers, divided by a row of executive boxes and a probable capacity of 3,500 to 4,000. Implementing standing on the upper tier may therefore not be feasible, however the lower tier would provide the best opportunity for safe-standing to be implemented, even trialled. It would therefore be appropriate for the design of the lower tier and rake of the stand to be flexible to accommodate both seated or standing supporters. With the new stand potentially outliving many of us, it must be adaptable to allow for changes in the Regulations which may permit standing. Implementing standing at a future date may still be desirable as our survey confirms there is a demand from supporters and potentially in the best interests of the club.

Perhaps the club could follow Peterborough United’s example and install rail seats in their new stand, which can be fixed to the seat down position until such time as the seats can legally be locked upright.

The Posh are just one of a number of Football League clubs, including Ox**rd United, who support the principle of safe-standing. Given the 87% of Town fans would support safe-standing, please can our Club also come out in support of the Football Supporters Federation Safe-Standing Campaign!

Thank you for taking the time to respond to this survey. I’ll ensure these results will be brought to the attention of STFC and the Football Supporters Federation, and look forward to reporting feedback from the Club in due course.

For more on the restrictions which prevent STFC installing standing areas please read our article ‘Could Standing form Part of the County Ground Redevelopment’.