You’ve read many great factual reviews of the season, Alex Cooke takes a more personal view of 2011-12 and how it has changed how he watches Swindon.

2011-12 was a season played in the full glare of a nation’s attention. The media with their magpie-attention span were periodically fascinated because of who stalked the touchline, rival football fans saw Swindon in HD through Town’s many cup success and, for almost the first time, I watched the majority of the matches free from the blurring effects of beer due to the arrival of my second daughter. I also starting writing for The Washbag. 2011-12 turned out to be a bit of a revelation, for all of us. 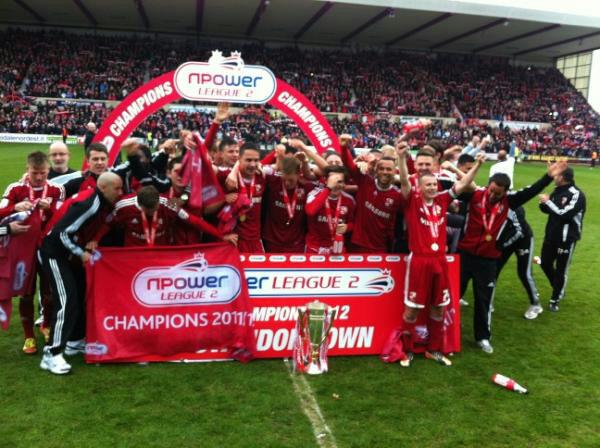 It was a season in which everyone had an opinion on how Swindon, and Paolo Di Canio in particular, would do. Fortunately Jeremy Wray got his pre-season prediction closer than anyone else’s though.

“…I can’t wait for Paolo to get here and get started,” the interim chairman said before Di Canio’s media-unveiling. “When you see the man’s passion and love for the game, you will see why he stood out above the other candidates – he’s infectious. He’s already shown such pride and attention to detail, and it’s an exciting time for Swindon Town.”

Then there was the issue of the manager – too inexperienced, too unstable, too flighty said the pundits– and sometimes they were right: signing Ibrahim Atiku and Mattia Lanzano, his sending off against Rotherham, Leon Clarke and both games against Oxford showed a man liable to ludicrous displays of emotional and tactical naivety. But what we also saw fairly quickly was his abilities as a leader, if not a recruiter of men: Raffa De Vita was converted from lightweight striker to goal-scoring wide midfielder, Alan McCormack turned from impulsive midfielder to calming centre back and Paul Caddis went from early-season head-down runner into marauding full-back. It was real proof that Di Canio and his technical team could really coach a side and change where, and how, individuals played.

While my personal season took a short break in mid-October for the birth of child number two, Town had begun to change the national newspaper’s narrative and the columnists’ minds. The early defeats dried up and wins began to become almost the norm, but their attention was really grabbed by the FA Cup. While I had to stop watching the wonderful win against Huddersfield just after Raffa De Vita had stroked home Simon Ferry’s cutback to take the littlest one to hospital, no one still believed you couldn’t play a passing game and win in the lower leagues. It was a week before my family were all once again safely back home and I finally saw just how wonderful Town’s victory over the Terriers was, but it was worth the wait. The wonderful football played in the win over Wigan confirmed many in that opinion. I wasn’t there either but again a DVD allowed me to I count passes and to watch players who most don’t normally watch, and those who we can’t take our eyes off.

As the year turned the side became more settled and more confident. The homes matches I saw became almost mundane as teams were brushed aside, not through tactical innovation such as inverted wingers but simply though Town having the better, fitter players. However, domestic duties did force me to miss many of the night games – including some against the best teams in the division, such as Shrewsbury and Torquay which certainly sounded more tougher on the radio.

January’s addition of Luke Rooney brought excitement and flair but it was Benson who added the final piece – the cutting edge – with mobility, ability and determination. The only shame was that he was forced to play as linkman and finisher due to the poor quality of the strikers signed to go with him: Jonathan Tehoue and Ronan Murray. Again, questions had to be asked about Di Canio’s player recruitment.

One aspect which can’t be doubted in this the season has been the board of Swindon Town’s support for Di Canio. While most recent Town bosses asked to pick the team up after relegation have done so with background ‘financial engineering’ or at least boardroom disharmony and disruption, Di Canio has been backed, supported, paid and, if rumours are true, even protected throughout. Others outside the club might have doubted, and maybe even wobbled as the defeats mounted, but the boards support has been unwavering and so very unusual.

In a season in which victories came so regularly, defeats actually became the key points for analysis. After all something must have gone wrong? Chesterfield at Wembley fits that model exactly: Swindon expected to win, Di Canio expected to win, hence attacking the Spireites as if Town were the team from the higher league. Instead Chesterfield played intelligent cup football, waiting for the breaks, keeping their positions and then butchering Swindon on the break once Town’s plan A failed. There was no shame in the defeat, just a little hubris and a sign that Di Canio still had something to learn about handling good teams who weren’t playing as if they expecting to roll over Swindon – as Wigan, Huddersfield and Leicester had.

The only real upset in the final weeks of the season was the gradual decline in the performances once promotion was in sight. Some will point to the accusations of nights out but Di Canio showed his new maturity by dealing with it responsibility and, most importantly of all, equally. Largely Town became less potent due to disruption on the right-hand side of the team. Injuries to Matt Ritchie and Paul Caddis robbed Swindon of much of their forward drive but also of their creativity as it Caddis had become Swindon’s best cross-field passer, opening up the left flank for Rooney or Lee Holmes to attack to the full-back.

But that is the subject for another blog, when I can finally convince one of my children that watching the JPT DVD and counting every pass that Swindon’s captain is a good way to spend a sober Saturday afternoon. That is until 2012-13 begins anyway.

View the STFC squad, table, fixtures and results for the 2011/12 season on swindon-town-fc.co.uk