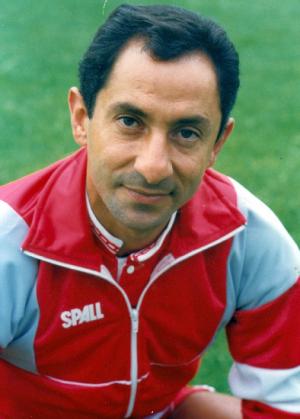 Ossie Ardiles succeeded Lou Macari back in the summer of 1989 and also in this countdown, as we enter the top five Swindon Town managers.

The small and smiling Argentinian became Swindon’s first manager from outside of the home nations with the task of building upon Lou’s meteoric rise up the league. Attracting Ossie was a significant coup. Only five years previous Town finished within ten points of facing re-election to stay in Division Four, yet now could count on a World Cup winner and creative linchpin for Spurs, as a first promotion to the top flight was the objective. The contrast couldn’t be greater.

It seems strange now that Ossie wasn’t the board’s unanimous choice. Dick Matick reports in his book ‘The Robins’ that it took Brian Hillier to pursuade the remainder of the board to appoint Ossie. And why not, he fitted the bill, to continue to build the club through a young and hungry big name manager. A situation we find ourselves in again with Paolo Di Canio.

That 1989/90 season started against Sunderland at the County Ground with a 2-0 defeat and it ended, at Wembley, with a reversal, beating Sunderland 1-0 at Wembley. However, within days this win became our biggest defeat as demotion rocked Wiltshire and beyond.

With Ossie broken after his efforts were punished by events out of his control, it comes as no surprise he began looking over his shoulder at relegation in 1990/91. Out went Macari mainstay Dave Hockaday and Ossie’s re-fashioning of his side continued with the incoming Micky Hazzard and Nestor Lorenzo brought into add more flair into the team’s spine.

After failing to build upon a fair start – with 14 points from 8 games – Town’s slide started after a run of seven winless games. With indifferent form continuing the hammer blow came in December, selling midfield dynamo Alan McCloughlin for a record £1m to pay the bills. Despite £400,000 spent making Lorenzo’s loan permanent, Ossie couldn’t strengthen as incoming chairman Ken Chapman sought to run the club as a business. Matters came to a head in March when Paul Bodin and John Gittens were sold for a combined £950,000, giving Ardiles an easy decision to resign and take over at Newcastle United with promises of money to spend.

Good, Bad or Ugly? – Good – To immediately continue Macari’s on the field success whilst introducing a change of approach is a fantastic achievement. Had it not been for past events Ossie would’ve been there to guide us in Division One and you never know what might’ve been. I sort of feel Ossie should’ve really stayed around for longer as he never fulfilled his managerial potential elsewhere. After demotion you can understand his frustrations because of enforced player sales as the club went down a new route of financial prudence, yet with more at his disposal he guided Newcastle to the basement of Division Two and only lasted 12 months. The grass wasn’t greener on the other side…

Click here for a full list of the managers in the countdown so far and their scores.

See my earlier post for an explanation of how the scoring works.