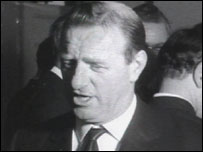 Returning for a second stint as manager is perhaps never a good idea, yet Danny Williams answered the Board’s call to save Swindon from relegation back to Division Three in 1973/74.

Town were firmly cemented at the bottom of Division Two, having been so for the majority of the season, with six points to make up to catch 19th placed Oxford United.

With just nine games to go Danny needed an unlikely eight wins to salvage anything from the season. So Danny was faced with an impossible task to rectify the damage done under his predecessor Les Allen.

Danny inherited an unrecognisable side from that he left in 1969, with only Frank Burrows, Joe Butler, Rod Thomas and John Trollope remaining from his previous spell. Not even a hero could save Town from returning to where Danny had fought so hard to leave, as Town couldn’t muster a win until his seventh game in charge, finishing bottom and a full ten points adrift.

Back in Division Three Danny guided Town to a competitive charge for promotion and he nearly got Swindon back up at the first attempt. Rarely outside the top five all season, 4 defeats in a row in late February / early March cost Town as they slipped 3 points behind 3rd. In the end not even 5 wins from the final 6 games and Peter Eastoe’s 26 league goals wasn’t enough as Charlton Athletic snatched 3rd and pushed Town into 4th by 2 points.

After narrowly missing out on promotion Town more than flirted with relegation to the fourth tier for the first time in 1975/76. As I’ve previously reviewed, Surviving the drop was no mean feat for a Town bereft of confidence until the returning Don Rogers inspires the team and ultimately survival on the final day.

The 1976/77 season is best remembered for the impressive FA Cup run, taking in a 3rd Round win over a Fulham side containing Best, Moore and Marsh, then following it up with that goal by Kenny Stroud in the 4th Round draw with Everton at the County Ground, only to fall to the narrowest of defeats in the replay having been a goal ahead with eleven minutes remaining Dave Jones to hit a late winner for the Toffees.

A similarly successful cup campaign was the end result for 1977/78 as Danny Williams guided Town to the 4th Round of the League Cup and the FA Cup 3rd Round and a defeat by the new emerging force Nottingham Forest.

With Town failing to make any inroads at the top of the table for 3 seasons the Board decide time is right to replace Danny, but our League Cup winning manager’s services are retained as he moved upstairs to become General Manager, a position he retained until 1985.

Good, Bad or Ugly? Good – Danny clearly cannot be held responsible for our relegation from Division Two and with his side only a win short of promotion back at the first attempt the following year. Despite the near relegation in 1975/76 Danny ensured Town never suffered that fate in his final two seasons, finishing far enough up the table to ever be really involved in a relegation fight. Perhaps his second stint at Town will always be fondly remembered, not least for the excellent runs in both FA and League Cups, with cements his position this high up the rankings.