I don’t suppose you need much reminding what occurred in May. It was a truly memorable month and culmination to the season of many moments of agony and ecstasy.

With Town 4 points behind Leeds, the visit of Brentford to the County Ground required a home win coupled with both Milwall and Leeds picking up no more than a single point each to take it to the final day.

After bottling it in recent weeks Town just about pulled it out of the bag and secured a narrow 3-2 victory over the Bees. After Ben Stevens got the second Brentford goal with half an hour to play, it was a nervy final third of the game, compounded by the 12 minutes injury time after Balkestein suffered a serious head injury.

As results elsewhere went in our favour we were back in with a shout of finishing 2nd, however so were Leeds, Millwall, Charlton and Huddersfield.

At Millwall we started brightly and then it all went wrong as Millwall showed just how well organised they were, as we would find out a few weeks later…

Whatever happened at The New Den promotion for either team depended on the Leeds result. As news reached us that Leeds were ahead and then had won… the season was to continue…

Charlton came to Swindon for the first leg of the semi final. It was difficult to separate the two teams in the two previous games this season… it would be no different in the play-offs.

Town took the upper hand with a 2-1 victory, denting Charlton’s pre-match hopes for a draw.  Even Vincent Pericard turned up and put in a performance!

The second leg was a rollercoaster ride of emotions. 2 nil down at half time, desperately looking for options and a way back into the game, only for Gordon Greer to be rightly dismissed for a connecting high foot on Deon Burton…a classic image, although not forgotten as we could’ve done with Greer for the final…

Strangely Town found it easier with 10 men and were more than a match for Charlton, Danny Ward grabbing the all important goal to make it 3-3 on aggregate. After this goodness knows how we held on and Charlton didn’t progress… well that’s football.

So it went to penalties, Charlton skipper Nicky Bailey missed, we scored all 5, Wembley here we come! 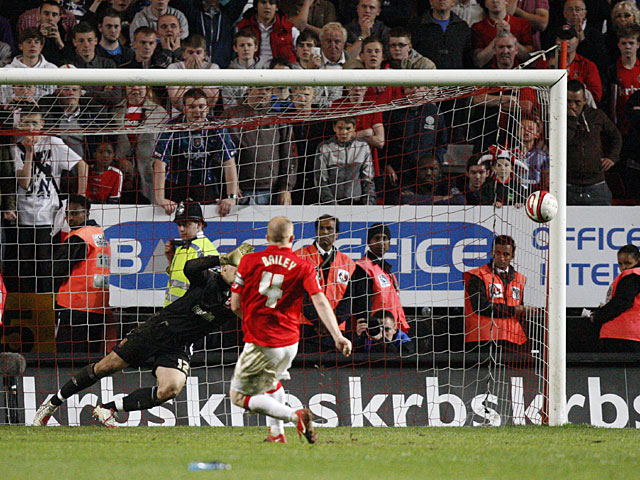 As for the final…we didn’t turn up and Millwall wanted it more to avenge their final defeat the year before, they deserved their 1-0 victory. For us it the match will always be defined by one moment… 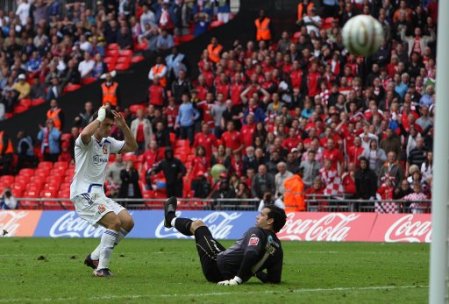