A form for relegation?

After 37 games Swindon Town have won 36 points. Those good and pathetic at mathematics will equally realise that’s now less than one point secured per game, a woeful return.

Some of our readers will have been following the average points per game graph on the fantastic swindon-town-fc.co.uk. This plots the club have been teetering on the abyss of relegation for several months, however with nine games remaining the ‘certain relegation’ prediction seems as real as it’s ever been this season. A projected points return of 45 is four short of the minimum that’s been required to avoid relegation in the past ten seasons in League One. Realistically, Town need more than 50 points.

With the impending doom of League Two, playing a division below rivals Oxford United for the first time since 1987/88, straws are being clutched in the faint hope this won’t happen.

Unfortunately, in the past five seasons, as the below charts show, a side with 37 points or fewer (on matchday 37) has saved themselves from relegation on just five occasions – Oldham Athletic in 2015/16, Colchester United in 2014/15, Notts County and Crewe Alexandra in 2013/14 and Oldham Athletic in 2012/13.

To achieve this feet an average of 15.2 points were won by those sides in their final run of games, equating to an average of 1.65 points per game remaining.

If Swindon Town won 1.65 points for each of the remaining nine games the tally would be boosted by 15 points, with a final 51 point return.  Which should be enough…

But is there really a decent possibility of Town winning 15 points?

That points average is then used and allocated for each game remaining, relative to the opposition’s current league position, to provide a potentially more accurate basis for predicting the final points tally. 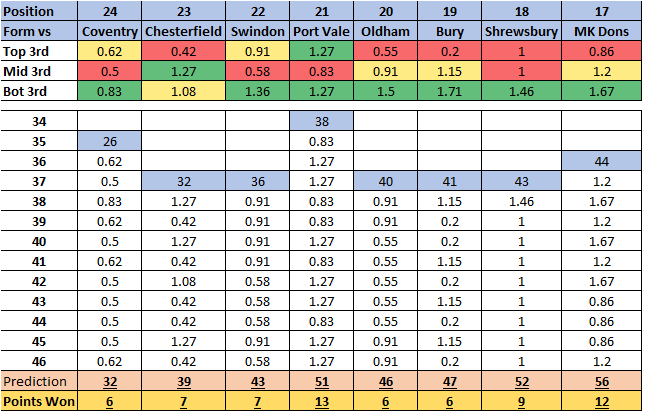 Unfortunately for Swindon, the games against the bottom third have gone. With fewer than one point per game secured against those in the middle and top thirds of the division, the circa 15 point tally looks a very distant possibility. A return of seven points from nine games and a total of 43 is projected. Relegation by early April looks likely with four tough successive games against sides towards the top.

Coventry are essentially down and must win eight of their final ten games. With 12 games remaining, Port Vale should have the opportunities remaining to climb out of the relegation zone. Bury are very vulnerable as they’ve a pathetic 0.2 points per game return against the top third, whom they face on five of their final nine games.

If the points totals are as projected, circa 47 or 48 points could be enough to finish in 20th position. So that’s 11 or 12 points, for Town to win, but four wins is unlikely given seven points won from the past 30 available.

We’ll all live in hope. The spreadsheet will be alive until survival from relegation mathematically impossible…