Rodgers’ extra inch, was Obika really offside and is Delf getting the idea?

Picking out some of the bits you might have missed from Swindon’s vital 1-0 win over Bradford City. Words by Alex Cooke.

Now Swindon’s inky-fingered hacks and CMS-jockeys have been (largely) welcomed back by chairman Lee Power, you’ll have already read plenty on Tom Smith’s fine performance as faux full-back and Jon Obika’s powerful display ‘up top’, but I’ve decide to pick out a few equally interesting, but less obvious points.

Did the ref give Anton Rodgers a few extra yards?

If you need to get a freekick up and over a wall, would a little more space be useful? Probably. And it looks like Rodgers had exactly that extra room on Saturday. It is pretty clear, thanks to the work of Marcus Cassidy. Got your counting fingers ready? The six-yard box is two stripes deep (and the 18-yard box contains six stripes) so one stripe = three-yards. Well, you can count them yourself but that is almost five whole stripes between the ball and the wall (3×5=almost 15 yards). Cracking free-kick though, wasn’t it?

Nathan Delfouneso is starting to understand how to play as a wide midfielder.

He might have spent most of his career leading the line but Delfouneso is showing signs that he can play in the limited spaces of the centre. Obviously he missed a fairly simple header at the back-post, and sometimes he pressed the opposition while leaving a simple ball straight behind him, but he also showed signs of good combination play – currently rare in a fairly disjointed midfield.

During a protracted build up on the right, Swindon had started to draw Bradford players over to that side with a number of quick, short passes. So when Anton Rodgers found Michael Doughty, the QPR man was able flip the ball to Brandon Ormonde-Ottterwill to overlap and get a free shot on goal. The space for BOO’s run (out of shot) was made by Delfouneso dropping short and pulling his marker out of the Bradford defence.

How offside was Jon Obika? You can make your own mind up. 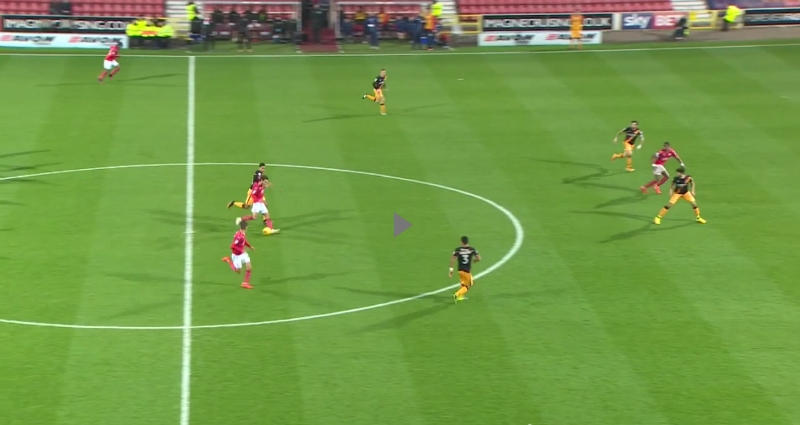 Bradford had some good chances.

PA chalked up 18 shots and 5 on target for the Bantams (to Town’s 13 and 5) but Experimental 361 came up with 2.2 expected goals for Bradford (1.3 for Town). But them is the breaks, and since we also rode our luck against Southend, they are currently going Town’s way.

Sean Murray is a long way out of the picture.

Can you spot Murray in this shot? Nope, that is because the highly talented and former Irish international has dropped behind Ellis Iandolo, James Brophy, Luke Norris and Nathan Delfouneso for the midfielder positions. Despite helping Charlton to score an own-goal, Murray stayed on the bench against Southend and remained there even while Iandolo was being skinned by Bradford’s number 3, James Meredith.