As someone who remembers the bad old days of the seventies and eighties, this isn’t what we want in 2016. The presence of Millwall means heavy policing and the possibility that something other than football might happen. It’s disgusting and a stain on the game we love.

It should have stopped years ago and for the life of me I can’t understand why it hasn’t. Anyway enough about the idiots who hang around saying they support their team and yet do their best to drag it’s name through the mud.

So, let’s concentrate on the match itself. The first half was pretty dismal wasn’t it? Two goals down early on and it looked likely that the visitors would score a couple more to more than win the fixture.

Then a couple of Town changes and a fantastic fightback culminating in that dramatic late equaliser by Michael Doughty. It was a wonderful moment and the County Ground rocked. It didn’t mean winning a cup or securing promotion but it felt fantastic. Our team didn’t lie down and crumble, it fought and it played it’s way to a point which felt like a victory.

Terrific stuff, continuing the great start under Luke Williams. It also means the faint chance of the play offs is still there. Something which seemed impossible a few weeks ago. Saturday was a day I’ll remember for a long time. I’m sure you will too.

Another memorable event for me this week, came with a meeting with former Town striker Dave Syrett. A striker who played for Swindon with great distinction in the 1970’s. As I wrote earlier in the season, Dave is undergoing treatment for a brain tumour. This on top of his battle with prostate cancer.

The treatment is going well and Dave is in great spirits. The battle is not yet over but there’s a kind of truce at the moment. I’m not surprised how Dave is dealing with this. He was a brave forward who went in where the boots flew, scored memorable goals in memorable games. There’s that word again. It sums up Dave Syrett.

This weekend a couple of thousand Town fans will travel to the Midlands to watch the match at Coventry. Should be a carnival atmosphere approaching that of a couple of years ago when Swindon won Kevin MacDonald’s first game in charge. Last season there were somewhat fewer for the Monday night game at the Richo. The hardy few that were there saw a memorable three nil victory. Here’s hoping for similar on Saturday. 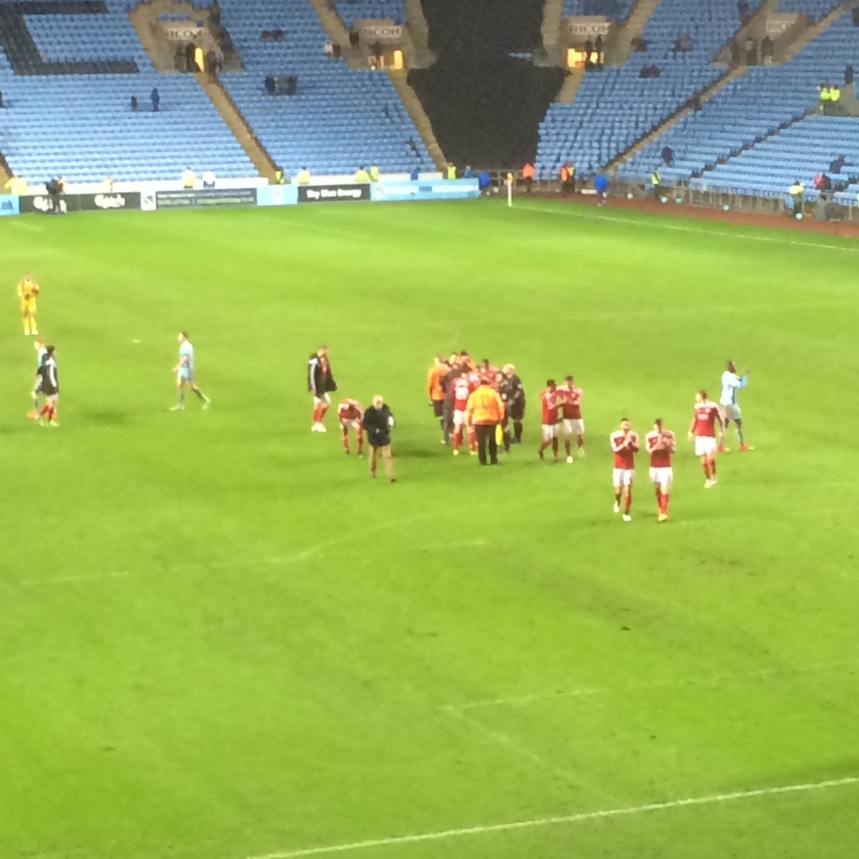