Things are looking up…

Don’t know about you, but this has been my favourite week of the season so far. It was the week when this so far difficult campaign suddenly didn’t look quite so difficult. It’s also the week when Swindon Town could stop looking down the table and begin to look up.

After two wins in the past seven days, we stand within two wins of a play off place. Who’d have thought that before Christmas.

I’ve said many times this term that a top ten finish shouldn’t be beyond them. That’s certainly looking likely now and who knows what beyond that. Okay let’s not get carried away and there’s a difficult trip to come this weekend to Oldham – weather permitting. On current form though, that shouldn’t scare the Town.

Last Saturday it was a difficult trip to Peterborough. It’s never an easy journey to London Road. An early start from Devon and cross country roads makes for a seemingly interminable traveling experience. Still when you get there your assured of a warm welcome from the a Posh mascot Peter Burrow, yes it’s a six foot rabbit, and the very nice burger van situated outside the ground. Inside, the stewards are chatty and pleasant, making you feel that you’re not just to be treated like cattle but like people. 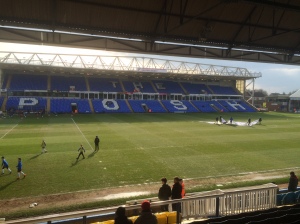 The game itself took a while to get going. The home side are awarded and score a penalty. A deserved lead on the evidence of a rather lack lustre first half display from Swindon. Second half is a different story though. A slight tactical change sees more of a grip in midfield and Nicky Ajose scores with an excellent free kick. The winner comes from the impressive Michael Doughty who’s been a really strong addition to the Town engine room.

A great win then and a rather more pleasurable journey home. Still long, but who cares when you’ve won!

Then on to Tuesday. A home game against Doncaster and the chance of four wins in a row. To be honest I think this was one of Swindon’s best displays of the season. A terrible refereeing decision on the stroke of half time led ironically to the opening goal. How a corner was awarded I’ll never know. Never mind, it led to John Obika ending his goal drought.

There was more joy for Obika after the break when he scored a fine individual effort, holding off the defender with great strength. A comfortable win and twelve points out of the last twelve. Terrific stuff. Nice to see warm receptions for ex team members Harry Toffolo at Posh and Andy Williams on Tuesday and deserved they were too.

So off to Oldham, the trip that has to be done. Always cold, always long, but somehow bizarrely enjoyable.