Jamie Stephens: Swindon to Liverpool and nearly a return

In the first of a new series, Steven Fyfe catches ups with some of heroes and the nearly-men of Town’s recent past.

This week, former youth team goalkeeper Jamie Stephens was kind enough to discuss at length his time with Town and why he moved to Liverpool before he’d even played a game. He also discusses his new life at Barnet and Newport, when he sold joining Swindon to Ty Belford and how he nearly re-signed for Town last summer.

So Jamie, you joined the Swindon Town academy in 2007 and stayed part of the set up for three years. What was the experience like?

“It was an excellent experience. When I moved away from home aged 15 I had to learn quick, but fortunately my house parents (Jeremy Newton and Kate Cady) were wonderful people, as was Matthew Clark whom I roomed with.”

“Working with Paul Bodin was fantastic and he had our team playing some great football. He really helped me settle in and we all had jobs which kept our team grounded. For 10 months I cleaned the boots of Phil Smith and then when Charlie Austin joined his too. They were both great lads and always had time for me.”

“As an academy they work extremely hard to prepare you physically and mentally for the first team and we have seen over the years plenty of Swindon academy players make it to the next level.”

As you alluded too, Paul Bodin had the side playing good football, were there any players you just knew were going to make it professionally, or perhaps some you thought would but didn’t?

“We had a fantastic team under Paul Bodin and it’s been great to see people like Billy Bodin, Nathan Thompson and Alex Henshall playing in the Football League. Billy and Alex were always both highly skilled footballers and are very exciting to watch. Nathan has done a fantastic job at Swindon and it’s really good to see him thriving in the first team with over 100 appearances.”

Before making a senior appearance for the Robins you were off to bigger and potentially better things when Premier League side Liverpool came and signed you in 2010, how did that feel?

“I was really excited to join one of the best clubs in England, but found it very hard to leave Swindon with the club having done so much for me in my time there. My managers Danny Wilson and Paul Bodin and also goalkeeper coaches Steve Hale and George Wood were extremely helpful in the moving process and all the lads really supported throughout the transfer.”

You were there for three years, how was that experience and how do you look back at your time at Anfield?

“I thoroughly enjoyed it. It was an unbelievable set up, a massive club with incredible opportunities and a passionate support.”

“Whilst I was there I worked under some of the best coaches in the world and had the opportunity to learn from the some of the greatest players of our generation. I was able to play at some fantastic stadiums and the players and coaches really pushed me to achieve the best. It will always have a special place in my heart.”

Despite signing a professional contract, you were to leave Liverpool after three years. Why was that and how difficult was it a decision?

“Leaving Liverpool was also extremely difficult but at 19 with an unknown future at the club, League Football was very appealing to me.”

“There was a small opportunity to join Swindon before I signed for Newport but certain circumstances made the deal difficult and I was more than happy to be a part of the team at Newport.”

“The Newport staff, especially Ryan Mackerness made the transition really easy and all the lads looked after me from Day 1.”

Last summer you were realised by Newport  County and were seen back in Wiltshire during pre-season training with Town, was that with the aim of signing back for us or more a stop gap to your next move?

“Fortunately I’ve got some great friends in football, and one of them Steve Hale, the current Swindon Goalkeeper Coach. He brought me in and allowed me to keep fit during pre-season and I even got a few minutes under my belt.”

Was it much the same as when you left or completely different?

“I really enjoyed being back and seeing some welcoming familiar faces. There were also some improvements in facilities and there was a new management team.” 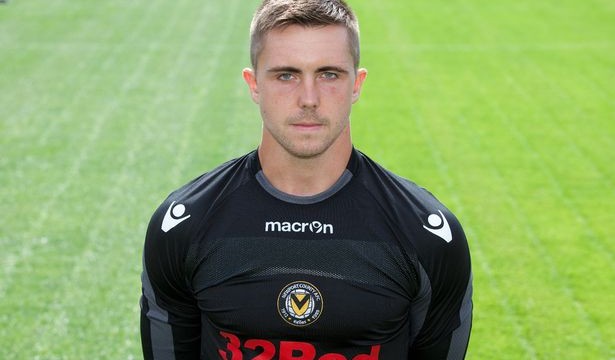 You are now playing in League 2 again with Barnet, how are things going?

“It’s been very good. The manager has been excellent with me and extremely supportive. The lads are a superb group; work exceptionally hard and we all fight for each other. We’re currently (at time of writing) 18th but we all know what this team is capable of and we are pushing to be further up the table. We are looking to put a few more good runs together and build on our fantastic home form to ensure we secure as a good second half to the season.”

What memories do you have of your time with Swindon?

“After I had left Swindon for Liverpool I still went across to Wembley with my dad to watch Swindon play Millwall. Unfortunately the result on the day didn’t go our way it was still a great occasion and a testament to a brilliant season.”

“Winning the League Title with the Under 18’s whilst still 16 was a huge moment for me and it was really a special occasion.”

And how about career highlights to date?

“Either signing my first professional contract aged 17 for Liverpool, or making my League debut for Newport in our win against Accrington. I can’t choose between them!”

What ambitions do you have for the rest of your career, after all you are still only mid 20’s?

“To keep enjoying my football. I’m very lucky to have played with some excellent players and under some great managers. I’ve made a lot friends through football and I just want to keep working hard and play at as a high a level as possible.”

Jamie Stephens in action for Barnet vs Wolves – source http://www.newsshopper.co.uk/

Growing up, what professionals were your role models and made you want to be ‘keeper?

“Gianluigi Buffon. I used to watch his YouTube videos over and over. I can still remember him in the Champions League final in 2003 when I first began playing in goal.”

“As I progressed I continued to try and wear the same gloves and boots as him!… although I’m yet to wear an alice band haha”

Finally, during your time with Liverpool you were part of the same youth team as current Town stopper Ty Belford, from your point of view how good is he and did you talk to him about joining Swindon?

“Ty and I trained together daily for almost three years at Liverpool. I’m in constant contact with him… and to check if Steve Hale’s banter has got any better!”

“Ty is a top goalkeeper and I spoke with him before he signed and told him what a great club Swindon is. I told him he would be well looked after, that the fans would support him throughout and that the club suited his style of football.”

“Ty has incredible feet, can kick with either foot with every style you could imagine… just watch his side volley the next time you can!”

“It’s not been easy for him at Swindon because of the calibre of goalkeeper has been very high (Wes Foderingham and Lawrence Vigouroux). However I back him to keep progressing and I know he will get a chance to show his ability soon.”