Mike Minihane continues his look back 50 years to events at the County Ground, as Swindon Town returned to Division Three in 1965/66…

Top of the Charts:  Get Off Of My Cloud – Rolling Stones

After going through August and September without seeing a home goal, Town fans had been treated to a goal fest in October with 13 home goals in our four fixtures. It certainly had been a very entertaining month.  As November approached most of us thought that it was too good to last and we braced ourselves for a return to a run of scoreless draws. How wrong we were!

Our first game was at home to local rivals Reading and over 15,000 fans turned out hoping for an entertaining derby. They weren’t disappointed, well not the home fans at least. An in-form Jimmy Lawton put us in front in the first minute with his third goal in four games and a glorious Don Rogers hat trick in a twenty minute spell after half time put the result well beyond doubt. A Dennis Brown goal put the icing on the cake giving us an emphatic 5-0 win. We had now scored fourteen goals on our last four home games with Don Rogers scoring seven of them.

The following Saturday saw a break from Division Three activity with a FA Cup First Round tie against non-league Merthyr Tydfil. It was a game we expected to win but they were no mugs and we were always wary of being on the wrong end of an FA Cup upset. We needn’t have worried though. Jimmy Lawton had picked up an injury so Keith East was brought in from the Reserves. Those of us who were regular attenders at Stiffs games knew that Keith was quite useful and had been banging them in regularly. Keith was quick to take his first team chance and scored after only three minutes.

Merthyr were playing well however and restricted us to just the one goal in the first half. Early in the second half Keith got us a second to put us well in control and then proceeded to go on a goal frenzy adding two more in a three minute spell. Merthyr got a consolation goal and Roger Smart got on the score sheet with our fifth to give us an emphatic 5-1 score line. Even against non-league opposition four goals was pretty good going. Talk about taking your opportunity with both hands…or feet for that matter. 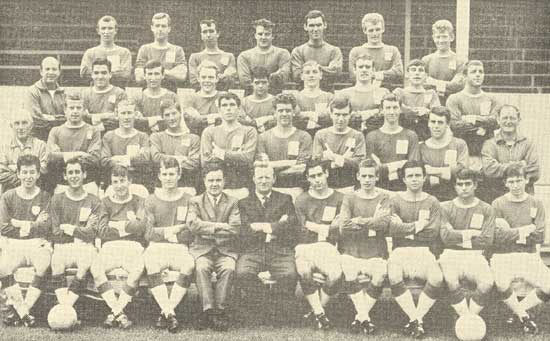 At this time I was working for Swindon Borough Council, licking stamps. Just about all the blokes working in the Civic Offices were football mad and the shared obsession with Swindon Town FC was a great leveller, even the lowest form of life like me could engage in football conversation with a God figure Chief Officer.

So after the game I was part of a conversation with some of the old boys and inevitably the topic of Keith’s performance was the big talking point. One old guy took the view that although Keith East had scored four he hoped that he wouldn’t take Jimmy Lawton’s place because although he could score goals Keith was ‘a bit of a Teddy Boy’. Jimmy had short hair and a very clean cut look; Keith in comparison had sideboards and chewed gum. I though this old guy was totally off his head, although I had the sense not to say so. With this added anti-hero quality Keith’s superstar status rose even higher in my book.

Not surprisingly Keith East kept his place for the next game, a home league fixture against Mansfield Town. Perhaps to show that his scoring the previous Saturday was not just a flash in the pan against lower level opposition Keith scored five goals in a resounding 6-2 win. Everything he touched went in; he looked like he could score at will. I clearly remember his fifth goal, scored at the Town End. Dennis Brown made an excellent run down the left and set Keith up and Keith duly scored. Dennis looked at the crowd and rolled his eyes as if to say everything’s going for this guy today. Keith had scored nine goals in two consecutive games; I can’t ever remember a Town player coming close to that and I doubt it will ever be surpassed.

The final game of the month was a tough away game to Queens Park Rangers where we lost a closely contested game 2-3. Naturally Keith scored to make his total ten goals in three games. Not surprisingly his scoring kept him in the side for the rest of the season and he ended up with 24 goals in 35 games, a staggering record. Don Rogers was my hero but for this period Keith was up there with him. Town had scored eighteen goals in four games in November, if you blinked to were likely to miss one: going to the Gents was totally out of the question. 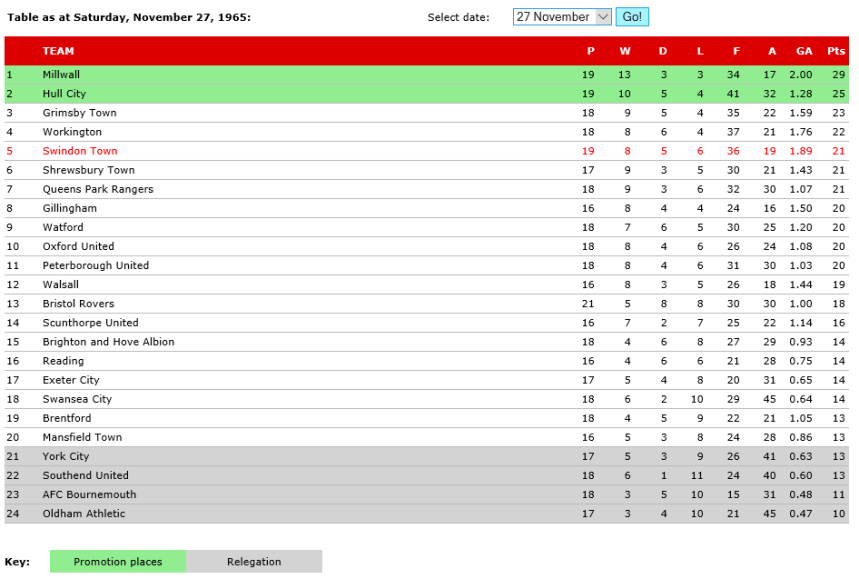 Table and results from swindon-town-fc.co.uk