Following the sacking of Mark Cooper we now can now rank him by his results in the Football League, FA Cup and League Cup to establish where he fits into our list of the greatest STFC managers…

This strategy relied upon a manager who understood his position within the club and, as a result, performed only a limited role as the face of the coaching staff and reluctant post-match interviewee.

At his disposal, Cooper was granted one of the most technically gifted groups of players to ply their trade at the County Ground. Massimo Luongo, Ben Gladwin, Nathan Byrne and others were supplemented by a steady rock in Wes Foderingham and an able defence not shy at playing with the ball at their feet.

To what extent that Cooper can be credited with some of the sublime football Town played is debatable given the strategy and a hands-on chairman. Similarly, the various bad runs – initially away games during 2012/13 and recently a rot setting-in throughout the past 7-months – cannot solely be attributed to Cooper alone.

With this background, it seems bizarre that Cooper has been linked with various high-profile managerial positions – Brighton, Sheffield United etc – over the past 12-months. Back in June, after the miserable play-off final defeat and during the end of weeks of speculation that he’d become head coach at Hillsborough, Ron Smith came to terms with his future departure. Ever since that point, and Cooper being confirmed to stay at the County Ground, it was almost inevitable he’d be sent packing soon as the assembled team had come to an obvious, and natural end.

So to his ranking, which scores Cooper’s performances in the Football League, FA Cup and League Cup (view our methodology here)…

Key achievements:
◾League One Play-off Final Appearance 2014/15
◾Preceding over the highest scoring drawing in the club’s history (5-5 vs Sheffield United)
◾An awful FA Cup record, joining four other former Swindon managers never to have won an FA Cup game they’ve presided over
◾JPT semi-finalist in 2012/13 beaten by Peterborough United courtesy of a penalty defeat (although the JPT has no weighting in this assessment).

With a score of 256, Mark Cooper is ranked as the 17th greatest Swindon Town manager in our countdown – between Louis Page and Sam Allen – in a middle-ranking position in the 34 managers. 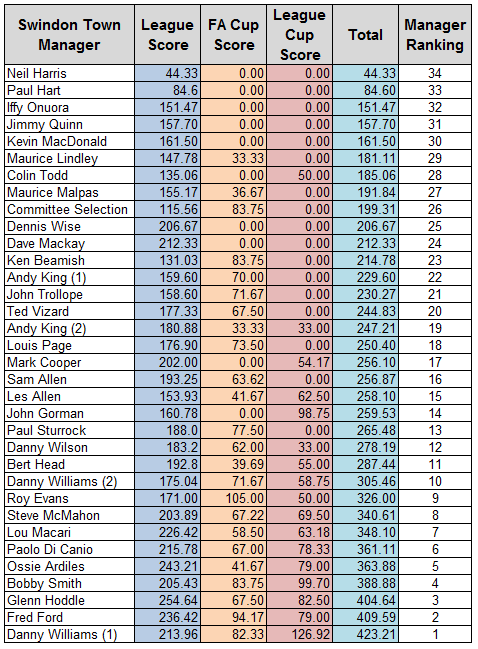 A ranking of 17th seems a fair ranking for Cooper. If only he’d won an FA Cup game or two then he’d easily push into the top 12 – so that’s punishment for pathetic defeats at Macclesfield and Cheltenham.

Where do you rank Mark Cooper amongst Town’s 34 former managers..?