“In my honest opinion there was a lot of lip-service being paid to problems that we had,” he said, “which by the time they were addressed, they were too far gone.”

But what the former Town midfielder forgot to mention was that he was very much one of those problems. And he was paid a lot more than lip-service.

After a promotion near-miss in the play-offs during 2009/10, Prutton was brought to Swindon by then manager Danny Wilson. He was reportedly signed to be the missing link between a robust defence and a prolific attack. Instead, with his unkempt mane and two sendings off, he was more like the missing link with the Neanderthals.

Even in the catalogue of errors that was Town’s season, Prutton deserves at least a chapter and a good chunk of the index to himself. But it hadn’t always been like that. Prutton had once been something of a prodigy. By the time he joined Town, he already played for Southampton and Forest and been capped 25 times by England at U21 level. He’d also been transferred for £2.5 million – at a time when that was real money, not just the kind of small change an oligarch wouldn’t both to pick out of their mistress’s crevice. 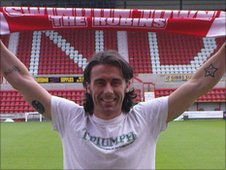 He was a said to be a tackler, a scorer, and a Premier League star.  And, as we all know, Premier League stars never, ever fail. Except, of course, it went wrong. Very wrong. Like pissing in a moving glass lift, it was visibly wrong on every level. At Swindon, Prutton played like less like a £2.5 million midfielder and more like Sam Beckett of Quantum Leap had just taken over his body. Oh boy, he was bad.

If at first Prutton played like he had a point to prove, flying into tackles and hammering in shots, but that quickly faded. In fact, few things have gone so quickly from 100% to nothing as he did – except my iPhone’s battery.

Prutton appeared in the middle of every game with great drama before just standing still, looking so old, unkempt and pensive that he could have easily played Thomas Cromwell in Wolf Hall. Perhaps it was his increasing age, perhaps it was being part of a team lacking quality at both ends of the pitch, but the game just passed him by.

Some people might look back on his two red cards and six yellows in his 46 league and cup appearances for Swindon as a display of passion. In reality, he was like the man who works at he sewage farm – he was just going through the motions.

If that wasn’t enough, many Town fans was were deeply unhappy with the midfielder’s displacement of a certain young bhoy. Due to the arrival of Prutton, there was no space for the energetic Simon Ferry in Wilson’s 4-4-2. And while Ferry wasn’t quite the cult hero he became – he hadn’t yet joined Twitter – it was clear Prutton wasn’t going to displace the tiny Scot is many people’s affections.

Despite his energetic start, Prutton, like any fleas in the hair of Jim Bob of Carter USM, was forced to the fringe. His two early goals didn’t secure his place as Danny Wilson tried everything to save his job. Prutton found his place taken by Ferry and Jon-Paul McGovern, adding only one more goal as the increasing depressing season ground on. However, the incoming Paul Hart seemed to like Prutton and gave him plenty of game time in his thrilling 4-5——1 system.

But the season ended in acrimony and relegation, and so Prutton wisely departed – it seems unlikely he would had thrived under Paolo Di Canio, despite their shared a history of ref-shoving.

If he has stayed for the second year of his contract, it would have been interesting what the Italian made of a player often rumoured to be part of a dressing room split. Whatever the truth in all that, Prutton can go into the STFC Hall of Shame on his performances alone.

Read More Tales from the STFC Hall of Shame…