Mike Minihane reports on Saturday’s victory at Crewe Alexandra, in a game full of debut goals…

I must confess to a bit of a soft spot for Crewe, I think it’s because coming from what was a railway town and growing up as a member of a railway family I feel some affinity with another town with a similar heritage. Their fans are warm and welcoming too.

On a fine sunny afternoon I found myself in an excellent seat level with the halfway line up in the Main Stand. It was a superb view, probably the best that any League 1 or 2 supporter had that afternoon and all for a £17 senior citizen ticket. Before the kick off there was an impeccably observed minute’s applause in memory of Tommy Lowry, Crewe’s record appearance holder who had recently passed away.

Crewe came into the game with only two draws in their first five games of the season and thus looking for a badly needed first win. Town dominated possession in the early stages but without threatening and gradually Crewe started to get into the game. Town were looking particularly vulnerable down the left hand side where Ormonde-Ottewill looked uncertain. Things improved when he was switched with Brophy. That aside the defence looked solid with Branco, my man of the match, winning everything in the air and looking composed bringing the ball out of defence.

Town only threatened once in the first half when Thomas let fly from Ajose’s pass but was well off target. At the other end Vigoroux saved well from Colclough and Turnbull made a crucial goal-saving block from Dalla-Valle. Crewe were definitely in the ascendancy and I was hoping we’d reach the interval on even terms. It almost didn’t happen as in time added on Vigoroux made a superb close range reaction save from Atkinson to keep the scores level.

It was no surprise when the teams came out for the second that Tom Smith had replaced Ormonde-Ottewill who had looked out of touch with the game. Smith, with his red hair and midfield industry, reminded me a little of a young Alan Ball.

Crewe continued to press with growing home support behind them but were nearly caught out when Ajose chased down a back pass but agonisingly put his shot from distance just wide of the Crewe goal. After riding their luck on that occasion Crewe took the lead with a shot from outside the box from King, the ball bouncing over Vigoroux’s outstretched hand.

At this point I could only see Crewe scoring again and us coming home pointless. Encouraged by their goal and the increased crowd support that it generated they looked set for their first win of the season.

To their credit Town refused to roll over and within two minutes they were level, courtesy of Smith’s superb strike from the edge of the area which had goal written all over it from the minute it left his foot, a wonderful moment for the young player. Much credit goes to Thomas whose tenacity won the ball back and kept play live after his own effort was blocked by the home ‘keeper. 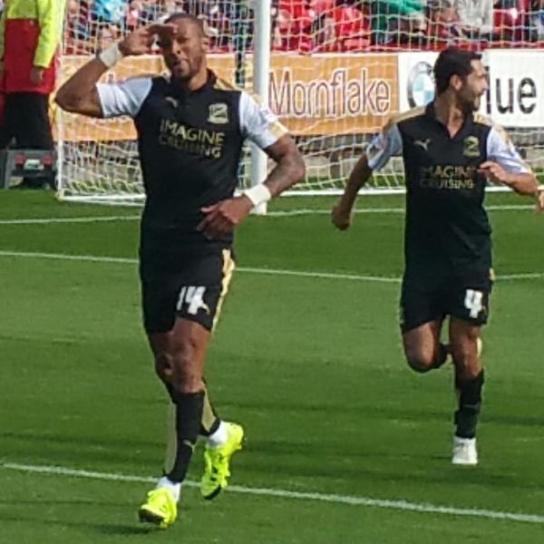 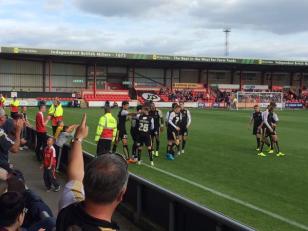 The deflation among the Crewe team and crowd was tangible and although they continued to come forward it lacked the conviction of their earlier efforts. Town seemed to sense that there was more in the game for them and started to look threatening.

Ten minutes from time their positive play paid off. A good run by the lively Robert let in Thomas who had a lot to do but showed strength and guile to roll his marker and thump a shot into the roof of the net.

Crewe rarely looked like getting back into the game after that and in additional time Brophy’s good run down the left gave Ajose the opportunity he had been waiting for and his emphatic finish was of textbook quality.

Regardless of the result this was an entertaining game and good value for money. Of course three away points is always a great return and to have both newly signed strikers getting on the score sheet was the icing on the cake.

There were lots of good performances. Branco was outstanding, well supported by Turnbull and a very solid performance from Brad Barry. I liked Traore’s commitment and organisation in midfield and Rodgers didn’t misplace a pass in the ninety minutes. Brophy had a decent game at the back and was instrumental in getting forward to set up Ajose’s goal. Robert ran intelligently all game showing some good skills.

Up front, Thomas was a real presence with his strength and control and took his goal superbly. Ajose deserved his goal for his constant running and probing up front. The rapport between Town fans and the players at the end was a joy to watch. As the teams left the pitch many Crewe fans around me applauded, I wasn’t sure whether they were applauding their own players for their efforts or the Town fans on the other side of the ground, I suspect it was the latter. Whatever the reason it was a nice moment.