So Wes Foderingham has finally gone…

So Wes has finally gone, old news I know, but for me it’s still quite a raw topic and a difficult subject to talk about. I have previous form when it comes to writing eulogies for departing players and managers, so it was obvious that I would produce something for one of my favourite players.

Words normally fly out of my brain when I’m doing this sort of thing, but for some reason I’ve struggled with this one. I would always make a start, it was normally on the lines of how pleased I was for him to be going to Rangers, a truly massive club despite their current league woes. But then a wave of swamping melancholy would wash over me, forcing me to stop.

This was all getting a bit problematic for me, normally so prolific, so long-winded, so often chided by Ron (The Washbag Editor) for the ‘ridiculous’ lengths of my articles.

But then I suddenly remembered, I had the ultimate get out of jail card up my sleeve – I had already written the article. It was back in the post-season of 2012 and I penned a piece championing my nomination for the Washbag player of the season, which was of course was Wes.

So below is the original article, it’s a bit nostalgic – and out-of-date, but the arguments still remain strong. I have added some updates at the end to make it more ‘current’, but read on and make sure you have your hankies ready.

3rd May 1998, probably an insignificant date for many but in my opinion this was the last time I saw a top class goalkeeper (Fraser Digby) playing behind the Town defence. But before anyone starts up their whining, internal dialog of “what about Mildy, Evans or even Brez?” I’ll readily admit they all had their moments, Mildenhall for example was a fine goalkeeper, strong – and brave, the scars on his, ahem, ‘sacking’ is testament to that.

However, none of these could hold a candle to our present number one Wes Foderingham – if I had to sum him up using just one adjective then ‘quality’ would be it, he’s our player of the season and I urge you all to vote for him.

When we signed Wes, I seriously had doubts over his ability – like a true Swindon fan I had no evidence to support this except the fact that he hadn’t made a single appearance in the Football League. I missed his debut at Accrington and before his first home game I had already resigned myself to witnessing an inept performance by an inexperienced, timid goalie who would flap about hopelessly like an ostrich tossed off a cliff.

I couldn’t have been more wrong as instead I saw a powerful, confident and very vocal unit. Within minutes he was screaming at his backline and shoving Aden Flint away for some unseen defensive misdemeanour.

As elegant in the air as he is quick on the ground, his positional sense is central to what makes him such an excellent keeper. His distribution is immediate and accurate – and like a good adult film performer he manages to make himself big for those all important one-on-one situations. 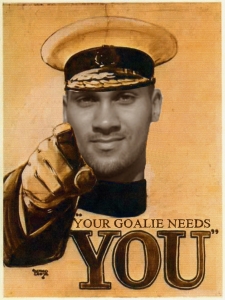 I could trot out a load of supportive statistics, but that would be too easy, I’ve got better points to make. However, I will mention one stat, mainly because I still find it hard to believe myself – Wes has only conceded 1 goal at home all season and created a new club record with 9 clean sheets in his most recent home games.

We’re often told that goals turn games, but this season, crucial saves have turned games – his amazing tip over from Huddersfield’s Lee Novak in the FA Cup, the penalty save against Wigan in the same competition – the fact that they scored the rebound is irrelevant, as that simply angered Town and galvanised their effort.

The penalty save from Cheltenham’s Darryl Duffy was crucial. With the game finely balanced his fantastic stop tipped the encounter in our favour – and I don’t mean just the destination of the 3 points, I mean the whole promotion run in. Swindon went from strength to strength, whereas Cheltenham’s decline began. So am I saying it was all due to that penalty save, well, yes I suppose I am.

Still not enough evidence? Then may I remind you of his astounding double save in the home fixture against Crawley. The clock showed 45 minutes, the players thoughts were already in the dressing room, contemplating relaxing rub downs and Bovril. Wes stayed totally alert to pull off two world class saves to keep us ahead.

I could go on all day throwing about endless Wes superlatives, but like all hackneyed court room dramas I’ll close my argument with a dramatic summing up.

When someone describes a goalie as ‘a good shot stopper’ it means they’re an adequate, nothing special keeper. Their job is to stop shots for goodness sake, it’s their bread and butter – if they can’t stop shots then they should give up. Also the phrase ‘good shot stopper’ tends to precede a qualifying buuuuut.

Ask a hundred people to sum Wes up and their initial reply would never be ‘good shot stopper’.

My second and final point is the clincher, how many reading this went to Gillingham? We had twenty minutes of pounding pressure, we laid siege to the Gills goal, one team in it etc.

It was so much like watching last season it hurt – and I’m not knocking Phil Smith (he’s a good shot stopper – oh, hang on) but that game illustrated exactly what we missed last season, a last line of defence.

This is what Wes brings to the table, a rock solid foundation for the team, strong, dependable and everyone, simply everyone has confidence in him.

So that was my Player of Year argument back in 2012 and since then I feel his abilities have flourished, his strengths have got stronger and his minimal weaknesses corrected. His ability at playing the sweeper role this year was a joy to behold, I cannot wait to see Ty adapt to the same position next season, hopefully we’ll see more of his now infamous Belford Chop. 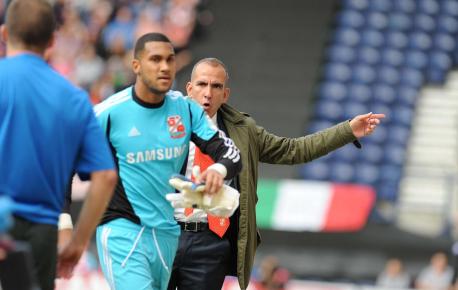 Wes had experienced the odd blip in his Swindon career – he certainly suffered a low when he was humiliated at Deepdale by Paolo Di Canio when substituted after 21 minutes – but personally I’ve never, ever seen him have a total stinker.

Remember his rick against Walsall, when the ball inexplicably squirmed through his hands and into the net? The gasp of shock was as loud as a hurricane, such was the surprise that Wes, our Wes had made such a routine cock-up. A cock-up that previous to his tenure would have happened ten times a season. A cock-up that happened ten times a game for his predecessor, Mattia Lanzano.

The look on my face was a picture, I would’ve been less surprised had the Queen dropped the C-bomb in her Christmas speech!

Anyway, despite my best efforts he didn’t win the Tortoise Shell Comb Award that year – it was carted off by the victorious Alan McCormack, but I feel I made a strong case.

However, Wes did make off with the prize for the 2013/14 season and deservedly so. But this now begs the obvious question, why has one of our most outstanding players of recent years never bagged the Blue Riband of player prizes – the Adver Player of the year?

He never won it, and I suppose this is what bugs me the most about his departure. Let me explain, out of all the scorelines I witnessed last year – the dreadful three nil home drubbings courtesy of Gillingham and Franchise, the disappointing defeat away at City and of course, the non-event at Wembley. Still, out of all those horror shows the most depressing scoreline of all will remain: