The best I’ve ever seen #8: Donkey heads a football…

I love a good ‘ball in the crowd’ moment, an awkward hoof by an uncompromising centre back, a shanked goal kick, a wild deflection – all these events lead to hilarity, a moment to treasure or a massive amount of pain. I savour these little vignettes, these unintentional moments of delicate interplay between player, ball and fan; in fact I like to think of myself as a connoisseur such events.

I myself have only once taken part in such an incident, it was pretty pathetic and didn’t really involve an ‘uncontrolled belt into the crowd’ situation:  I once nonchalantly batted a wayward, slowly bouncing ball back into the path of Paul Caddis so he could take a throw-in (away at Hereford) – I’ve been watching Swindon for over 30 years and that was it, just that one incident – and it was rubbish.

I did, however, catch one of those freebie ‘plastic fantastics’ booted into the crowd by players prior to kick-off back in the late eighties/early nineties. I still have it, here it is: 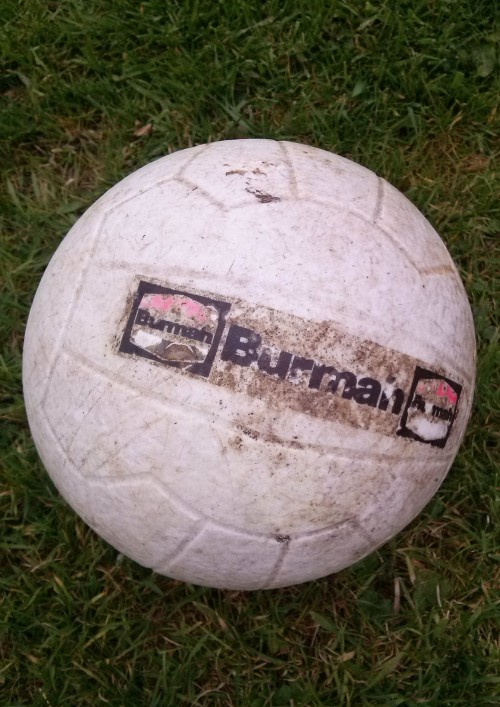 A few opportunities have literally sailed over my head, or agonisingly dropped short, it seems I just haven’t been in the right place at the right time. Sometimes though, it appears that this is not always a good place to be. I’ve seen people take fizzers straight to the face, knocking them sideways. I remember an awful, glasses-shattering incident away at Wycombe, when a stray Andy Gurney pile-driver caught some poor bespectacled geezer flush in the face, sending shards of lens, plastic, skin and eyeball to all corners.

Recently I saw Andy Williams take a chunk out of an unsuspecting Town Ender in a pre-match warm-up, with a sense of care he waded into the crowd to revive and presumably fish out the tongue of his nailed victim.

Back in the day, I distinctly remember an incident during the rather muscular Macari era, when a hundred-mile-an-hour ricochet smacked into an advertising hoarding before deflecting at an impossible angle to take out a patrolling copper. Man, the guy went down – gracefully pirouetting before crashing face first into the dirt and was left motionless. All this was choreographed to a soundtrack of wild cheers and celebrations from the caged inmates in the Town End.

I’ve always dreamt of getting on the receiving end of one of these wild hoofs, to rise from my seat to head the ball back gloriously to the waiting player. However, the chances of this ever happening seems to be diminishing, as I’m sure the ball doesn’t go into the crowd as often as it did when I was younger, ever since Alan Reeves retired I reckon the percentage chance has dropped off by about 75%.

But back in November 2013, someone lived that dream. An aimless high arcing ball found its way into the upper echelons of the DRS and was met so sweetly by a fan, drawing gasps and nods of approval from fans and players alike. That man was the poster known as Donkey from the Town End forum, he was sat possibly two rows in front and about twenty or so seats to my right.

There was none of this hopeless stretching nonsense, with the ball painfully clipping an ear or smashing into the bridge of the nose, he rose like an invigorated salmon and met it perfectly. An immaculate union between polyurethane and epidermis, the resulting ‘thump’ was deeply satisfying, Jon Gittens, Shaun Taylor et al would’ve been proud. What made it doubly impressive was the fact that he wore glasses and that they remained intact.

Everyone cheered, everyone was secretly jealous, everyone realised that if it had been them they probably would’ve totally cocked it up. Donkey accepted the generous adulation and sat back down, a great moment had been recorded in the annals of equine history and a bucket list item has been ticked off.

So after seeing umpteen hilarious, sometimes upsetting, but more often than not, totally rubbish attempts at crowd headers, I had finally witnessed the best I’d ever seen…. And oh how I wished it had been me!

Want to nominate an entry into our ‘Best I’ve Ever Seen’ feature?