Emotional rollercoaster? So much more than that…

It’s Friday, so it must be time for the latest weekly review by BBC Devon’s Vic Morgan

If you’ve ever seen a better game of football than last Monday night then please send me a recording.

There are hundreds of words that could describe the contest with Sheffield United. Gripping, dramatic, exciting even amazing. Put them all together and they still don’t do it justice.

First off, it was a lovely day. Perfect for play off football. There was the usual pre-match discussion in the car park at the County Ground about our chances. There was also a fair amount of pre match nerves so goodness knows how the players felt.

So the whistle blows and maybe it’ll be a cagy affair. Maybe both teams will keep it tight trying to avoid any mistakes. Well obviously that might be the plan but sometimes the best laid ones go out of the window. 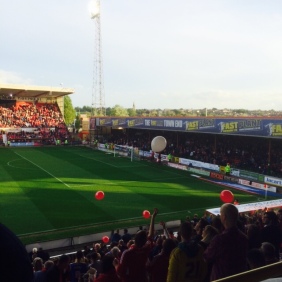 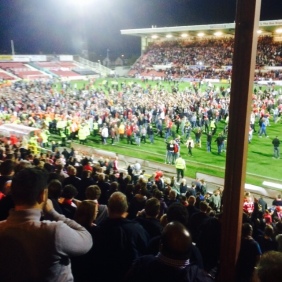 Like in the third minute. Ben Gladwin’s screamer set the tone. A second followed moments later from the same player and, like a London bus, another from Michael Smith brought to an end an incredible first 17 minutes.

It was hard to believe what we were seeing. It was quite simply as good as it gets. Surely then, plain sailing from now on. Job done, Wembley here we come!

Well yet again those best laid plans were put on the back burner for a while. Credit the Blades for their persistence. Back to 3-2 at the break and no sitting back in our seats and smoking the figurative cigar.

More swaying back and forth in the second half and amazingly we went into what seemed an interminable injury and stoppage time tied at five all, yes five all. Then it was all over. Quite frankly it was the football game that sets the standard for the future. A ‘no holds barred’ contest full of everything that’s good about the sport we love.

So we are at Wembley.

It’ll be the sixth time I’ve seen the Town at the national stadium. The first three were all great, the second two dismal. The new stadium has yet to see us score in it. Previously the old venue was a more than happy hunting ground.

How’s it going to go? No idea. Preston have a formidable strike force. We have a brave young team that doesn’t appear to suffer from nerves. Enjoy the weekend off and for the first time in a little while, prepare for Wembley!