Swindon approached the game looking to avoid a run of three consecutive away defeats for the first time under Mark Cooper’s management. A trip to Scunthorpe United who were 18th in the table and without a home win in 2015, looked like a decent opportunity to stop the rot.

Nathan Thompson was recalled to the defence after missing two games through injury. He took the place of Jack Stephens, who was nudged forward to replace the injured Massimo Luongo in midfield. Nathan Byrne was also fit again, and replaced Ben Gladwin at right wing back. Up front, Andy Williams was recalled in place of Jon Obika.

Town’s start to the game was unconvincing, with a few misplaced passes drifting around the Swindon half in the opening minutes. Most notably, Wes Foderingham hammered a bizarre low clearance at Nathan Thompson, who did well to prevent it from ricocheting off him and putting an opponent through on goal.

Fortunately, Scunthorpe failed to capitalise on any of their early half-chances, and Swindon began to get a grip on the game. First, after 9 minutes, Byrne played Williams in on goal with an excellent through ball, but the striker dragged a poor shot well wide. Moments later, Michael Smith broke down the right and fired a dangerous low ball across the face of goal, inches in front of the approaching Harry Toffolo, who couldn’t quite reach it to apply a tap-in.

Although Scunthorpe would have been disappointed not to test Foderingham with a couple of far post headers, Town continued to have the upper hand. Having found space down the Scunthorpe left and broken into the area, Williams ran into a defender rather than playing a simple square ball inside for the unmarked Smith. Jack Stephens then fizzed a shot narrowly wide. A further opportunity to run at the Scunthorpe defence soon followed for Williams, but sadly he preferred to take a cringeworthy dive, for which he was inevitably booked.

Town finally put right their failure to seriously test the Scunthorpe keeper in the 43rd minute. Louis Thompson played in Toffolo down the left, who laid a simple ball inside to Smith. He cut inside a defender and, from 20-yards, curled in a beautiful strike, which crept inside the far post to give Town a lead which, on balance, was deserved.

The lead should have been doubled before half-time. Once again, Scunthorpe failed to cope with Smith’s persistent running down the right flank, and he delivered another dangerous low ball into the middle. A simple knock either side of the keeper would have doubled Town’s lead, but Williams put his shot straight at him, and the chance had gone.

Unfortunately, the second half, like the first, started slowly, with Swindon struggling to make an impression. First, Foderingham and Jordan Turnbull left a simple long ball for each other, allowing Scunthorpe’s Paddy Madden a clear run on goal. In fairness, Foderingham did well to show him wide, before parrying his eventual shot. Scunthorpe continued to crank up the pressure, and hit the bar through Neil Bishop’s header, but Town failed to heed the warnings, and conceded moments later. A long throw in was flicked towards the far post, where Madden was left unmarked and with a simple chance to knock the ball in.

At 1-1, Town had a couple more chances to get back in front. Yaser Kasim hit a decent strike direct from a free kick, which the keeper could only hold at the second attempt. Shortly afterwards, Williams, whose extreme first-half wastefulness was now beginning to be felt, did manage to curl a decent 18-yard effort goalwards, but, with the keeper beaten, it rebounded off the bar.

A key moment for Town came when Raphael Rossi Branco, who had already been booked, committed a further foul on the halfway line, which resulted in a scuffle. The referee called Nathan Thompson across to join his conversation with Branco, presumably to make it clear that the culprit was on extremely thin ice.

Cooper’s decision to replace Branco with Ben Gladwin, and push Stephens back into defence, was therefore understandable, but within minutes Town’s loss of their main aerial presence had cost them dear. First, a Scunthorpe corner was headed in off the post by defender Niall Canavan, after he had managed to break free from Gladwin. Once again, our set piece defending had let us down. Just 3 minutes later, having already conceded from a corner and a throw-in, Town seemed determined to complete the set, and managed to lose a third within around 8 seconds of a Scunthorpe goal kick. This goal was the worst of the lot, and Nathan Thompson’s clumsy loss of possession, under very little pressure, allowed opponent Kevin van Veen through on goal to chip Foderingham with ease.

To typify the day, Swindon managed to fail to convert any of several glaring stoppage time chances, but the damage was already done, and we fell to our heaviest league defeat since last April. 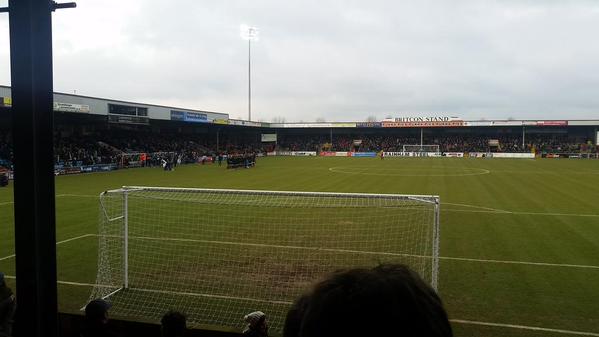 @jightymoe – Got to love a pillar #stfc @thewashbag

Here are some thoughts:

Having lost three of our last four games, it’s fair to say that, considering that we were previously averaging over two points per game, we are currently on a poor run. It isn’t worth falling into a state of blind panic. But it is worth assessing what’s going wrong, and considering why a team which was previously winning nearly all of its away games has suddenly started losing them.

I haven’t heard a single fan suggest that Town should abandon our passing style, and resort to long ball tactics. Everyone appreciates that we are a team with technical attributes rather than physical ones, and that our style must reflect this. But that doesn’t mean that a team which is struggling, and continuing to lose sloppy and avoidable goals, should be too stubborn to tweak things with a view to getting results back on track.

Michael Smith was my man of the match yesterday. That’s predominantly because he scored one goal, and set up our two best chances of the match for teammates. None of these opportunities came about through fluid passing moves, but neither did any result from a long boot forward. All arose from his direct runs and low, firmly-struck crosses and shots. On the day, Scunthorpe struggled to cope with these, but their deep-lying defence dealt comfortably with our more patient attacking moves. Of course, as much flexibility as possible between different styles of play would help our chances of getting things back on track.

For the second time this week, Town conceded twice in very quick succession. In fact, we’ve now managed to concede two goals inside 10 minutes of each other a total of 8 times this season. This is an unimpressive stat, which needs to improve. The second of the quickfire pair has been easily avoidable, both on Tuesday and Saturday, and it looks as if a lack of concentration shortly after conceding may well be to blame.

We now have healthier numbers of players to choose from, meaning that, inevitably, plenty of options will continue to be available to Cooper.

On form, I would have no arguments if Nathan Thompson were to be left out of the back three. He has made too many glaring errors for my liking, and looks to be low on confidence. Alternatively, perhaps he could be used on occasions at wing back, where options remain very limited, and there’s pressure on both Toffolo and Byrne to play in a physically demanding position for 90 minutes just about every time we play.

Next up is a match at home to Crawley, who have lost their last six away games, and have won only twice in total since mid-October. Here’s hoping for a win, to prove that romance around the County Ground isn’t dead.