Enjoyable being sent to Coventry, isn’t it..?

It’s Friday, so it must be time for the latest weekly review by BBC Devon’s Vic Morgan.

Worth waiting for wasn’t it? Having no Swindon game last Saturday was a bit disappointing, but boy it had a happy ending.

The rescheduled fixture at the Ricoh Area brought one of the Town’s most memorable performances in what is already a memorable season.

Because of TV the game was moved to Monday meaning Swindon had to win by two clear goals to go back to the top of the table after Bristol City’s victory over Notts County. Well that was achieved comfortably…

It was one of the most accomplished first forty five minutes I’ve seen from a Town team in a long time. Never has the expression chasing shadows been more appropriate. Quite simply Coventry couldn’t get near the ball.

In a vast stadium that looked almost empty with a seven thousand crowd, the traveling red army were in full voice as Andy Williams hit the two goals that emphasised Swindon’s dominance. 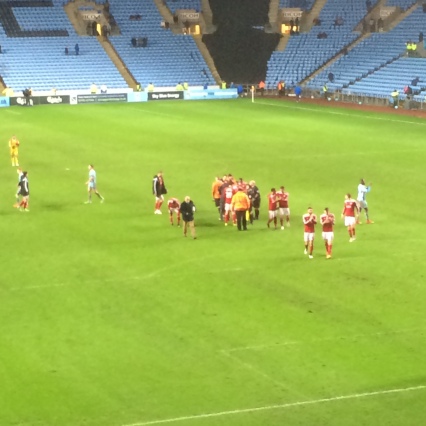 Although being hyper critical the half time lead should have been greater. Still not to worry. It was a wonderful display and talking to people in Devon who’d watched the game on television, they were more than impressed.

The collective feet were taken off the pedal slightly in the second half but it was a great display. It was full of creativity and the performance of the Thompson brothers summed it up. Desire, talent and a downright determination to win. Fabulous.

The performances of Yasser Kasim and Massimo Luongo in the Asian Cup have attracted rave reviews. It can’t hinder the club as owner Lee Power looks for extra investment. The better the press the better the image.

That brings me to the current dispute between club and local newspaper.

It appears that the Swindon Advertiser is not welcome at certain news gatherings. I don’t know the reasons behind this enough to say who’s right or wrong.

What I do know is that at a time when the ability to express views is being talked about in all forms of media, this can’t be a healthy situation.

The Adver has been part of Swindon life for well over a century, just like the football club. It is to the benefit of everyone surely that whatever the dispute is, it’s cleared up quickly.

I’ve been threatened with being banned from the County Ground in the past when things I reported weren’t liked by the powers that be. It’s not pleasant.

However it is the job of reporters to report. As long as it’s responsibly done then it can be to the benefit of everyone. At a time when things are so good on the pitch, it would be brilliant if that were the case off it as well.

On the pitch it’s Chesterfield on Saturday. A home game at last. Let’s hope the visitors come to play football. Another super display brought three points for the Town in the game between the two sides earlier this season. Here’s to the same at the weekend.