It’s Friday, so it must be time for the latest weekly review by BBC Devon’s Vic Morgan.

Back to normal this weekend thank goodness.

It’s always odd when there’s no Swindon game on a Saturday during the season. Although to be honest we’re used to it on FA Cup second round weekend. What to do when that happens?

Well I suppose there’s a variety of activities available, especially pre Christmas. An opportunity to get all the shopping done and dusted ahead of the big day? Actually I spent the afternoon watching guess what? Yes football.

It’s always fun to go to other games and realise that fans of other clubs have the same sometimes miserable, sometimes happy, times as we do. Exeter versus Burton may not be everybody’s idea of fun but football is football and somehow it’s difficult not to find a game even if the Town aren’t playing.

Then a nice stroll through the city centre put me in a festive mood. Still didn’t get the shopping done though. One interesting anomaly came out of the game. The first half lasted 44’58”, no stoppage time, straight off. Mind you the second half had six minutes of added time, so the referee clearly made up for it. 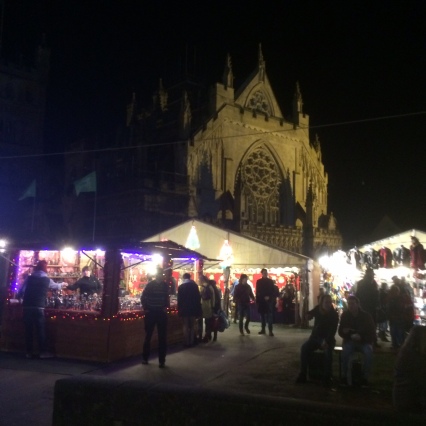 With the festive fixtures in mind it’ll be interesting to see what kind of shape Swindon will be in come early January. Lots of games in a short space of time and hopes raised or dashed.

I guess those games kick off at Meadow Lane this Saturday. Somehow it’s always an eventful fixture. It can be the coldest of places especially in mid winter. The wind whips off the nearby River Trent and can lead to an uncomfortable afternoon. Really looking forward to it though, it’s a return to the norm watching our team play.

There’s plenty of room for optimism at the moment. We’re seeing exciting football played by a young hungry team. If things go the way we want that’ll be fantastic.

Certainly the Town’s efforts have been recognised with a manager of the month award. Fine reward for Mark Cooper and his staff. It’s fair to say there was scepticism when the initial appointment was made. Now though, the manager has proved a lot of doubters wrong and the progress is there for all to see.

Time to wrap up warm for the trip to the East Midlands and hope for three pre Christmas points.