East to West then Thompson signs up

It’s Friday, there’s no game tomorrow, so it must be time for the latest STFC weekly review by BBC Devon’s Vic Morgan.

As I write this I’m just digesting the news that Nathan Thompson is signing a contract extension at the County Ground. While I’m not naive enough to think that at some point our captain might move on, it’s a pointer to how things are going at our club.

Nathan has a bit of the John Trollope about him. Swindon is his club and he wants it to succeed. It’s good to see that even in 2014, being with one team for more than five minutes isn’t a thing of the past. We’re also hearing that Swindon Town FC is breaking even. That is possibly one of the best pieces of news we’ve had in a long time. Allied to the fact that the side is playing sublime football, it makes for a great autumn.

On the pitch a mixed week. To the Orient first and another superb away display. Goals from the impressive Michael Smith and Nathan Byrne cemented the points which lifted us to second in League One.

It was watched by a large and vociferous Town support, which had endured a tortuous journey to east London. Traffic congestion on a rainy Saturday in the capitol meant a nervous hour or two before kick off. It also meant something I hate. Arriving at the ground with moments to go ahead of the start. You see I can’t really get into a game without having some time to soak in the surroundings. I know it’s just me. Hope it doesn’t happen too often this season. Anyhoo, great match, great support, great result. 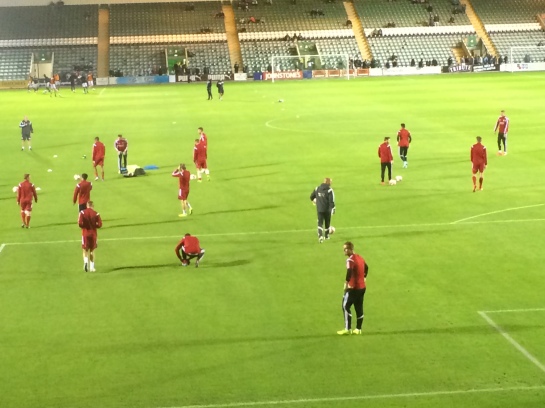 No such travel problems for the JPT tie at Plymouth. Working in the Devon city, it was a case of a quick ten minute trip to Home Park for me. At half time I was wondering why I hadn’t stayed at work. Three goals down and looking unlikely to find a way back. It wasn’t good. Second half was better, although I had to leave before the end to present my late night radio programme. So I missed Ben Gladwin’s goal and the Luke McCormick save to prevent the game going to penalties. Needless to say I received my share of texts into the programme from Argyle fans following their win.

It’s another visit to Exeter City for me on Saturday, as once again international call ups mean no Swindon game. Is it just me or do you find this frustrating. I want to see MY team play at the moment. Got a feeling we’re in for more blank weekends.