Leyton Orient 1-2 Swindon Town: To wax or to net three points, that was the question

When Swindon Town have shown up at Brisbane Road, now known as the Matchroom Stadium but still actually on Brisbane Road E10, on the past four occasions, we have left again with nothing.  It doesn’t take much to keep fans away on that basis, but on Saturday, as the rain drove nearly 1,200 Town fans eastwards, eventually the sun came out and Mark Cooper’s boys sealed a third successive win on the road in the league this season. Writes Anna Tuersley.

Mixed opinions on Cooper are still apparent in the stands, ranging from those who won’t sing his name, to those who argue that he could prove to be one of our most successful managers.  Whatever you think, the quality of some of the football played by his Swindon team on this and other days  has at times been of the highest, led by the tight-knit partnerships in midfield of Yaser Kasim, Louis Thompson and Massimo Luongo with Nathan Byrne providing more than able support on the right, up front Michael Smith working his socks off and with much better control than last season.  Most significantly, now is a time when we have a Town side that frightens opponents with the pace of its attack and on Saturday, again, this ability to break out of defence quickly was key.

Unsurprisingly, the starting line-up saw no change from that which finished against Barnsley a week previously, with Andy Williams carrying on in attack in place of the injured Jonathan Obika.  Brad Smith was again on the bench in favour of Amari’i Bell, the central defensive three of Nathan Thompson, Turnbull and Stephens permitted to continue building their working relationship.  Orient’s lineup featured two ex Town players, Scott Cuthbert, who received a typical Wiltshire reception and from the bench, Darius Henderson.

Records were there to be broken – Town’s abysmal tally of no wins on Orient soil since 2009/10 and not having beaten them on any account in eight attempts and then the home side’s of no home victory so far this season, supported by an equally alarming record of just three goals. Something had to give.

Town these days are made of stern stuff and their ability to soak up pressure, bring the ball out, then scoot upfield at break-neck speed and turn chances into goals, is something which opponents are struggling to live with.  As the game was still settling into a pattern, Byrne could have done better with a pull-back which Woods in the Orient goal was able to smother.  Orient had two early half-chances both courtesy of referee’s assistant, Amy Fearn, who having the proverbial nightmare, first failed to flag two offside blatant offsides, then perversely gave offside when the ‘throughball’ to Jay Simpson came from white-shirted Michael Smith. Cue round-the-ref protestations from O’s players and choruses of ‘you don’t know what you’re doing’ from both sets of fans which was an improvement on the earlier chant of ‘stayed in the kitchen, you should have stayed in the kitchen’. Football fans can be cruel.

But then it happened.  Just before the half hour mark, Town got forward at speed, Luongo found Smith in the box and Smith, with the aid of a slight deflection, hit the ball past Woods in the home goal for 1-0.  Great move, great finish. 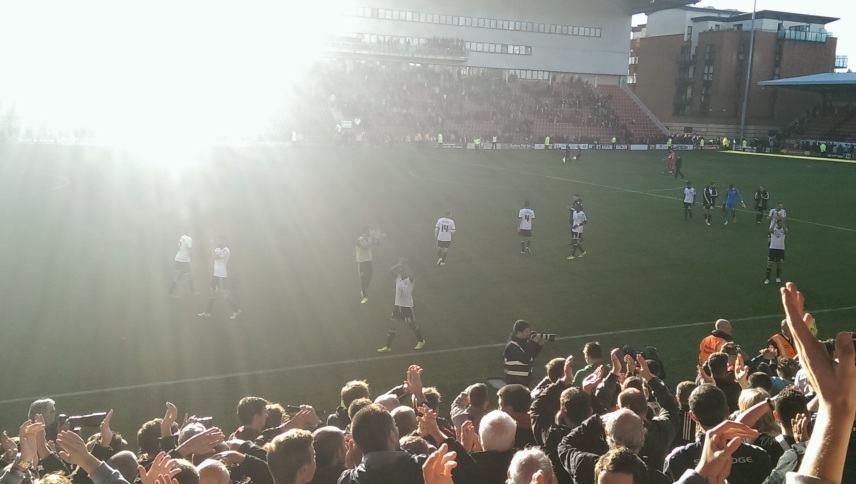 If Orient were wobbling then, one eye yearningly on a first home win of the season, they were positively rocking after two minutes of the second forty-five.  Embedded deep in their own half, Town broke swiftly, first Foderingham’s deft throw found Luongo upfield, Luongo surged over the half-way line found Smith wide on the right, Smith’s ball picked out Byrne darting between defenders in the area and he finished superbly high into the net to double Town’s lead. You have to wonder how many superlatives are allowed to describe that kind of goal.

That second strike could have killed the game and for the most part it did.  Town ran the midfield, Byrne was ever dangerous, Louis Thompson came more to the fore as the game wore on and in defence Turnbull was a giant, heading out from under the bar at one point. But to their credit, Orient kept pressing and though lacking real quality, created a few hair-raising moments in the Town penalty area.  As the half wore on, Town tired, the withdrawal of Andy Williams in favour of Jake Reeves only served to push them deeper into their own half, it’s a shame that Williams performs better as an impact sub, but that’s the truth based on this display.  There were other chances to put the game further beyond the reach of the home side, notably Bell’s break down the left and final shot arrested by a Wood save.

Instead the introduction of former Town loanee Darius Henderson was making Town’s defence increasingly less sure as the game entered its final quarter hour and thanks to a couple of flares and a fracas after a foul on Byrne during which both Kasim and Foderingham (who raced 50 yards to join in) as well as Henderson and Cox of Orient, were booked,  play entered six minutes of stoppage time.  It was Henderson of course who was there to force home after Town failed to clear their lines from a Cuthbert cross leaving 90 seconds of sweaty palms through two more attacks, finally though Town held on for another away three pointer and a move to second place in the table.

On the way home along Leyton High Road, it was tempting to take up an offer of a ‘full body wax’, but instead we took the option of a tube ride to West London and a drive in the setting sun back down the M4 with those points safe in our pockets.