Mike Minihane continues his look back 50 years to events at the County Ground. Following Swindon Town’s first season in the ‘big time’ Division Two during 1963/64, Town looked to consolidate; however football isn’t that simple…

Top of the Charts:  You Really Got Me – The Kinks

September was going to be a very busy month with seven league games scheduled as well as a League Cup tie at Swansea Town. First up was a trip to Crystal Palace who we had beaten quite easily 2-0 only a week before. It turned out to be an easy win for Palace who strolled home 3-1 with Mike Summerbee getting our consolation goal. The following Saturday another London trip to Palace’s neighbours Charlton Athletic was to prove equally unrewarding as despite taking the lead through Bill Atkins a very late goal gave Charlton a 3-2 win. This was to be the shape of things to come away from home as we continued to ship goals at an alarming rate.

Mercifully things were going better at home and the following Tuesday brought a very welcome 3-0 win over Swansea Town with two goals from Bill Atkins and one from Ernie Hunt. The contrast between home form and away form was marked, with three wins and three clean sheets at home compared to three defeats and twelve goals conceded on our travels.

The following Saturday brought a highly anticipated visit from Manchester City; the memories of our superb performance the previous season were still fresh. This time however it was to be very different as despite playing well a goal from the predatory and prolific Derek Kevan gave City the points. I can still remember him being put through one on one with Tony Hicks at the Stratton Bank End. The outcome was inevitable, he made it look so easy.

For some unknown reason the fixtures in this era often produced two games against the same opposition in consecutive weeks. Having just played Palace twice in eight days the same situation arose with Swansea Town who took full revenge for their 0-3 loss the previous week with a 4-0 demolition job at the Vetch Field. Four days later things went from bad to worse as we slumped to a dismal 0-5 defeat at Portsmouth.

Our draw in the First Round of the League Cup had given us Swansea away, the third meeting between the clubs in two weeks. Unfortunately we hadn’t learnt anything from our 0-4 hammering the previous week and our hopes of progressing in the competition went out of the window with a 1-3 defeat, Ken Skeen getting our goal. We had now lost six away games in a row, conceding twenty-four goals. It was pretty obvious that the defence needed shoring up but there was no money for signings and Bert Head clearly had no idea as to how to stop the rot, in one interview he maintained that the problem was that we weren’t kicking the ball hard enough away from home. Even to me this sounded clueless. We needed a gritty 0-0 away draw to start to restore some belief but it would be almost Christmas before we got anything from an away game.

The month did at least end positively with an emphatic 4-1 home win against bottom placed Huddersfield Town, courtesy of goals from Summerbee, Hunt, Smart and Rogers. At home we were Doctor Jekyll, we could play well and win, but away from home we were Edward Hyde, a complete contrast. Our split personality form would keep us above the relegation zone but if Doctor Jekyll got the shakes we were going to be in the mire. 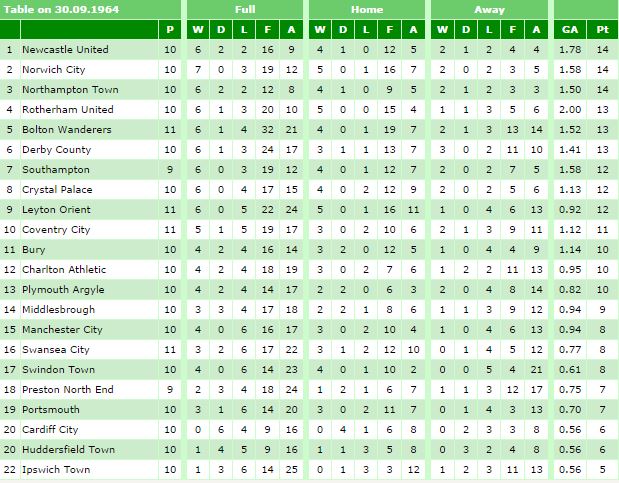 Table and results from Statto.com