Been a decent week I think. Can’t complain at the last few days in the life of our favourite football team. Certainly last Saturday against Sheffield United was almost as good as it gets. Swindon’s play was majestic at times. The only grouse is that five goals weren’t enough and the Town went to sleep for ten second-half minutes. Apart from that, it was a pleasure to be at the County Ground. Just like seven days previously at Bradford, you had to admire the sheer joy this young team seems to have in playing the game.

There are no passengers at the moment, everyone wants to play a part. Again though the size of the crowd is a worry. I can’t blame people for not wanting to pay what are very high prices for division three football. So the club has to seriously look at how to get back the stay aways. Going to a game is a habit. The problem is that if you break that habit, then it’s difficult to get it back. What is clear, is that this team deserves bigger crowds. I hope someway can be found to get the absentees through the turnstiles again.

It was across the bridge to Wales on Tuesday and our first visit to Newport County for thirty years. Previously we’d played at the old Somerton Park ground, which doubled as the home for the Newport Wasps speedway team. Now County play at a ground which also hosts Newport’s rugby team. I must say I rather liked Rodney Parade. The ground was neat and the view was uninterrupted. 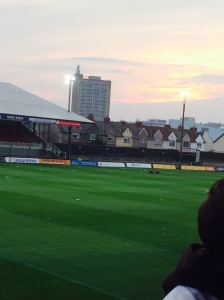 As for the football? It was a decent enough game for the JPT. Jon Obika kept up his great start with another goal and Andy Williams added another to his growing tally. Being Swindon, of course there was a nervous last few minutes as Newport reduced the arrears. Still, a game at Plymouth in the next round. Thank goodness for that just a short trip for me from Exeter. He said selfishly. Not so Saturday. Up with the very early lark for the journey to Barnsley. Looking forward to it. How can you not enjoy watching the Town right now?