Jay McEveley: Only missing a goal…

When Paolo Di Canio finally left the County Ground Brendan Hobbs penned a personal eulogy to the departing managerial enigma, and he to be fair was bit of a berk. So we think it’s only fair that Brendan should do one about another passionate individual, one who like Di Canio was equally driven to win at all costs, but this one seemed a real decent guy.

I received confirmation about James McEveley’s departure during the post-match radio ramble as I drove away from the County Ground on Saturday – I guessed something might have been up when he appeared shirtless and waving on the pitch moments before. But like a spurned lover still awaiting a return text from a cheating partner, I chose to totally ignore the reality. As I moseyed down the DRS steps at full time I overhead someone say, “Look, Jay’s obviously off”,  I turned and laughed manically, trying to force my hope that this was in fact a cruel joke. Alas, no-one joined in, so I shoved my fingers in my ears and tra-la-laared my way down the steps thinking why would people joke about such things?

When I got home I had to accept the reality, I sat in my car on the drive listening to Jay’s post-match interview. I couldn’t finish it; it was like hearing a break up speech from a special girlfriend, so mid scouse sentence I turned off the ignition and walked away, personal effects and slushy mix-tape in hand. My mind was a maelstrom of confused thoughts, of wasted opportunities – I hadn’t got around to producing a Washbag shop Tee for the guy, I hadn’t even used him as a subject of one of my puerile photoshopped posters.

Jay McEveley was one of Di Canio’s shrewdest signings; he arrived late in the 11/12 season, initially on loan from Barnsley. His Town career didn’t have the greatest of starts even though it did happen in the grandest of settings – Wembley Stadium. Yes, Jay was catapulted straight into the starting eleven for house paint’s showpiece occasion, the Johnstone Paint Trophy final. Understandably Jay didn’t deliver his most convincing performance in a red shirt.

McEveley had pedigree though, with over 50 Premier League games behind him and goals against Arsenal and Liverpool under his belt, I knew he would shine.  He was also one of a select group of international players who have turned out on both sides of the border (three full caps for Scotland, one cap for England U-21’s.)

If Jay was an accomplished left-back in real life, he was also an absolute legend in early versions of Championship Manager, one that you always tried to sign as soon as the game started. Dozens of forum threads and articles dedicated to his computer simulated brilliance can still be found littering the interweb to this day, here are just two examples:

In his debut season with Swindon he managed nine appearances and quite rightly joined in with the championship celebrations, a bit too early though for PDC as Jay was one of famous five disciplined and dropped for premature partying.  At the end of the season Barnsley decided not to renew his contract, so Town quickly snaffled him up on a free.

Despite suffering numerous knee injuries Jay went on to make 79 appearances in total for Swindon, mostly at left back but he sometimes dabbled (successfully) as a central defender. He also recently shone whilst playing in the middle of the park, showing his adaptation and commitment.

Jay always played at full tilt and was a born winner. His command of the left-back craft was always a joy to behold, he was rarely skinned by an attacking winger, often using his good positional sense to nullify raids rather than resorting to last ditch tackles. But when he was called upon to make a tackle he was always committed and full-blooded – he simply had to win the ball – and was visibly angry if he failed to do so or gave away a free kick.

He was equally as dedicated when rampaging forward, or bollocking Raphael Rossi Branco for being out of position, or bollocking himself for a shanked cross – his will to win was constantly apparent. If we conceded, he’d react like he’d been knifed in the heart, if it had come from the left side of the pitch (it rarely did) he’d be apoplectic with rage.

The one thing his Swindon career was missing was a goal, and it so nearly came in his last appearance. A crashing drive from a well-worked corner routine nearly smashed the cross bar into County Road, the reverb noise caused ears to bleed in Blunsdon, fans had heads in hands and I let a bit of wee escape. Mark Cooper admitted in the post-match conference that Jay had instigated the routine, so close yet so far.

When I had finally composed myself at home, like most men I decided to mask my feelings behind a façade of humour, so I tweeted:

I felt much better, but unfortunately Jay then ‘favourited’ the tweet so my wife was left with the unenviable task of explaining to our two boys why Daddy was crying….

So Jay, you finally get a mocked up poster, I used George Millers apocalyptic masterpiece Mad Max 2 as the template purely because the final line of the film is “He lives now… only in our memories” and this sadly is now is true. 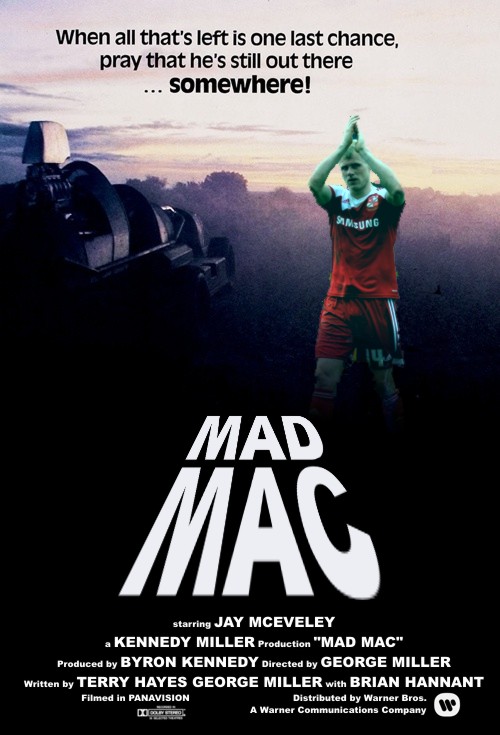