8th placed Swindon Town remain five points off the play-offs following an unlikely 3-1 victory over Shrewsbury Town and a midweek comeback to draw 1-1 at Walsall.

In the League One form guide, Swindon are 14th with two wins, two draws and two defeats in six.

At the County Ground, Swindon are 2nd in the form guide with five wins and one defeat in six games. Town have won their previous four games as hosts, however they’ve conceded once in each of those games.

Swindon have not failed to score as hosts this season in League One. An average of 2.38 goals scored per game by Town ensures they are ranked as the division’s entertainers.

16th placed Oldham Ahtletic travel to the County Ground after losing in midweek 3-0 to Wolves. Oldham are 19th in the League One form guide with two wins and four defeats.

On their travels, Oldham are without a win in their previous five games, having won once, drawn two and lost three, placing them 17th in the form guide. The Lactics haven’t scored in their previous two away games – which were 1-0 defeats.

In all League, FA Cup and Football League competitions, Town have faced Oldham Athletic on 48 occasions, winning 18, drawing 12 and defeated 18; scoring 74 and conceding 68.

Oldham won the meeting earlier this season 2-1 at Boundary Park.

Town’s last win as hosts was a 4-2 win in February 2010 with goals from Billy Paynter, Charlie Austin and Danny Ward. 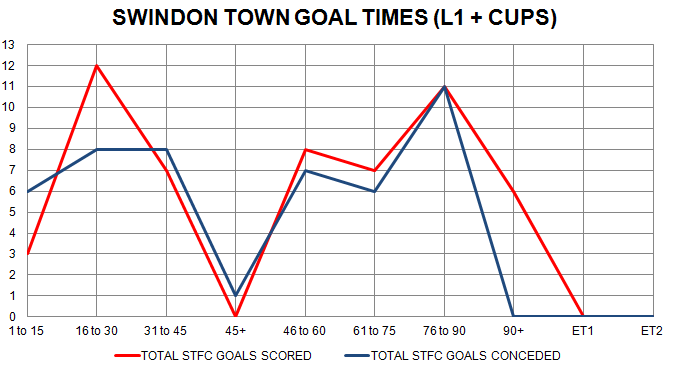 If there’s one thing that’s for certain it’s that Swindon Town will typically score at least two goals as hosts per game. We’ll also, on the form of the previous four games at the County Ground, concede once…so the score will be…