Throughout this season Mike Minihane will be taking a look back at Swindon Town’s first season in the ‘big time’, following the promotion to Division Two for the 1963/64 season. Mike continues with a review of January 1964…

Top of the Charts – Glad All Over – The Dave Clark Five

Morale was hardly high as we entered the New Year in 1964. A dire December had seen Bert Head’s Swindon Town take a mere three points out of a possible ten and we’d slipped down to fifth in the League. However, as a Second Division club there was a novelty awaiting us. For the first time we entered the FA Cup in Round 3 with the big boys.

We’d been dawn home to Manchester City who had improved considerably since our 3-0 demolition job on them back in September and were now just one place below us. This was going to be a tough game. There was a great cup atmosphere and over 18,000 in the County Ground. Swindon got off to the best possible start with a fifth minute goal from Roger Smart who was always one of my favourite players – unspectacular but always hard-working and reliable; I can’t remember ever seeing him have a bad game. The game was well-contested and City, as expected, came back at us with a vengeance. It was no surprise when in the second half they scored a well-deserved equaliser from Alan Oakes. A draw looked odds on and none of us fancied our chances in a replay. However a second goal, again from the industrious Roger Smart, put our noses in front and we held on for the 2-1 victory and a place in the 4th Round draw. All of a sudden, morale was lifted, even when we drew Fourth Division Aldershot away.

A week later, after the Lord Mayor’s Show of the FA Cup, we had the thrill of a league trip to Rotherham United, a bit of a contrast. We’d lost the four previous away games so a point would be more than welcome and a gritty performance saw us get one in a 0-0 draw. A good result in the circumstances but since the City game our eyes had been firmly on the following Saturday’s fixture, the first ever visit of Leeds United. Leeds were top of the league and looking as though they meant business in their quest for promotion. This was in the early days of the Revie era that was to see Leeds dominate English football for the next ten years.  In fact only a win in the final game of the 1961/62 season had saved them from relegation to Division Three.  The nucleus of the side that was to enjoy such success was in their side that day…Paul Reaney, Paul Madeley, Norman Hunter, Johnny Giles, Bobby Collins and the inimitable Billy Bremner. This was going to be some game!

I have two memories of this game that stand out beyond all others. The first was captured by Adver photographer David Evans. It’s a photo of Bill Atkins’ bullet header rocketing into the top corner as the diminutive Bremner jumps desperately on the line in a vain attempt to keep it out. The second also involves Bremner, a combatative player to put it politely. Mike Summerbee beat Bremner with ease and way after he’d gone past him Bremner brought him down from behind in what today would be termed a ‘cynical challenge’. Buzzer picked himself up, strode back to the prostrate Bremner and made to stamp on his face, stopping his foot about half an inch before making contact. Bremner looked terrified; he didn’t commit a bad foul for the rest of the game. The facts of the game are that Bill Atkins gave us a dream start with two headed goals at the Town End in the first 15 minutes.

After that Leeds came back at us and shortly before half-time Johnny Giles headed home at the Stratton Bank end to put them back in the game. The second half was pulsating as Leeds came at us and we strove to hang onto our slender lead. It looked as if we’d do it too, but it wasn’t to be. In the final minutes Norman Hunter of all people forced home an equaliser at the Town End to give Leeds a point which to be fair they probably deserved, but our disappointment at conceding so late was huge. Some Town fans missed the late goal because a limited number of tickets for the 4th Round FA Cup tie at Aldershot were to go on sale at the end of the game. I was lucky because a mate of mine got one for me, although at the time I think I wished I hadn’t had to see Hunter’s goal going in. We’d seen a truly great game though, played with passion and commitment in front of over 19000 fans. We certainly had been given our money’s worth! 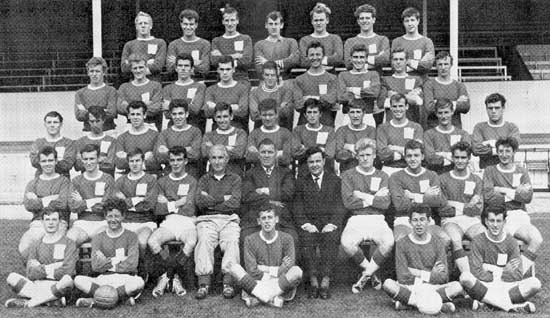 I once got a round of applause in a packed pub for correctly answering a question in the final of a pub quiz; no one else there knew the answer. What is the relevance of this you may be wondering? The question was ‘Which Football League club play on a public park?’  The answer of course is Aldershot, and had I not been to the aptly named Recreation Ground in January 1964 I wouldn’t have known this and would have missed my round of applause. This was our reward for beating Manchester City in the 3rd Round.

We went by train, a ‘football special’. I remember there was a shortage of programmes at the ground and I had an argument with one of my mates over possession of one. I won and I still have it in a box somewhere.  There were 16,000 there, which was a lot for Aldershot. We didn’t play well but early in the second half we scored through Don Rogers and later Bill Atkins scored a second. We then got complacent, Aldershot got a goal back and very late on their centre forward missed an open goal. We came away with a rather lucky 2-1 win, but that didn’t matter, we were in the hat for the 5th Round draw. When the draw gave us a home tie in February against West Ham United, who we’d already played twice in the League Cup back in November we were ecstatic. Now we’d show these cockneys what was what!