Throughout this season Mike Minihane will be taking a look back at Swindon Town’s first season in the ‘big time’, following the promotion to Division Two for the 1963/64 season. Mike continues with a review of November 1963…

November 1963 promised to be a tough one with league games against some high quality opposition, as well as a League Cup Third Round tie with First Division West Ham.

First up was a home league game against Southampton, which turned out to be a bit of a Paine. We didn’t like Southampton. Their fans always seemed to think their team were bigger and better than they were. Also their star player, Terry Paine, particularly annoyed us; firstly because he was a good player and secondly because he obviously knew it.

Quite a few Saints fans had made the trip to the County Ground, contributing to a gate of almost 22,000. There had been heavy rain and the state of the pitch helped us take an early lead; as a back-pass stuck in a puddle and Jack Smith stabbed home a predatory goal after eight minutes. All was looking good at this point but Southampton started to get a foothold in the game and Terry Paine started to show why he’d been called up for the England squad; giving our left back John Trollope a torrid time.

Shortly before half time Paine waltzed down the right, John Trollope launched himself into a totally mis-timed sliding tackle and went hurtling off the pitch into the barriers leaving Paine to run on to beat Mike Turner with ease for the equaliser. It was hard to take and got harder in the second half when Paine set up an easy goal for some young up and coming striker called Martin Chivers, whoever he was. It was our first home defeat of the season, all the more unthinkable in that we’d given the points to Southampton of all people. Just over two weeks later Terry Paine scored a hat-trick at Wembley in England’s 8-3 rout of Northern Ireland. 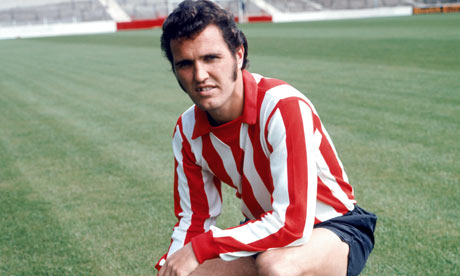 The following Saturday we faced a tough trip to 6th placed Middlesbrough, where few of us expected to get anything. However we atoned somewhat for the Southampton disappointment with Ernie Hunt’s late goal giving us a 1-1 draw and a very well earned point. Next up was a home game against another half-decent side from the North East in the form of Newcastle United, who were under-performing and down in 17th place. Playing for the opposition that day was Willie Penman who was to become a great favourite when he joined Town in 1966 and went on to be a part of the 1969 League Cup winning team. He didn’t score that day however, and neither did anyone else in a fairly drab 0-0 draw.

The following Tuesday promised some great entertainment with the visit of West Ham United in a League Cup Third Round tie. West Ham had a strong side out with some experienced professionals like John Bond and Peter Brabrook together with young talent in the form of Ronnie Boyce, Martin Peters and, of course, Geoff Hurst.  Like many games we’ve had with the Hammers it was a thriller. We didn’t know what hit us as Ronnie Boyce and Peter Brabrook put the opposition two up within the first 15 minutes but goals from Don Rogers and Jack Smith put us on equal terms by half time.

The Hammers led again through a Geoff Hurst goal but seven minutes from time Ken McPherson headed home from a corner to give us a relay at Upton Park the following Monday. After a thrilling six-goal cup tie and a decent result against a First Division side, we went home pretty happy. The replay put us in our place however with West Ham, bolstered by the presence of Bobby Moore, cruising to an easy 4-1 win with goals from John Byrne, Peter Brabrook, Geoff Hurst and Tony Scott, with Don getting our consolation goal.

The following Saturday saw us travel to Huddersfield Town for an unremarkable 2-0 defeat and a week later we shared a rather dire 0-0 home draw with Derby County.  It had been a bad month with no win recorded in five league games and two cup games. What was particularly worrying was that the goals had suddenly dried up; we’d only scored two goals in the five league games during the month and failed to score in the last three.

Probably reflecting this, the attendance for the Derby game was less than 16,000, the lowest of the season to date.  We were however still 4th in Division Two, behind Leeds United, Sunderland and Preston North End, illustrious company to say the least, and that was way beyond our wildest expectations at the start of the season.  December beckoned; surely we’d get back to winning ways… 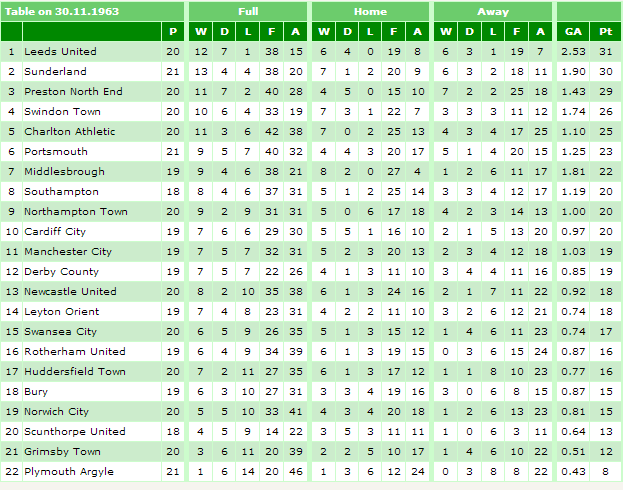