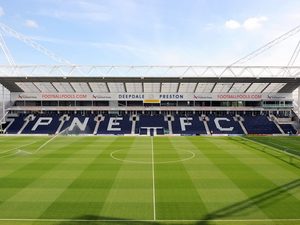 After playing in the limelight in midweek, Swindon Town travelled to Preston North End hoping to secure a first away league victory of the season. Vic Morgan was one of 386 Town fans making the trip up the M6…

Lets face it Saturday was awful. There must be something about Preston North End and Swindon Town at Deepdale. Twelve months ago it was Water-bottle-Gate and the substitution of Wes Foderingham. It was also a 4-1 thrashing and another Paolo Di Canio rant.

One of Di Canio’s forgotten few made the pre match headlines. Lee Cox, a midfielder who’d been signed and then consigned to the loan market was back in the squad after injury and hoping to impress Mark Cooper. Cox was destined to remain seated and it was another sub late in the game who caught the eye.

Swindon were on the back foot from the off. Experienced striker Kevin Davies made his presence felt for the home side in more ways than one. It was his effort which brought about the first goal. The Davies effort parried by Foderingham and the follow up header put into the back of the net by Ian Hume after just 11 minutes. It looked like it was going to be a long afternoon and a repeat of twelve months ago.

Preston were bigger, stronger and quicker to the ball all over the pitch. North End made full use of the Deepdale surface and just didn’t allow Swindon to play their short passing game. It was a Davies challenge of Nathan Thompson which eventually led to the Town full-back having to leave the field and giving Jack Barthram a Swindon debut. To arrive at half-time just one down was something of a relief. It meant that despite being battered for most of the first 45 minutes, the Robins were still in with a shout.

That though was made very difficult by a comical second. Jay McEveley somehow looped the ball over Foderingham’s head and the Swindon goalkeeper couldn’t prevent it crossing the line. For the next ten minutes the Town appeared to be all over the place. Preston took a succession of shots which didn’t find the target.

Remarkably the introduction of El-Gabas almost brought about an incredible Town comeback. Dany N’Guessan’s curler reduced the arrears and it appeared an unlikely and, quite frankly, undeserved point may be possible. Yasser Kasim brought a great save from Rudd when his bullet appeared destined for the top corner. That then was that. A disappointing day which highlighted Swindon’s lack of physical presence. Preston were just too strong. Okay there were some strange decisions, but that couldn’t cover up that the Town were well beaten.

A nice touch in the away end. A poster declaring “Thanks for travelling”. It was a long way from Devon and a long day. At the end of a difficult month though, Swindon are comfortably in mid table. There are injury concerns. Nile Ranger’s absence was crucial. Also injuries picked up by Nathan Thompson and Nathan Byrne are troubling. Could be time to dip into the loan market again…