Posted on September 9, 2013 by TheWashbag 3 comments 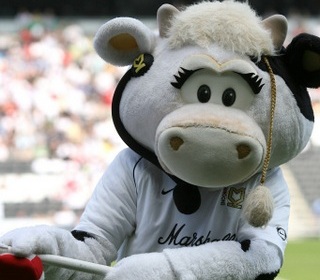 In game week six of Sky Bet League One, Swindon Town pitted their wits against MK Dons.  Swindon Town shared the points with the Dons, with encouraging performances from all 14 that took part, reports Matthew Peach.

Swindon Town went into their clash with MK Dons on the back of two impressive wins, one in the cup and one in the league. In these two games the Robins managed to keep two clean sheets and score seven goals in the process.  Confidence was certainly high leading up to the lunchtime kick off in front of the Sky cameras.  Town named an unchanged lineup to face the Dons which meant controversially signed Nile Ranger would make his fourth start for the Robins.  I personally felt that Swindon had enough in them to beat the thin squad that is MK Dons and make a real statement to the rest of League One.

Town got the game underway and started quite brightly.  However, it was MK Dons who carved out the first chance when former Town loan target Danny Green had a scuffed attempt at goal easily claimed by Wesley Foderingham.  The Dons controlled possession in the early stages of the game,  however were not very effective with the ball.  They often lacked the final pass after their neat build up play.  This was mainly down to the holding role of Yaser Kasim.  Kasim managed to break up play well in his deep lying midfield role and make crucial interceptions throughout the game.  With the new system Swindon have adopted, he plays a crucial role in breaking up play and starting attacks.

It was not long before Town started creating chances at will.  Firstly it was full back come left winger Nathan Byrne who put a delicious ball into the Dons area, unfortunately it just evaded Ranger and Alex Pritchard.  This was a sign of things to come. An even better chance came on the 6th minute when Massimo Luongo blocked on loan Jason Banton’s in field pass, kindly falling into the path of Ranger who teed up Pritchard to take aim from just inside the area.  David Martin, MK Dons long serving keeper (well long, compared to the length of League One players stay at clubs in modern day football) pushed away Pritchard’s attempt.

MK Dons had a few half chances that came to nothing.  Their lack of an incisive pass came to pay when Massimo Luongo bought Town a free kick on the edge of MK Dons area.  Alex Pritchard, who has a wonderful free kick in his locker stepped up for the free kick with Jay McEveley, and  whipped the ball over the wall and straight into the top corner.  A free kick of the highest standard.  This put Town deservedly in front.  As you will see, he’s done it before.

Swindon didn’t stop there and almost straight from the kick-off created another golden chance when McEveley’s overlapping run from left back put him in a crossing position and he whipped in a cross that somehow missed all possible targets.  This was an encouraging start for the 639 travelling Town fans, who were in good voice.

Not many other chances were created in the first half. Chelsea’s on loan Patrick Bamford played a nice one two with Danny Green and saw his left footed strike expertly blocked by Guess Who? Kasim. MK Dons pressed for a first half equaliser, but they were thwarted by blocks by Grant Hall or clearances by Darren Ward. Pritchard continued to be a thorn in the MK Dons side, although he was unable to create any chances for the Town frontline before half time.

The sides came back out for the second half, with Swindon hoping they could have more of the same and kill the game off. This was a premature thought as, on the 51st minute Nathan Byrne was shown his marching orders when referee Stuart Attwell deemed his ‘lazy’ challenge on Sean Williams as a straight red.  Personally I can see a case either way for Byrne, however, I have seen worse challenges not even punished, so it certainly was a bitter blow to take.

Swindon now were trying to calm down and be tight for the next 5-10 minutes. This was not the case when Darren Potters through ball split Hall and Ward apart and gave Bamford the chance to latch on to it and calmly flick past Foderingham on the 54th minute.  Up until then the back four looked very solid and didn’t look like they would concede such a sloppy goal.  Does this again raise questions about a lack of experienced heads – Darren Ward aside –  needed to calm down and settle the youngsters after the dismissal?  I say no. Town managed to hold on for a precious point at Stadium:MK and kept together very well as a side, showing a maturity that belies the youth in the team.

The Robins almost came away with nothing when Bamford’s scuffed shot found its way into the path of academy graduate George Baldock.  Baldock provided the finish between Foderingham’s legs, but his celebrations were cut short when the linesman flagged him offside. This was in the 89th minute which would have made near enough impossible for Town to respond with 11 men, let alone 10.

Fortunately, Swindon held on to pick up their first points on the road this season following defeats against Peterborough and Shrewsbury. Before the game this would have seemed like a good result, but taking into account the performance of the first half, I am confident that with 11 men Swindon would have been returning to Wiltshire with three points rather than one.

The Swindon faithful also got to see new signing Dany N’Guessan make his debut coming off the bench to replace Pritchard in the 72nd minute.  In the brief period he was on, N’Guessan was able to make an impact; he looked a dangerous outlet who can  play on either wing and who will add competition for places up top.  Town fans also got to see more of on loan Posh forward Nicky Ajose. Although the circumstances in which he joined the game didn’t really suit given Town were a man down. I saw more than enough to be confident he will be a welcome addition to the squad and have a part to play in future successes.

Where now? Town face a tough trip to much fancied Wolverhampton Wanderers before home games against Bristol City and Chelsea; all eagerly awaited games for thousands of Swindon fans.  To round the month off, it’s a trip to Lancashire to face Simon Grayson’s Preston North End.  September will be a testing month for Cooper’s youthful and exciting side, and we will have a much better idea of how our season will pan out following these games.

See you at Wolves