What should Swindon be looking for in a lone front man? 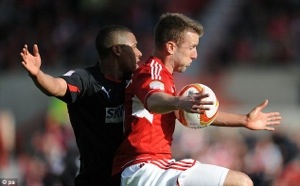 Swindon Town seem to have a problem scoring goals at the moment. Some choose to blame the 433 system, many blame the lone, central striker: Andy Williams.

But what can be done? Chairman Jed McCory has stated his desire to add one, perhaps two strikers to Town’s line-up, including bidding twice for Bournemouth’s Wes Thomas. But he isn’t the only man in the frame, also linked have been: running-rebel Leon Clarke, titular-tattooed tit Nile Ranger, direct winger Dany N’Guessian and lumpen target man Mamady Sidibe.

It is an odd collection of players – each quite different to the last. But what attributes should (caretaker) manager Mark Cooper be looking for in a lone forward? What makes a good solo striker?

It’s difficult to answer because it which hangs off another question – what type of football do you want to play? Because in the 25 or so years in which true single striker formations have been used, many different interpretations and individuals have been used.

Lone strikers can and have been everything: creators, finishers, destroyers, runners, static target men, deep-lyers, even non-goal scorers.

What is clear is the goal – the everything man – the unachievable archetype who can do it all. And most in these islands that is probably Didier Drogba. For the Ivorian played quite brilliantly in splendid isolation for Chelsea, particularly under Jose Mourhino.

A combination of brutish strength and athletic elegance, he was able to operate up top alone though speed, strength and aggression, but he also had the most refined touch and technique. His ability to hold up the ball meant Chelsea didn’t need to dominate possession or include play-maker at number 10: He gave them something favoured by every tiki-taka critic – the famed plan B.

Obviously Swindon will be unlikely to find a player quite as complete – and with the current style of play, it seems unlikely that the desire would be to aim for anyone whose sole function is to hold up the long ball – except that is what Mamady Sidibe does.

Sidibe goal-scoring record is pretty dreadful (42 goals in 269 league starts) but there are examples of non-scoring forwards succeeding at a higher level: Stephane Guivarc’h, for starters.

In French club football, Guivarc’h had been the golden boot but in the 1998 World Cup, he failed to notch even once. Yet he has a winnner’s medal because of what was behind him: Zinedine Zidane and Youri Djorkaeff. In that team, more 4321 than anything else, Guivarc’h was the pivot, a facilitator for others’ talents – much like the similarly pilloried Serghino for Brazil in 1982.

However, Swindon aren’t quite as sumptuously talented as France or the Selecao of Zico, Socrates, Falcao, Eder and Cerezo. Goals, as well as hold up play, will have to come from the central striker, which points again towards the scoring records of Clarke (72 in 158 starts) or Thomas (43 in 106).

Looking at more predatory strikers It is notable how many aren’t particularly good at holding up the ball, instead rely on possession. Take Robert Lewandoski, perhaps currently the most coverted centre forward in the world, data from WhoScored.com shows that his link-up play in largely poor. Instead he relies on rapier thrusts from the high Dortmund midfield which he finishes, much like an orthodox forward. His contribution to link up play is minimal. The same can be said of Radamel Falco who had a fearsome goal record in Madrid but very little in the way of assists for others.

Instead, both are noted for their finishing power and desire to shoot early. Neither are physical dominant but both are able tussle before suddenly popping up in the channels to finish – something that the squat Miroslav Klose has turned into a fine art, and Wes Thomas seemed to also do it rather well when he was at Cheltenham Town. Ranger (four in 15) seems to be more of this mobile school of striker – electronic tag dependent.

Some clubs even rotate their loan strikers to suit their needs: Bayern Munich previously used the predatory but sometimes lazy Mario Gomez as a focal point but sacrificed his goals for the boundless, if raw, energy of Mario Mandžukić for speed on the counter, and partly as pressing would stop the opposition playing.

Dany N’Guessan is perhaps the most surprising choice of all – and yet now seems the most likely. With a reputation as a left-sided wide man rather than central striker, he has a goal record to match it (31 goals in 125 League starts). Despite having played as a lone striker for Lincoln, it seems more likely that his role would be as an additional, direct threat in the channels. In a way, he would be pursuing the same function as Williams – looking for early balls to spin off the centre back and pursue into the channel.

If single quality in what makes a good lone striker has to be picked, it has to be positioning and tactical intelligence. They need to know that there is no point making a long bending run into the channel, unless the wide midfielder has dropped deeper pulling the opposition full-back up. They need to understand that if you press to win the ball back, you need to do so in an area in which winning the ball back will allow you to have a shot on goal. They need to be able to rotate into midfield as movement in a 433 is everything.

It is clearly a difficult role, demanding everything including awareness, execution and technique. Which really bring us back to the second questions – what type of football do you want Swindon to play?