There really was only one Jimmy Davis

Sir Alex Ferguson said he had ‘great potential’. Andy King described him as ‘an inspiration’ while Sam Parkin suggests he could have been ‘better than James Milner’. Sadly, though, after Jimmy Davis’s untimely death in 2003, we’ll never get to find out if they were right. Writes Nick Judd.

Davis was killed in a car accident in the early hours of August 9th. He was 21 years of age. The news shocked the football fraternity, particularly the Manchester United, Watford and Swindon Town communities.

Cast your minds back to that day on August 9th. Sheffield Wednesday and their huge following were in town for the 2003/04 curtain-raiser and Andy King was looking forward to unleashing his new signings, which included Tommy Mooney and Sammy Igoe.

Hope and expectancy had hung in the air.

That morning, the club office had been a hive of activity. There was always something special about working the opening day of a new season and this was no different, but smiling faces and excited emotions made way for worrying glances, quiet whispers and, as details confirmed the news, tears from those who had dealt with Davis on a day-to-day basis.

“I remember driving down for the game and hearing on the radio that a Watford footballer had been killed in a car accident,” recalls Parkin. “Later, we heard it had a been a loan player and deep down I think we all knew straight away.”

“Jimmy had already left Swindon to take the next step in his development when the sad news broke, but I remember feeling shock,” admits David Duke. “It’s always tougher to come to terms with a young death, but I’d seen his potential, which made it a greater shame.”

Enthusiasm made way for disbelief in the stands, too. Davis was universally liked. He had only spent three months at the club but his impact – on and off the field – had been huge and long lasting. His displays on the pitch were on another level, of course, he had been well-schooled in Manchester after all, but he had conducted himself with an enthusiasm rare in loan players. He always had time for everyone. He interacted with fans and was a popular figure among club staff.

At the end of his short stay, Davis was given a rousing standing ovation. In return, he gave his boots to one lucky recipient before leaving the pitch with a tear in his eye. We counted him as one of our own and the feeling, it seemed, had been mutual.

Back to that opening day and down by the touchline, after the players had taken to the pitch, a visibly upset Andy King entered the dugout. King was a huge fan of Davis and had tried to extend the starlet’s initial loan stay and later re-sign him ahead of the 2004/05 campaign, only to be rebuffed. King admired Davis’s talent and liked his attitude. Above all else, King enjoyed his affable personality. He wasn’t alone.

“I was tearful before that game,” admits Parkin. “It was the shock, mainly. We just couldn’t believe it. Jimmy was one of those lads who just fitted in. He was a nice guy. His talent was obvious but he was unlike other loan players. He worked hard at training and made a real effort to mix in. We were gutted.”

Understandably, Town found themselves three goals down inside 25 minutes but it didn’t matter. Football had taken a backseat. 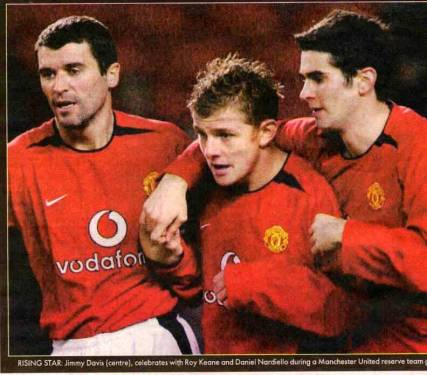 Parkin is particularly effusive of Davis. The previous season, on the opening day against Barnsley, a trademark mazy run and fleet of foot had seen substitute and debutant Davis upended and Parkin the lucky recipient of a spot-kick. Even in his brief cameo, Davis had set tongues wagging.

He was a nightmare to defend against. He had pace, trickery, low centre of gravity and drop of the shoulder would send opponents into a spin. Just ask Wycombe. Or Brentford. He was a bundle of energy, a catalyst for exciting attacking play and at times the ball seemed stuck to his boots.

“Jimmy was real prospect,” says Duke. “He had an abundance of natural talent and pace. That mixed with a strong professional mind for such a young lad would more than likely have taken him all the way to the top. He was very ‘Man Utd’ in that he took his career very seriously, managed himself very well on and off the pitch. I was fortunate enough to play behind him at full-back on a number of occasions. He made my role much easier. I just wanted to get the ball to him!”

“It’s easy to say he could have done this and that, but I honestly thought he was that good,” says Parkin. “He had everything, from ability on the pitch to the right attitude off it. Swindon had a lot of loan players during my time there, including people like James Milner, but I thought Davis was better. I was sure he would succeed at the very highest level. He was special.”

Parkin later paid Davis a fitting tribute by scoring twice when Swindon travelled to face Redditch in the inaugural Jimmy Davis Memorial Cup in July 2004 (Watford, and FC United continued the tradition in ensuing years). More than 1,600 fans (from Swindon, Manchester and beyond) attended the game. Before that, of course, Town fans had paid their own respects with an immaculate minute’s silence before an encounter with Notts County. Jimmy’s mum, Jenny, had also given a rousing speech before kick-off. There wasn’t a dry eye in the house.

Ten years on and Town paid tribute once more with a rigorous minute’s applause ahead of Tuesday night’s 1-0 win against Torquay United.

There really was only one Jimmy Davis.