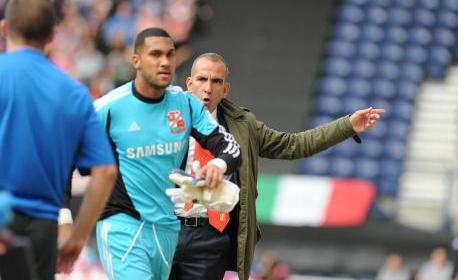 But let us start at the very beginning.

Fresh in the minds of all were those heady days of late April & early May which saw us demolish Port Vale 5-0 to seal the title and then an unforgettable jaunt upto Bradford the following week to end the campaign. The close season had seen the arrivals of Gary Roberts, Andy Williams, James Collins, Alan Navarro, Tommy Miller and Troy Archibald-Henville. Jay McEveley, who’d been on loan, also joined on a permanent basis. My initial thoughts were impressive and I saw no reason why Town couldn’t be up challenging for promotion again. Well, I understate myself. What actually happened in late July was I put £80 on us to win the league. Meh.

Meanwhile, at the start of the month, the lads were on another pre-season tour of Italy. A Verona Select XI were put to the sword in a game more about fitness and training than the actual result and then came along Bayern Munich. Okay, it was their reserve team, or Bayern Munich II as they seemed to be called. They had Tobias Schweinsteiger in their starting line-up – obviously not as good as his famous brother but I’d rather we pit our wits against this type of opposition than the likes of FGR every ****ing season. Oh, take note – Friday 12th July 2013 – Forest Green Rovers v Swindon Town has already been confirmed. Splendid.

The Germans had some wonderfully named players in their starting XI: Riedmüller, Rothenbücher, Fischer, Hürzeler and Schöpf. This was evened out with the inclusion of former Tranmere Rovers pleb Dale Jennings amongst their number. The game was drawn and Town returned home to fulfil their domestic duties including a 1-0 defeat to Crystal Palace in front of 4300 people at the CG.

For whatever reason the season began with a league cup match at home to Brighton that was picked out for live coverage on Sky TV. I spent much of the first half pub-hopping through Biggleswade trying to find somewhere showing the game. I managed to eventually stumble upon the ‘Gardeners Arms’ in time for the second half and was witness to an impressive performance, three goals and a renewed sense of optimism for the season. Also, thanks to Twitter, I announced to the pub that Margaret Thatcher had died (I know, what are the odds?!) before it became apparent I’d fallen for another one of those spoof accounts. Anyone would think I’d had too much to drink. Also worth noting that both Brighton & Crystal Palace reached the Championship play-offs this season.

Off the field already there were reports regarding the bust-up between Paul Caddis and Paolo and how the captaincy had been stripped from the Scot. We really didn’t need this **** and memories of Kerrouche and even Leon Clarke came flooding back to the fore. Ultimately, there would be no reconcilliation or ceasefire and, at the end of August, Caddis went to Birmingham City on loan in exchange for Adam Rooney.

Our first league game of the new season saw Town take over 450 fans up to Hartlepool. Earlier in the day the draw for the JP Trophy had been made and of course we drew Oxford Utd away. I was down in Sussex on this day in particular but I did come across a pub called the ‘Moonrakers’ leaving me in no doubt that we were destined to have a good season. As I knew Richard always likes to travel to our first league game, I texted and wished him a safe drive up north and to bring back the three points. He thanked me for my concern before announcing he was actually on holiday in Portugal. Oh!
The main talking point from the goalless draw was the second-half penalty miss from Tommy Miller and the apparent bickering and meltdown that followed on various internet forums & social media. Seemingly, What I learnt that day was Miller deliberately missed his penalty because Hartlepool were one of his former clubs. Brilliant!

The following Tuesday saw me make my first pilgrimage to the Swindon Mecca to watch Crawey crumble 3-0 and I found it rather amusing to watch Tommy Miller score our second goal bearing in mind the stick he’d been getting since the weekend. MK Dons were next in Town and after Dean Lewington had been sent off on forty minutes, Matt Ritchie was on hand to open the scoring on the stroke of half-time. A 1-0 win was good enough. With regards to Lewington, he’d been sent off before against Swindon back in 2009. I really want him to make it a hat-trick next season!

So, 4 games in (including the League Cup) and we’d yet to even concede a goal. It really was just like a continuation of the previous season! Granted, the Caddis situation was like an unwanted rash but whilst all was good and rosy on the field of play, tempers and inflammatory opinion were under control – and things were just about to get even better.

The trip to Stoke City for a 2nd Round League Cup tie was probably not the one we’d been hoping for. Sure, it was a Premier League side but I’d much rather have faced one at the CG. The fact we completely out-muscled and manoeuvred them in the first half and led by two was heaven in itself. It really should’ve been three but for the upright. Had it been a boxing match the towel would’ve been thrown in but, as was to be expected, the Stoke fight-back began on the hour mark when Kenwyne Jones rose above Foderingham to pull one back. Had we held on, it’d still have been headline news but the fun was only just beginning. Jon Walters slotted home the equaliser on 86 minutes as my heart disintegrated, yet we manfully held firm to take the game into extra-time. Aden Flint’s close range header had us in ecstasy but Peter Crouch came to the rescue with a thumping header of his own midway through the second period.

Whatever the outcome now, no-one could deny we’d gone toe-to-toe with an established Premier League team and held our own. With both teams visibly tiring there was of course to be one final twist in the tale. James Collins was on hand to slide in at the back post to grab a 120th minute winner and his hat-trick in a famous victory that’ll live long in the memory. A great night.

A few days later the transfer deadline came and went and of course the revolving door of Paolo and Swindon Town was as busy as ever. Newbies included Darren Ward, Giles Coke and our old friend John Bostock on loan. Fede Bessone joined from Swansea and of course Adam Rooney came in from Birmingham for Paul Caddis. Oliver Risser was loaned out to Stevenage.

Our next league game was at Preston North End on the Sunday and this was one I’d long been looking forward to. It was the first time we’d played them since 1986 – and a new ground for me so I was bouncing around like kid on the train up north. I think I got to Preston about 5 hours before kick-off which allowed me ample time to sample the Lancastrian delights. I was confident, perhaps over confident of victory. Why wouldn’t I have been? Even Ian Leney had driven up from the dark depths of South London for this one. In fact Town had over 850 fans that day which must have caught Preston off-guard as I, along with others, had to wait whilst they printed out more tickets for us to gain entry!

Anyway, the game itself – not to mention the aftermath and headline news yet again for all the wrong reasons. Preston were worthy winners. 2-up in ten minutes, we never really recovered. There were signs of a fight, a goal back but ultimately it was a heavy defeat to a team I thought looked pretty good. But that just goes to show how little I know about football. Preston would go on to win only 2 of their next 14 games at Deepdale and it was this sort of record that would cost Graham Westley his job.

Now back to the game. On the 20-minute mark Di Canio substituted Wes Foderingham. It was a strange and perverse decision. Wes had a bit of a blunder for one of the goals I recall, but I think what stoked Paolo’s fire was his reaction in blaming the defence. In a post-match interview Paolo commented on Wes’ performance at Stoke City and that his attitude was all wrong and he was nothing before “I” brought him to Swindon. What made the situation worse was Fodders reaction to being replaced. Ignoring the bench he made for the tunnel kicking a water-bottle in a sign of frustration. It was a nightmare. Preston fans were lapping it up, we were at sixes and sevens and young Leigh Bedwell had been thrown into the spotlight. Truly, a day to forget. Foderingham soon apologised for his behaviour and reaction and the incident passed, but not before a superb interview with Jeremy Wray on 5Live who defended Paolo to the hilt and came across as a superb mediator to quash the mainstream media.

Phew. We moved on…

Additional: On the way back from Preston I had to make a change at Crewe and in the 10 minute wait I decided upon mysef I had enough time to see if that chip shop near the ground was open! Brilliant. Of course it was Sunday night and of course it was closed and of course I missed my connecting train. I spent an hour in Crewe cursing anybody who’d listen.

And then came a trip to Oxford Utd. Oh Jesus. It’s never-ending. Paolo threw in the likes of Bessone, Ward and Coke for this – along with Adam Rooney. I couldn’t make the game but I still remember shaking like a beaver and being as nervous as hell following updates online. The fact it was a JPT game didn’t matter. I didn’t care one bit about losing in this competition. However, I did care about losing to Oxford. We never did make the breakthrough and from what I can gather a horrendous mix-up between Flint and Ward allowed some little ****er to fire home the winner late on. Absolutely gutted. And as to be expected the stick and flak coming Darren Ward’s way was par for the course from the keyboard warriors. Moving swiftly on.

The 8th September was a bloody hot day. I was in Wealdstone watching Biggleswade Town die on their arse in an FA Cup Qualifying game. I don’t often get naked on the terraces but that day was one where I’d have happily spread myself full monty style. Town were at home to Leyton Orient. The Londoners had lost 3 out of 3 so far and many, myself included, expected a walk in the park. Al-Jazeera Sport had decided upon themselves to broadcast this game live to the masses fully anticipating a cut-throat massacre – We lost 1-0. I really can’t comment on performances I haven’t seen, but from the post-match twitter meltdown it was a black day that saw us drop all the way down to 11th place!

Next Time: Hyperventilating at Portsmouth, infiltrating the home ends at Stevenage, more train woes, Charlie Austin and Miles Storey causes me to have an accident in my pants.