Jed McCrory and the youth of today 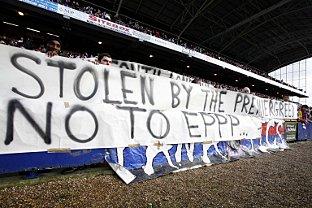 From halving the wage bill, releasing Simon Ferry and giving deals to five scholars, Jed McCory’s Swindon board are keen on building a younger, cheaper squad, but outside forces are also pushing every Football League club that way, says @STFConly.

We all know now the years of spending at Swindon are over. Regardless of which figure you take, from BBC Wiltshire’s £2 million to Sam Morshead’s £2.4 million, the cuts are clear – more young players and a reduced Swindon squad in number, wage, age and probably quality.

The board also picked a manager in Kevin MacDonald with a history, and an interest in, those on their way up in the game, rather than just experienced ‘protagonists’.

But the board’s desires and the manager’s inclination aren’t the only reason that Swindon are looking at investing in youth – things beyond the walls of the County Ground are changing too.

The financial structure of football has altered, at least in the Football League. From next season, the Championship will have a limit on how much each chairman can inject while in League One there will be a further 5% reduction in the wage cap – from 65 to 60%. And while the wage bill at Swindon will be significantly lower than under the last embargo the sum is connected to turnover and if there are reduced attendances that could still render the cap significant.

If that doesn’t start to increase the need for young players and their lower wages, what is follow certainly will. The much vaunted ’emergency loans’ which have provided MacDonald with Massimo Luongo and Nathan Byrne will cease to be allowed after next season. These loans were created by FIFA after an appeal by the Football League but that dispensation will end in 2014. This will bring the Football League into kind with the rest if the world, at the same time increasing the demands on a club’s own players.

The result will mostly likely be that clubs will need more players to cover injuries and since the wage cap will further limit how many can come or, or even be borrowed, a stronger youth team to promote from will become even more vital across the lower tiers.

Of course, borrowing young and youth team players on season-long loans remains another option – but even this route which Town have used in the past looks seems to be in a state of flux.

From last summer, the Elite Player Performance Plan (EPPP) came into force, and as a consequence altering the landscape for loans from the higher leagues. While the EPPP has been widely discussed, primarily in the context of depressing up-front transfer fees for Football League players, it also introduced the U21 League. This structure, which Town seem to be planning to join – albeit at a lower level – is dedicated to giving Premier League youngsters a stepping stone into the full time.

Rather than being a rebranding of the old reserve leagues, it offers could rival first-team football. Terry Westley, the Premier League’s senior club youth development support manager told the Guardian that the U21s will be a direct rival to sending future stars down the pyramid. “It is an alternative to sending players out on loan, if the games are played in the main stadium with supporters watching – the loan system will still be used where it’s right for the player” he said.

While Everton’s Under-21 coach, Alan Stubbs, is quoted in the same article emphasising the value of loaning players to lower league clubs for them to learn that “making a mistake matters – there are consequences” it will be interesting to see how the change pans out in the longer term for clubs such as Town.

With seemingly less chance of bring players in on loan, or permanently, due to the imbalance in the current wage structure and seems highly likely that Swindon will be relying on not only the youth of today but also the youth of tomorrow as well.