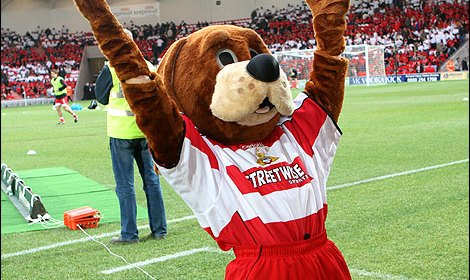 4th placed Swindon have six League One games remaining, starting with a trip to the Keepmoat Stadium, Doncaster on Easter Monday. Town are currently unbeaten in three games and 11th in the form guide with two wins, three draws and one defeat.

On their travels, Swindon won 2-0 away at Yeovil a few weeks ago to go 2nd in the away form guide with four wins, one draw and one defeat. Swindon haven’t failed to score an away goal for the previous six matches.

Doncaster Rovers are top of the table, also with six games remaining. Rovers suffered a 0-1 defeat at Coventry City on Good Friday, which was their first defeat in three games to put Donny 8th in the form guide with three wins, one draw and two defeats.

At the Keepmoat, Doncaster are unbeaten in four games and 6th in the form guide with two wins, three draws and one defeat. Donny haven’t failed to score as hosts for three games.

At Doncaster, Town have never won! Swindon have drawn four and lost five games, scoring only four and conceding 13.

In Swindon’s previous two visits they’ve been defeated without scoring.

Doncaster have been performing similarly to Swindon as hosts in terms of restricting opposition shots, however their save rate is very below par and likely to be the main reason why they’ve picked up 1.53 points per game, just below Swindon with 1.57.

Also, despite their strong League position these rankings do highlight the ineffectiveness in the host’s attack. A defensive focus has contained the opposition, however doesn’t provide the home support with an attractive attacking game, nor an exceptional strike rate to compensate. This is demonstrated by the only 24 goals scored as hosts this season, with 20 conceded and the most typical result at the Keepmoat at 0-0 draw or 1-0 win to the hosts.

The defensive balance is clearly there in the Donny side, however will that be enough to contain a fluid and attacking Swindon side that has only conceded more than one away goal only once this campaign..?

Doncaster have been stronger as the matches progress with only one goal early on as hosts.

Two goals for Swindon towards the end of the win at Yeovil has bumped up the tally late-on, but the periods either side of half time remain when the attack is at it’s most potent.

Rovers do concede early and also in the final 15 minutes as hosts, highlighting periods when they are prone to concentration lapses.

Meanwhile Swindon travel and typically concede within the opening 30 minutes. However that wasn’t true of our last away defeat at Brentford when two post 70-minute goals secured victory for the Bees.

Even though Swindon have never traveled home from Doncaster with three points, Rovers’ home form is no better than Swindon’s and they appear to be very vulnerable to a superior attacking side that can also defend. A win is a must to retain any opportunity of automatic promotion…