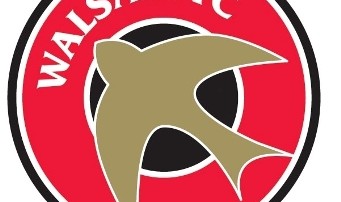 3rd placed Swindon were unbeaten in thirteen League One matches until Bury visited the County Ground just over a week ago. Following that defeat, Town secured their first comeback victory of the League One campaign with a late 2-1 win at Coventry City.

Walsall arrive in Wiltshire with an unbeaten record stretching back their last six games home and away, with five wins and one draw. The Saddlers are surprise outside bet for snatching a play off place, siting 8th with 55 points, 5 behind Tranmere Rovers.

On their travels, Walsall are unbeaten in three games with three wins, one draw and two defeats; keeping two clean sheets and failing to score twice.

In all League, FA Cup and Football League competitions, Town have faced Walsall on 89 occasions, winning 33, drawing 25 and defeated 31 times; scoring 132 and conceding 134.

Swindon are undefeated against Walsall in their previous six games combined home and away, and three games at the County Ground. That run has included three victories and three draws. Walsall have failed to score in the previous two meetings.

Town remain miserly in defence, giving their opponents few opportunities to strike at goal and win corners, however the save rate hasn’t kept pace, dropping to 72.5% which is ranked 16th strongest of all hosts. Although its not as simple as pointing the finger of blame at Wes Foderingham, as for instance, Bury’s only goal and winner came as a result of poor defending.

Walsall are weaker overall in these efficiency rankings in defensive areas. Their ranking shows they travel well and, despite conceding more possession, still manage a very respectable 10.6 shots per game with above average percentage of shots on target and strike rate.

Swindon typically start strong as hosts having opened the scoring in seven of their previous nine games at the County Ground. Opening the scoring has been crucial to Town’s success with Swindon losing their previous two games as host when conceding first – versus Brentford and Bury.

Watch out for Walsall in the opening 15 minutes and the final 15 minutes, as these appear to be their more lethal periods for finishing.

With Walsall strong at scoring towards the end of the 90 minutes, its important to note that, as hosts, Swindon have yet to concede after the 74th minute this season in League One.

I correctly predicted a 2-1 victory for Swindon and late goals for our trip to Coventry, so that’s my luck used up…

Hopefully MacDonald will impress in his first game as manager at the County Ground, securing a vital 3 points, particularly needed given very tricky away trips in weeks to come.

Town haven’t won as hosts for three games and an in-form Walsall are potentially the right type of visitors, i.e. not relegation battlers that Swindon seem to struggle against.

3-1 victory to Swindon and another comeback with Walsall opening the scoring.