Paolo Di Canio: And Now The End Is Here…

Paolo Di Canio has left the building. Carl McQueen of the We Are Going Up! Podcast reflects on his departure and a turbulent tenure at the County Ground.

Confucius once wrote (and then David Brent made it more famous for my generation) our greatest achievement is not in never falling but in rising every time we fall. Swindon Town have fallen further than most clubs and bounced back higher than many others. The national media will flick through their cliché thesaurus this week until they reach the page entitled “managerial departures” – cue headlines lavished with “CRISIS” and “TURMOIL” and “DISARRAY”. Welcome to SN1, the land of Swindon Town – if the Olympics live off a motto of Citius, Altius, Fortius then Swindon live off a motto of Crisis, Turmoil, Disarray. This is nothing new; this is expected.

That being said, it doesn’t make the shock of a manager walking out on the club any easier to comprehend or accept at first glance. Swindon have had managers far bigger than Paolo Di Canio before – this wasn’t a show pony that brought with him a history and media circus this humble Wiltshire club had never experienced. Glenn Hoddle, Lou Macari, Ossie Ardiles – all have called the Robins their managerial home and all had a greater playing career than Paolo Di Canio ever had.

It could be argued that players of the standard of Matt Ritchie have been rarer than the standard of big-name managers since Swindon’s Premier League debut, and only, season of 1993/94. When he departed to Bournemouth for a fee which was just a proportion of an offer for the same player from the same club in a previous transfer window, the offending straw had been slapped on to the camel’s back to break it into several places. Paolo’s letter of resignation was already in the post. The club’s exposure due to a live Sky Sports game against Crawley Town brought the issue to a somewhat unexpected public and was exaggerated for the purposes of selling a third-tier football game to a watching public unaware of ESPN’s Premier League offering.

For the previous twenty months, the rest of the Football League had seen Paolo just as many saw him as a player – a mercurial talent as well as playing the pantomime villain simultaneously. Many didn’t take him seriously, some were angered by his touchline antics and post-match comments, and those in the Town End saw him at his passionate best – cheering on a club he may not have known even existed a few years ago with such passion it was as if he was John Trollope re-incarnated. (granted, Mr Trollope Snr is still alive and well!)

Sky Sports talked of a Di Canio bidding farewell to a travelling band of faithful Town fans. But no departure came. No commitment from the Italian arrived either. The minutes became hours and the hours became days. Suddenly Swindon were back on the field of play and Di Canio was still in charge. What happened? Were the differences between him and the board settled? Evidently not.

Despite having been at the club for less than two years, Paolo’s history at the Robins could fill a biography far more significant and entertaining than that of any reality TV contestant who has released their memoirs as a last sign of desperation two years after finding temporary fame. In May 2012 he signed a new contract at the club after guiding them to the League Two title; an indication that he was still committed to a project that the then chairman Jeremy Wray admitted wouldn’t happened overnight. But then in November, Wray was replaced by Sir William Patey – a man more akin to the struggling democracies of Afghanistan and Iraq than the football pitch. Things then started to become clear that all was not well off the field – the new year brought with it the announcement that the club needed to find new investors with immediate effect or face administration – a state of disarray not unfamiliar with Swindon Town.

Thankfully owners were found, but what gives with one hand often takes with the other – Matt Ritchie was sold immediately. Di Canio released a statement saying he was considering his position as manager after suffering broken promises. Things had just got real. Di Canio had threatened making a bolt for the exit before, most noticeably when he said he felt the board had changed their ambitions for promotion. But the language Di Canio had used was never as forthright as this. 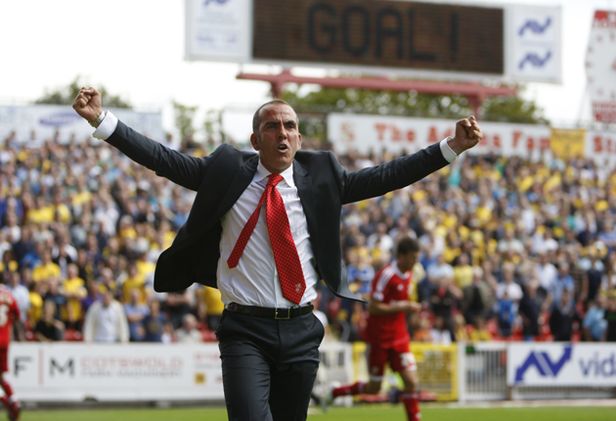 After valiant efforts during the Hartlepool United game on the 9th February from fans consistently chanting Paolo Di Canio’s name, he still wouldn’t commit his future. The history books will tell us he technically resigned on the 12th February 2013, but agreed to stay as long as the takeover of the club was fully approved by the Football League by 5 o’clock on the 18th February. The 5pm deadline passed and approval hadn’t arrived. Di Canio was gone. Approval was scheduled to be given on the 19th February. Di Canio was reportedly seen leaving the County Ground with “What a Diff’rence a Day Makes” by Dinah Washington blaring out of his car speakers. That last sentence may be fabricated.

He leaves behind not a club in turmoil however. New ownership approval is just hours away as I type this – leaving more questions over the timing of Di Canio’s departure – the Italian will have known full well the date of approval was the 19th, not the 18th when his deadline was. The team he leaves behind may have lost their talent catalyst Matt Ritchie but oozes talent elsewhere on the pitch in the form of Wes Foderingham, Alan McCormack, Aden Flint, Simon Ferry and James Collins – all individuals who any club in League One, and many in the Championship, would snap your hand off to take on board.

And what of Paolo? Ask Leon Clarke, Mehdi Kerrouche and Paul Caddis for a job reference and he’ll be lucky to find employment again. Look at the list of failed signings who he predominantly plucked from across Europe as if he’d used a map of the continent as a dartboard. Alberto Comazzi, Lukas Magera and Lander Gabilondo are just three examples of so-called “footballers” from three different countries who Paolo thought would cut it in the fourth tier of English football. How wrong he was. To say he can cut it at a higher level than League One is a massive risk.

Perhaps he’ll return to Italy or take up a coaching role – his enthusiastic yet strict coaching regime will unsettle some players but will ensure naive youngsters and those who want to achieve rather than just earn an affluent pay cheque will take on board what he was to say. Despite his penchant for the extravagant whilst a player, Swindon’s incredible defensive record will be arguably Di Canio’s longest lasting memory for a club who hold the unwanted record of conceeding 100 goals in a single Premier League season (42 games).

Paolo Di Canio’s tenure in charge of Swindon Town is now consigned to the past tense. Swindon Town and Paolo Di Canio as individual entities aren’t. Fans will have to get used to living life a little further out of the spotlight now he’s gone, like most other League One clubs do. The media circus will pack away and only return should Swindon maintain a play-off push or resume their fight next season. Whoever his replacement is they will seem like caffeine-free Diet Coke to Paolo Di Canio’s Coca Cola-style leadership and personality. It may be the unnerving sense of not being noticed for the first time in nearly two years that will stand Swindon in good stead for the rest of their league campaign…