Even within the dismal shower of Swindon’s former left-backs Jason Drysdale stands out. Squeezed between the likes of Hall, Elkins, Casal, Rose and Beswetherwick his name still seems to bob up and down – a floater in a sea of crap, a warning beacon of badness. The Shitting Forecast, if you will.

Drysdale has become is a byword for failure. While the others were known for being feckless, hopeless, toothless or just inept, he is remembered for being all of these things and many more. Not all of them were his fault but then as with any player who transcends plain old ‘not being very good’, circumstances weren’t exactly kind to him. 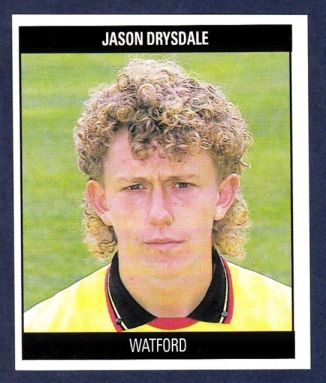 Part of the problem wasn’t just who Jason Drysdale was, more who he wasn’t: he wasn’t Paul Bodin and he wasn’t Jan Aage Fjortoft. Instead he was deadline-day desperation signing by a struggling manager for a struggling team. Hindsight, through its telescope of cold dispassion, might show us that it is unfair to hold him responsible for Steve McMahon’s ego-driven sale of his star striker or the cold-shouldering of his left-back but that isn’t the way that many Town fans felt about Drysdale back then, primarily as the money for his signature came from the flogging of the Norwegian. He also wasn’t responsible for the dreadful planning that had seen long deals dished out to has-beens during the Premier League season or the appalling form that followed, first under John Gorman then McMahon. But then Drysdale did little to persuade the terraces of anything positive during his three-year spell at Swindon.

In fact Drysdale has become the player who almost more than any other is identified with the end of the top-flight dream. His signing, and Jan’s sale, marks the day when reality arrived in Swindon – the nasty reality that Town’s upward trajectory, started by Lou Macari, was going to turn downward for a long time to come.

That £340,000 transfer fee and who he replaced were millstones around his neck from the start; which is odd because his neck was the one part of his balsa-strength body which never failed him. For he was in many ways as a player he was like a Stradivarius: fragile, unbelievable expensive and wholly unsuited to football. Injuries seemed to follow him, gang up on him, to mug him while he slept. He seemed able to strain, pull, tweak, snap, fracture, total and twang parts of his body that even House would need to a medical dictionary to find. He collected just 36 league starts between March 1995 to March 1998 at a rate of less than 15 per season.

During those relatively rare forays onto the field, he hardly shone. The odd pass, such as the one which released Steve Cowe against Bradford showed why Newcastle had to use £425,000 reasons to convince Watford to release him. However, neither Newcastle thought him good enough to actually play (0 appearances) and those Watford fans, who saw him play the vast majority of his 135 league games, seem even less convinced by him.

But his over-valuation was a product of the climate. Not only was he a deadline day signing but this was an era when prices for British players were already artificially inflated. And with the Bosman ruling not coming into force later until that year and the 3-5-2 formation very much in fashion in the largely insular English leagues, left-backs, particularly attacking ones – regularly commanded over-inflated fees.

For the majority of his playing time at Swindon though, Drysdale struggled. He fell between two stools – for once not literally: too delicate in defence, too limited in attack. His low, soft crosses hardly seemed the ideal replacement for Bodin’s precision delivery and attacking poise. He didn’t really tackle, preferring to lightly buffet the winger as a butterfly does a passing articulated lorry. Instead of lunging in, he would wait for one of the big boys at centre back to deal with any attacker, at which point the cross had long been converted into a goal.

It can’t have been a surprise to anyone, even McMahon, when he was finally released, and while everyone from Mark Robinson, Ty Gooden and even Lee Collins filled in for him, the left-back position didn’t really become settled again until Sol Davis kicked his way on the scene.

After Swindon, Drysdale played a single league game for Northampton Town before embarking on a downward spiral through West Country football with Forest Green, Bath, Paulton and Mangotsfield. While his descent into obscurity was as rapid as his rise, few managers or fans have ever been able to see what inspired Swindon Town to pay a fee which equates to almost £10,000 per league start for the damp squib that was Jason Dysdale. Welcome to the Hall of Shame, but watch that step on the way in.

Read More Tales from the Swindon Town Hall of Shame…