A crowd of 14,434 witnessed a great night of cup football at the County Ground as Swindon lost 3-2 to Premier League side Aston Villa. Writes Adam Johnson.

It was physically exhausting, dramatic, intense and loud. That’s what it was like for the fans, let alone the players, as the County Ground was treated to a special cup game.

Swindon did themselves proud after a hard fought display where everything truly was left on the pitch. No Swindon fan could ask for more and even in defeat, we can be cheerful.

Paolo Di Canio almost masterminded a victory over a Premier League manager as his three substitutions nearly brought about the comeback.  Hopes would be dashed after Miles Storey’s equaliser as Christian Benteke curled an effort past Foderingham to steal the win in this pantomime drama.

Swindon lined up in a flat 442 formation as Jay McEveley, Gary Roberts, Simon Ferry and James Collins came back into the starting eleven after the 4-0 win at Stevenage.  Experience and strength was the plan as Benson and Collins both started to utilise a first half tactic of long ball which worked well.

Neither team took control in the early stages but signs of Villa’s difference in class were showing in bursts. Lambert’s side started in a 433, switching to a 4-2-3-1 formation utilising the pace of Weimann and Agbonlahor as often as possible on the wings with the latter proving the most influential.

The Premier League side seemed to have installed a switch in the dugout which would up the pace and attack the space when possible. It was these moments that showed Villa’s quality and would be the catalyst to show the gulf between the sides in the first 45 minutes.

The game started in a gritty fashion with Villa slightly on top with possession but it was Swindon who created the first chance. Paul Benson’s turn in the box and shot was cleared off the line with the various rebound efforts proving unsuccessful.

Villa would capitalise as good sides do only three minutes later. Stephen Ireland broke away from the chasing Simon Ferry to cross for Belgian international Christian Benteke, who got between McCormack and McEveley, to head in from close range.

With Agbonlahor proving a menace for Joe Devera, Stephen Ireland linking up the play in centre midfield and Andreas Weimann showing a few good touches in and around the box, Villa looked most likely to get a second and they did fulfil this prophesy.

The pace and class of Agbonlahor beat Devera and the chasing pack to drill the ball past Foderingham, the dream of a quarter final seemed over the hills and far away. It would have been three if not for Foderingham who kept Swindon in the tie with a point blank save near half time. 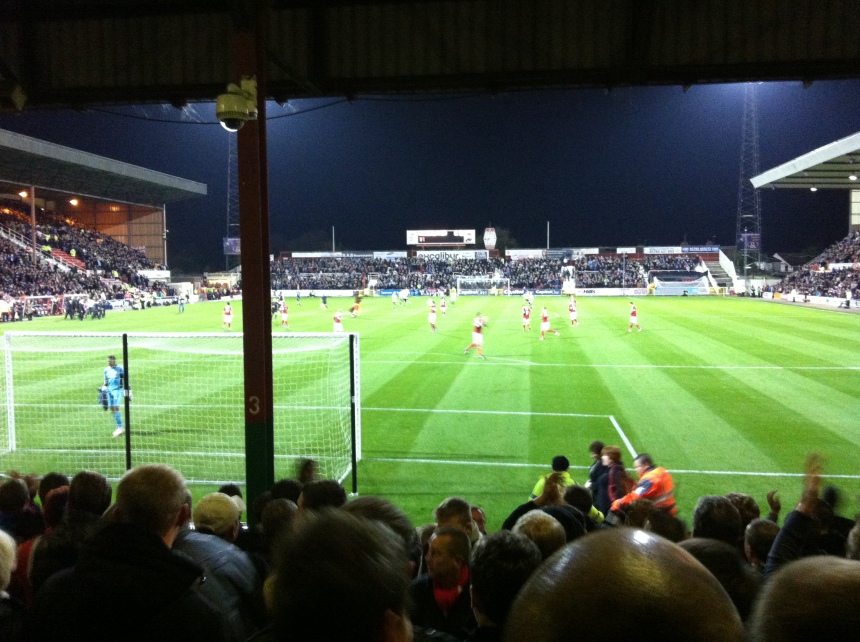 Swindon hadn’t been outclassed but individual moments had put them on the back foot going into the second half. The long ball tactic had its effective small bursts of usefulness but wasn’t of any major threat to the Villa backline.

A new tactic, a new game and a fresh feeling was brought on at half time as Town attacked the Town End with their trademark short quick passes, playing Villa at almost their own game. Town would pressure Lambert’s side to defend deep as cross after cross was put into the area without a Swindon head or foot on the end but the intent was there.

Andy Williams would be the first sub to enter the fray and his pace quickly changed the game. Town had a new outlet to play balls to chase along the floor, this opened up Villa as Town went in search of a goal.

Gary Roberts would have a good chance from a low header but his effort was wide and James Collin’s shot was blocked. Town were on the attack but were unable to carve that final ball. That is until the ‘goal of substitutes’.

Raffaele De Vita played a neat ball through Villa’s defence for Williams to run onto and his low front post cross found the poacher foot of Storey to chip over Given and into the net. 2-1. 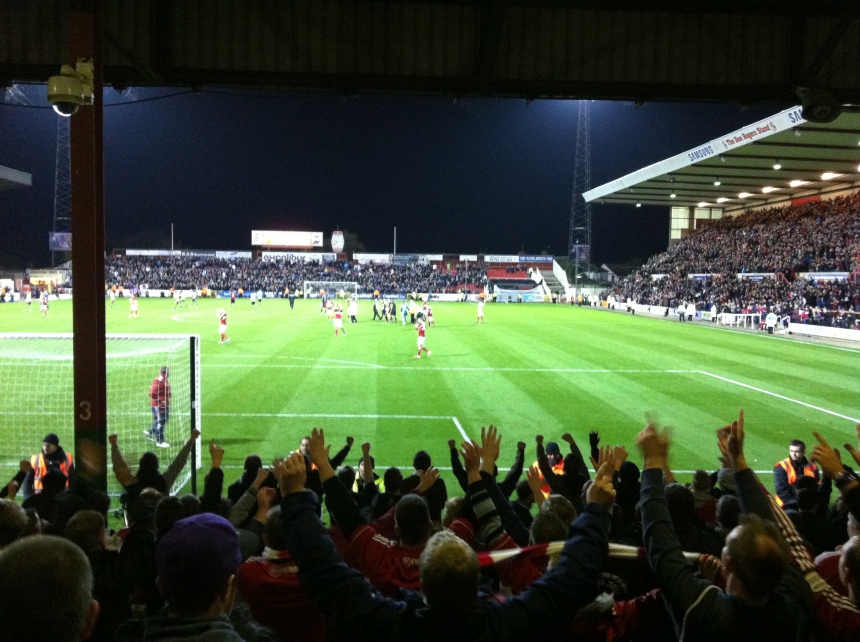 Then, Town on the attack, County Ground rocking, me slowly getting a headache as Ritchie crosses for Storey who, with a very cool touch, back heels it past Given, who needed the help of a ‘it’s behind you’ to know what had just happened. 2-2. Have I ever celebrated harder? Probably not as afterwards I needed a rest, no joke, it’s the most cardio vascular work I’ve done in weeks.

Two goals in three minutes had Town on the hunt for a winner, the high tempo was working, and the pressure was on Villa as Darren Bent and co now needed another.

It was Roy of The Rovers brought to life as Andy Williams wins the ball near the halfway line, he beats a Villa defender, runs at the defence, has the chance to shoot but takes the extra touch which lets the ball reach the hands of Given. It wasn’t to be the fairy tale ending Swindon hoped for as it was soon to be proven mythical.

Town, running out of energy, let Eric Lichaj cross for Benteke to control, pick his spot and sidefoot past Foderingham. The reactions of the Villa fans and Paul Lambert showed how much a win, any win, meant to them. If you could draw cup games, then that would have been the fair result but the win was in the palm of each teams hands and the individual quality of Villa was enough to grab it with thankfulness.

Every Swindon player fought hard on the night but it will be a game that Joe Devera will want to forget, purely down to the class and pace of Agbonlahor who had Swindon tripping over their own feet. Okay, it only happened once, but it’s a good metaphor.

However, for Swindon, Simon Ferry continued to cement his reasoning for a regular starting spot with a performance where every blade was met by his studs. Matt Ritchie was a constant threat down the right but it was Andy Williams and Miles Storey who would get Town back in the game.

Williams with his added pace and ability helped to create space that enabled Town to attack. His constant running at the defence without fear had Villa second guessing and helped change the atmosphere in the game.

Miles Storey though will get the plaudits on this night as his sensitive smell of goals was clearly evident. He was in the right place at the right time with a sense of calm surrounding him. It’s tough to not be excited by this man and not expect too much of him but over the course of the season, he could prove to have the predator instinct we lack at times. Trying to not build him up too much at this early point but that’s three goals in two games…

Swindon have every reason to be proud after that defeat as it shows that this team definitely has it in them to challenge for League One success. The performance at Stevenage, plus the Villa game, has got to give the players major boosts towards the Paolo Di Canio goal of promotion.

Firstly, we have an FA Cup first round game to deal with v Macclesfield to start the fairy tales and dreams all over again.