Why Swindon struggle against teams who force Town to hit and hope, by Alex Cooke.

The way to beat Paolo Di Canio’s Swindon is simple: pressure them. Preston did it, Leyton Orient did it, and last Tuesday night Colchester did it. The problem is that now every scout in League One will have seen it too: once Swindon are put under pressure at the back it seems that there isn’t the talent, the thought or the tactical flexibility to break out without hoofing it.

For that is what all these sides reportedly did, albeit in slightly different ways. They pushed up, they closed down, they defended from the front. Call it what you will but they denied Swindon time on the ball, time to look for short passes, and they did so in such as way as to target the weakest passers in the Town team – the defence.

The match against Leyton Orient provides a graphic example. Swindon didn’t lose against the Os because long balls were hit, the hoofs were a symptom, not the cause. Russell Slade’s organised and energetic side simply forced Town to play that way, and had the talent on both flanks to exploit it.

The flaw is clearly visible in the below sequence. The opposition’s attackers are making sure that Town’s centre backs don’t have easy passes into midfield or out to the full-backs. Instead they have to look beyond a static midfield and hit hopeful, and usually inaccurate, balls straight towards the front line.

Below – Orient upped their pressing after scoring. With wingers Cox and Cook forcing Town’s full-backs to play the ball inside, Flint is isolated and his long clearance cut out. 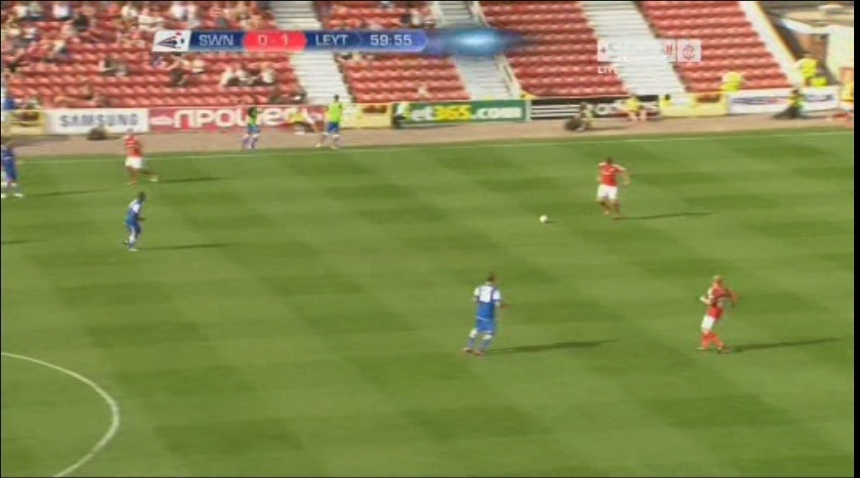 But also notice what isn’t happening – Orient aren’t initially attempting to challenge either Aden Flint or Alan McCormack. They are marking the central midfielders Alan Navarro and Tommy Miller and getting tight to the full-backs Joe Devera and Federico Bessone.

Instead the two centre-backs are left to pass between them, or back to Wes Foderingham to hoof forward. They did this as Orient’s scouting reports must have rightly told them that neither defender had the ability, or the movement in midfield, to escape a tight pressing game.

So after just 11 seconds McCormack tried the first long pass of 52 long passes Swindon played in that game. Now contrast that with the Brighton tie when Swindon took 13 minutes before they had to resort to hoofing the ball downfield.

In that match Troy Archibald-Henville and McCormack were also free to tap the ball between them, but when they wanted to move forward Devera and Jay McEverley were always available, and often in the Brighton half. For the Seagulls, secure in their superiority, sat deeper, falling back into their own half when they didn’t have the ball. Instead of pushing and compressing the game, their 433 was for the most part deep and compact. So Swindon were able to move the ball from defence into midfield and beyond on the floor. And Troy Archibald-Henville did so, often very effectively.

The same goes for Milton Keynes Dons. The stolen club similarly couldn’t hunt down Town at the back as they were instead being pressed heavily themselves in central midfield.

While the Orient and Brighton games were polar opposites, the truth remains that Swindon don’t respond well to being rushed in defence. One problem is in the limited amount of technique in central defence: Aden Flint, despite his qualities as a blocker, is below average on the ball. On first impressions Darren Ward isn’t truly comfortable either while Alan McCormack is a better dribbler than he is a long-range passer. Hence he needs space to move into, something that Orient’s pressure also denied him.

The final option is always a pass back to Wes Foderingham to play up-field. However, when last season Town found some success with the long goal kick to Matt Ritchie to head in-field from the flank or back to his full-back. This season the long pass has been to Andy Williams and so far, while Williams is a superb player, it had been relatively easy for teams to defend against.

Last season the problem was also less pronounced because so few teams tried to press. Any sides which did try often did so with their centre forwards in isolation, and a poorly disciplined partial pressing game is an invitation to be picked off. Which is why most managers in the lowest league don’t dare. However, in League One it is common place and will become more so especially if Swindon can keep moving up the table.

Of course, none of this is a problem if long balls work, but for Swindon they often don’t. Against the Orient defence just 19 of the defence’s 52 long passes were completed, let alone being accurate enough to be turned into a chance or possession.

The simplest way to defeat a pressing game is by having a back line who are mobile and comfortable on the ball. At its simplest if a defender can beat a man with the ball, he probably can’t be pressed very effectively. However, pressing can change even good passers. Against Brighton, Archibald-Henville completed 75% of the attacking passes he made during the first half. He also hit nine longer passes in that 45 minutes of football, seven of which were into feet and all were on target. However against Colchester it seems he was anything but a model of accuracy.

The same could be said of Flint. Against Orient the former Alfreton man was clearly aware enough of his limitations, passing the ball to McCormack or back to Foderingham at every opportunity. Of the ten forward passes he hit in 90 minutes 80% of his passes were long and just 60% were accurate. A total which isn’t impressive although Joe Devera actually played a higher percentage (86.6%) of longer passes, although five of his 13 long passes were actually into feet, not aimed roughly at someone’s head as nine of Flint’s ten were. Unsurprisingly Alan McCormack played the lowest percentage of long passes (73.5%) but although his figures suffered during the last few minutes when he was forced to hoof four balls hopefully forward when Flint became a makeshift striker. Feda Bessone proved the most wasteful in playing the long game, managing the lowest amount of completed passes at just 50% and 75% of his 12 forward passes were long.

Where Devera obviously falls down when it comes to mobility, something that Nathan Thompson certainly offers, although his lack of appearances precludes hard data. Thompson has both quick feet and a desire to move forward, and in that he is starting to emulate Paul Caddis in pushing back his winger. The now-departed Scotsman provided the attacking template in this regard, undertaking three dribbles and playing in seven crosses during the Leicester FA cup-tie and receiving the ball nine times in his own half but eight times in the opposition’s in the first 45 minutes. Contrast this with Devera who despite not being pressed made no notable dribbles and who received the ball almost exclusively in his own half in the entire JPT final. Now, who sounds easier to press?

While movement is key to break the pressing game, so is bravery. The midfield, instead of dropping closer to the defence to take the ball, needs to push further upfield. Coordinated runs will drag their markers away, giving space for the defenders to move into and the forwards to drop deeper. A neat summary of the basics of how to play against pressing can be found on drillsandtactics.com.

As you can see it is vital to move the opposition out of their positions, to make their markers question who and where they should be following. Should their centre back go with Williams if he goes deeper than Simon Ferry? Should their full-back chase Matt Ritchie if he pushes right up against the defensive line with Paul Benson moving into the gap?

The upside for a defenders is that the opposition’s pressing creates additional space because such close marking removes the protection of covering defenders. That is when those with high levels of technical skill, close control and awareness come into play. Quick interpassing open gaps and for Swindon that means playing Gary Roberts, Simon Ferry, Miller, Matt Ritchie and, yes, John Bostock.

Here formation matters less than imagination. There is no simple solution for while Bostock could offer an option moving deeper into midfield, William’s pace over the top is needed to stretch teams. And if none of that works, Benson’s guile can turn hoofed balls into flick ons and free kicks.

There are problems however when Swindon face a three-man midfield as Di Canio favours Alan Navarro for the inevitable battle, and he seems to struggle more than most to play proactively and vertically.

A 433 pressing a 442 also creates another problem. No longer are the defence’s full-backs left with space to move into – they are instead pinned back by the wide forwards – so one of the centre-backs becomes the ‘spare man’ with no direct opponent. Which, if McCormack is injured means that Ward and Flint could find themselves having to play a lot more passes.

There is no panacea for dealing with pressure but with drilling, practice, movement and the familiarity of playing a settled side once in a while Town should be able to finally break out of this depressing pressing game.

Above – With Brighton falling back into their own half, Swindon’s defenders were able to pass easily and freely from back to front.