For our 14th entry into the Swindon Town Hall of Shame, Dan Johnson looks back at when former manager and disgraced pundit Ron Atkinson turned up at the County Ground as a ‘football troubleshooter’ with Sky TV cameras for a short period in the 2005/06 season.

As all Town fans know this season was a disaster, fellow Washbag contributor Tom Otrebski has already mentioned this particular season in the Hall of Shame, that shows you how much of a mess it turned out to be.

Just in case you’ve managed to wipe this season from your memory let me quickly remind you.

After a terrible start that sees Town slump the to the bottom of the league, manager Andy King is sacked and due to the clubs financial problems they promote Iffy Onuora up from the youth set-up to take charge of the first team. 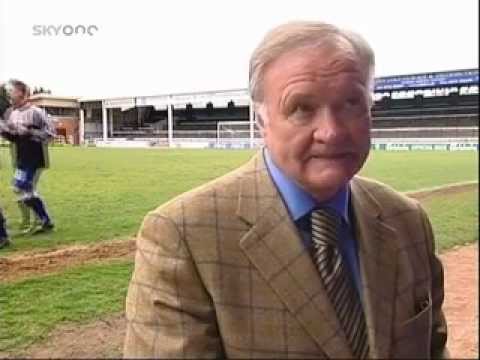 Results do start to improve, but again due to the clubs financial problems they are forced to sell top goalscorer Rory Fallon in January, and apart from a slight return to form in February it never looked likely the team would survive after the sale of Fallon and Town returned back to League Two twenty years after leaving.

But I’m not here to focus on the whole season; I’m just interested in what happened between December 2005 and January 2006, when Sky came knocking on Swindon’s door with an idea of a TV show.

Ron Atkinson is a well-known name across the world of football, in his playing days he was a one clubman with O****d Utd. In his managerial career, he won two FA Cups with Manchester Utd, two League Cup with Sheffield Weds and Aston Villa, and several league titles at lower league level. When retiring from management in 1999 he went into media work and eventually became a co-commentator for ITV.

But this came to an end in April 2004 when thinking his microphone had been turned off, Atkinson made racist remarks about former Chelsea player Marcel Desailly that were still heard by some viewers in the Middle East.

Following this incident big Ron was desperate to re-build his reputation in the game, and was given that opportunity by Sky One in a show called ‘Big Ron Manager’. The show involved Atkinson going into a club and is the ‘troubleshooter’ and uses his 40 years of experience in the game, and of course we all know where Ron turned up first.

As I’ve already stated Town were in serious financial trouble at the time, and were in a situation where it was very hard to say no to any potential money coming into the club. With Sky reportedly offering Swindon £100,000 for access in and around the club and to film Ron – a self styled ‘Football Consultant’ – helping rookie boss Iffy Onuora in his job, it seemed like an amount the club simply couldn’t refuse.

“We’ve got a staff of people here who I’m very happy with. Results are showing we aren’t doing too badly. Any other help we get will be great, but Ron is here to front a TV show.” Iffy Onoura in December 2005

And the setting was perfect for Atkinson himself with Swindon having one of the few black managers in the Football League, so it gave him a chance to defend himself over the racism issue and even discuss the matter with boss Iffy Onuora.

Filming for the show began in late December 2005 with Town sitting bottom of League One and in desperate need of some new faces in a squad lacking any real quality. With filming underway problems between the manager and Atkinson were very obvious early on with Iffy not happy at how much influence big Ron was going to have at the club.

“It will be great to be back around a football club again. It has been a long time. I am not going there to do a Clive Woodward. Iffy is the manager and I am there when he needs me. I will start tomorrow and see where we go.” – Ron Atkinson speaking to the Daily Mail 29th December 2005

Also with the title of the show being called ‘Big Ron Manager’, implying Atkinson was involved in the club far more than he actually was, Iffy Onoura soon had the cameras thrown out of the County Ground and the executives met to persuade Iffy his position wasn’t under threat.

At one point in the program Atkinson was repeatedly shown on holiday in much sunnier climes than Swindon, trying to help the club out by ringing up old mates in the world of football and trying to persuade them to send any reserve team players Swindon Town’s way, reportedly without the knowledge of the manager.

But after only getting an offer of a couple of youth team players from old Manchester United buddy Bobby Robson who was in charge of West Brom at the time, nothing came from his “scouting of new players”. 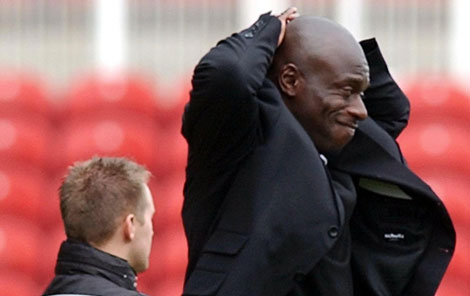 The only player recommendation that was follow up on was the loan signing of Trevor Benjamin from Peterborough to try and replace Rory Fallon, but unfortunately Benjamin never showed any real quality and could only manage two goals in his time at Town.

With the production team and the man himself wanting more access around the club including the dressing room, the whole project was swiftly cancelled by Mark Devlin; but the damage had been done and the manager undermined.

In the end it was the best decision for everyone involved, If Ron was allowed to go and have a lot more say in how Swindon operated day-to-day, that would of caused problems with a lot of fans with Atkinson being an heroic figure down the road in O****d.

It’s hard to imagine now Town being relegated with an O****d legend sitting next to the manager in the dugout, it would have been a PR disaster for the club.

After that Sky and big Ron decided to move onto Peterborough United, which also ended on a sour note with the manager walking out on the club just 70 minutes before a huge game for the club due to outside interference from Ron and then owner Barry Fry.

Atkinson’s short time at Swindon was only featured on Sky at the end of the first series, in a one-off special titled ‘When Big Ron Went Iffy’. If anyone can find a video then we’d be grateful…

Overall do I think Big Ron Manager was the reason we got relegated in 2006? While there were many other reasons behind our decline, the whole idea of the programme was to help the manager, however it failed miserably and damaged the reputation of the club.

It turned out to be a major distraction for everyone involved in trying to save Town from the drop. Indeed, Iffy later said “With disaffected players, a budget hemorrhaging money and a fly-on-the-wall reality show featuring the recently disgraced Ron Atkinson, my spell there had it all as a cut-out-and-keep guide to crisis management.”

That’s why Ron Atkinson and his TV show are going into the Swindon Town Hall of Shame.

Read More Tales from the STFC Hall of Shame