With Town set to travel to Wembley tomorrow for our fifth visit to the national stadium, our second Video of the Week – courtesy of swindon-town-fc.co.uk – is extended highlights of the 1990 Division Two Play-Off Final versus Sunderland on the 28th May 1990.

As the match was just before my 9th birthday, my memories of the day are a bit sketchy so it’s great to watch the match action in detail for the first time in nearly 22 years. 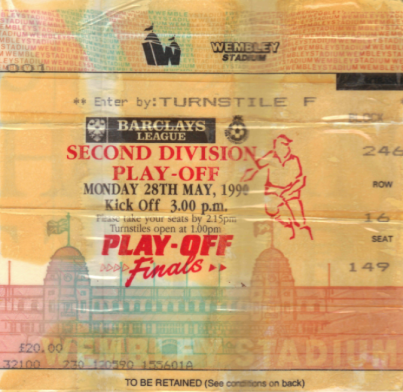 My lasting memories from that warm afternoon was the sea of red and white travelling down to Wembley, walking up to the concourse in the North Stand up the stairs in one of the twin towers, being overwhelmed by the sheer number of Swindon supporters and being held aloft on the shoulders of a steward as the Town paraded the trophy at the end of the match.

Though the Town completely control the Play-Off Final against Sunderland, a single deflected goal by Alan McLoughlin is enough to win the game, and promotion to the First Division – ten days later though, the football authorities would snatch the prize away.

Read more about the 1990 Play-Off Final and get the Match lineups at swindon-town-fc.co.uk