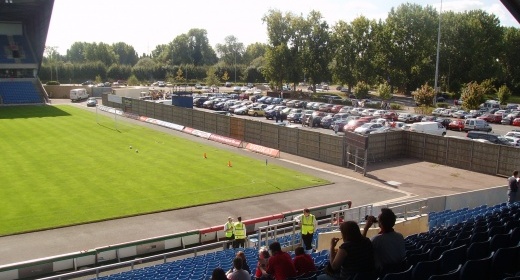 Swindon travel up the A420 to the Kassam Stadium for the 12.00 kick-off against Oxford United; and will attempt to avenge our 1-2 defeat back in August

First placed Swindon are currently on a run of one defeat – at Torquay on Boxing Day – in twenty-one League Two matches. Town’s current form guide reads a club record TEN League wins in a row.

Away from the County Ground, Town are unbeaten since that defeat at Torquay, making it four wins in a row, one draw and that defeat, scoring 11 and conceding 6. Swindon have conceded at least one goal in our previous seven away outings in the League. The last clean sheet was at Port Vale back in November.

7th placed Oxford United drew their last game 1-1 with Macclesfield, making it two victories and four draws in their past six outings.

At the Kassam, Oxford are unbeaten in four games, since a 0-1 defeat by Crewe, making it two wins, three draws and one defeat in six games. Oxford haven’t had a clean sheet at home in six games.

You've only got three stands...

At the Manor Ground and the Kassam, Swindon have 7 victories, 12 draws, 9 defeats from 28 matches; scoring 31 and conceding 36.

In the Town’s only previous trip to the Kassam, we were defeated 0-1 in an FA Cup 2nd Round tie in December 2002.

Swindon have won two and lost four of our previous six trips to Oxford in the League.

Though the two clubs now enjoy an intense local rivalry, competitive clashes between Swindon and Oxford only started in 1965, three years after the U’s were elected to the Football League to replace the bankrupt Accrington Stanley.

Many of the opening encounters between the sides were cagey affairs, with just nine goals being scored in the first ten matches, six of which being scored by the Town in two 3-0 victories. Of those ten games, six ended as goalless draws, and Oxford failed to score in all but two of the games – their first goal against the Town coming in the sixth match between the sides.

When Oxford finally registered a victory against Swindon at the eighth time of asking, it was an ignominious exit from the League Cup for the Town – the 1-0 defeat at the Manor Ground ending their defence of the trophy, having won it the previous season. Since then, Swindon have maintained an impressive record over their local rivals.

Few players have been transferred between the two clubs over the years – though one of the most controversial happened in 1995, when Joey Beauchamp returned to the Manor Ground from Swindon for £75,000 – a loss of more than £700,000 on the price they paid just fourteen months previously.

In June 1993, Beauchamp joined West Ham from Oxford for £1m, but after just 58 days at Upton Park, he decided that the commute to East London from his Oxford home was untenable, and Swindon boss John Gorman took his chance to bring him to the County Ground after being thwarted by the Hammers in his previous attempt to sign him. Beauchamp eventually joined for a deal worth £800,000, with Town defender Adrian Whitbread included in the deal – but he failed to impress at Swindon, and made just sixty appearances before being sold back to Oxford in a cut-price deal by Steve McMahon, who very obviously didn’t appreciate his style of play.

Beauchamp was to score past the Town in the next meeting between the sides – a 3-0 win for Oxford over the Town – and the season ended with Swindon champions of the Second Division and the U’s in second place.

What The Stats Say…

Here are how the teams perform in each of the five attacking and defensive measures, when assessed against the rest of the division…

Both sides are very evenly matched judging by comparing Oxford’s performances at home with our away statistics.

Swindon have allowed more shots, and more of those on target, than Oxford, but this is marginal, and its typical that an away side will have fewer chances at goal.

Oxford have had greater success in front of goal as hosts and are clearly more accurate than Swindon have been in our away games this season. Fortunately, with the Town’s save rate standing nearly 9% above Oxford, Super Wes Foderingham will be well up to the task of defending our goal.

Turning to goals scored, as hosts, Oxford United have scored 28 times, with 17 of those coming in the second half. Oxford have been most lethal immediately after half time and in the final 15 minutes, when 7 goals have been scored during each period.

In defence, Oxford have conceded 17 as hosts. Again, the second half has seen the majority of the action with 13 conceded, including 10 during the final 30 minutes.

As I keep saying…..Swindon Town have still yet to concede in time added on home or away this season…

I can’t see Swindon coming away from Oxford with a defeat, but whether we’ll make it eleven wins on the bounce…I’m not so certain.

We haven’t kept a clean sheet in seven away games and Oxford are strong at the Kassam. That being said, they’ve only kept three clean sheets as hosts this season, so the money is on a 1-1 draw, but the heart says a narrow 1-2 victory to Swindon.

COME ON YOU REDS!!

Swindon versus Oxford: The Birth of a rivalry

Swindon v Oxford: Rivalries, we’ve had a few. But then again, just one to mention