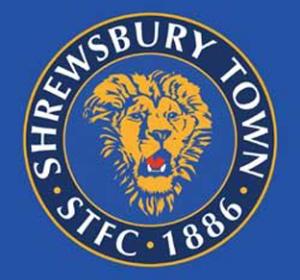 A series of postponed and re-arranged fixtures delayed the inevitable but Town have finally reached top place by beating promotion rivals Shrewsbury 2-1. As a spectacle, it was far from a classic but the gritty performance will prove to be as vital as our recent emphatic victories over Crawley and Southend writes Rosie MacGillivray.

Paolo Di Canio kept an unchanged team from our win at Hereford as he returned to the touch line. He was also able to call on Simon Ferry once more, following his recovery from a virus, which saw him substituted off  in our victory over Crawley a week previous.

Aware of Swindon’s fluid style of play, Shrewsbury came with a plan and – for the first-half at least – it worked as Town were left frustrated. Graham Turner’s side took advantage of their physical and height superiority as Town seem overwhelmed by an ‘up and at you’ Shrewsbury. Possession was difficult to grasp, leaving either Matt Ritchie or Luke Rooney able to be the vital creative spark.

Luke Rooney produced our best attacking play of the half; dribbling pass a stationary Shrewsbury defence before rolling the ball off for Bodin after being harshly tackled, although no foul was given.

The away side got their just rewards on 40 minutes. Midfielder Mark Richards was able to beat Ritchie to the ball to nod home from six yards. The goal ended hope of Wes Foderingham breaking Fraser Digby’s record as he conceded his first league goal at the County Ground since his move in October.

Players come and go but one thing will always remain at the County Ground – unreasonable fans. The team was booed off by a minority at the break and it’s never good to see, especially when a team have won their last seven.

Di Canio knowing a fresh impetus was required, brought off Billy Bodin in place of Alan Connell. Bodin was unable to emulate his recent performances since returning from his loan spell at Torquay. In truth, he appeared overpowered by an organised and solid Salop defence.

The opening ten minutes did little to suggest a comeback was on the cards as they remained devoid of ideas. A mis-placed pass from kick-off gifted Shrewsbury immediate possession before Jonathan Smith either a shot or pass, which went horribly wrong. Shrewsbury looked the more likely to score the game’s second goal as Swindon were forced to weather the storm.

There were a few hearts in mouths when Terry Gornell fell under pressure from Alan McCormack following Alessandro Cibocchi’s mis-timed header leaving the defence exposed. Although replays show the tumble began outside the area. Minutes later, McCormack made a vital goal line clearance from a James Collins shot.

It looked as if Swindon were to surrender their eight-match winning run; as they struggled to string two or three passes together, with head tennis becoming the main event. The game was crying out for Simon Ferry and his introduction was met with a warm applause.

With the minutes creeping away, a degree of urgency was finally found and the tempo went up a few notches. A tame long-distance shot from Ritchie looked to be heading into Chris Neal’s arms with ease but a fumble allowed the ball to fall to Connell, who converted the simplest of tap-ins.

Momentum had fully swung in favour of the home side and from here on in and Swindon sensed victory. Paolo Di Canio used his final substitution with 20 minutes remaining, bringing Oliver Risser on for Arsenal loanee Daniel Boateng. The change allowed Town to play a higher line.

With 15 minutes remaining on the clock, Connell was in the right place at the right time to grab his and Town’s second to complete the turnaround. A short corner between Cibocchi and Rooney allowed the latter to find space on the edge of the box, whose delightful shot hit the bar before a scramble in the box. It would have been a sure-fire goal of the season had Rooney’s shot gone in.

Shrewsbury fought for an equaliser but never really looked like grabbing a equaliser. Paul Benson received a yellow card in the dying moments for time-wasting was the only worthy event.

Much like Saturday at Hereford, the strength of character within to grind out results is likely to be the difference between success and failure. Town have two home games within the next week to really cement their place as League Two’s elite side before a trip to the wrong end of the A420.