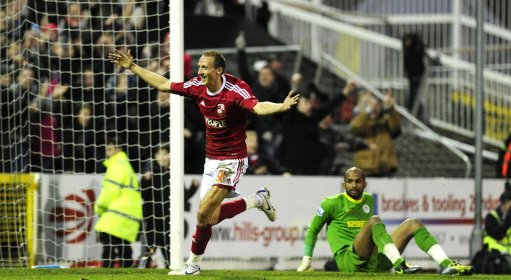 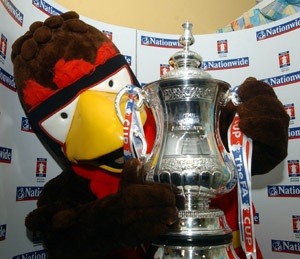 Swindon Town are into the FA Cup fourth round thanks to a magnificent 2-1 victory over Wigan Athletic….we’ve not had the opportunity to celebrate that achievement in a while writes Ron Smith.

It’s been fifteen long years since our previous run beyond round three. Town are rewarded with a trip the East Midlands; thanks to goals from Alan Connell and Paul Benson, this after Callum McManaman pounced to shoot following a wayward Wigan penalty.

The result reverberated around with commentators defining this as the shock and upset of the round. It was a shock that Wigan who are some 53 positions above their Wiltshire opponents couldn’t progress. The thousands inside the County Ground witnessed a truly deserved Town victory, which translated the professionalism and desire of their manager into the performance on the pitch.

Unlike Wigan who made nine changes from a midweek defeat by Sunderland, Paolo Di Canio kept faith with an unchanged XI. The familiarity between players was always going to work in Town’s favour, yet the strength in depth and nous of a top flight team should normally be enough to dispatch their League Two hosts.

It all started off well enough for Wigan. Swindon went into the match knowing they’ll be up against a side who have a habit for retaining the ball well, so sat back too much and too easily surrendered possession. Wigan were more than happy be patient, playing it around short at the back before launching balls over the midfield to Di Santo and into the channels, however they didn’t seize the early advantage as they failed to create any notable chances with Hendry Thomas contributing an ineffective long range effort over the bar. Paolo got what he wanted pre-match, as Town held out for the opening 20 minutes.

Without much of the ball, Town had to rely on a wayward ball forward by Adrian Lopez to snatch an opening shot on goal, but Ronan Murray’s aim was off as his shot went straight to Al-Habsi’s chest. Then with nearly half of the opening period gone Paul Caddis’ cross receives a fortunate deflection but agonisingly flies inches wide of the post.

It would take Swindon time to get wise to the source of Wigan’s control, soon starting to press and hassle the Wigan ‘keeper and backline even harder, but before Town could think about grabbing the lead they needed to pick themselves up after falling behind.

Wigan’s goal was handed to them on a plate. With the game settling down for both sides, Callum McManaman was evading the challenge of Aden Flint, only to turn inside and for the Town defender to mis-time his challenge and send the youngster tumbling. Ben Watson took the resulting penalty kick, slipping, which sent his strike to hit the bottom of the upright, McManaman was quickest to react – seemingly because he had encroached inside the penalty area – to fight off Ritchie and pounce to fire past Wes Foderingham with 33 mins on the clock.

Despite being a goal behind, Town were unmoved as they persisted to assert themselves in the lead up to the equaliser. With a great spell of attacking pressure Matt Ritchie’s shot from outside the area expertly tipped past the post by Al-Habsi. Then, with five minutes to go before the break, Town secured the leveler at the perfect time.

With Swindon’s late half dominance continuing Ritchie was again involved as he sends over a wonderful floated cross, that was met by the rising and poorly marked Alan Connell. The former Grimsby man glanced his backward header past a hapless Al-Habsi to make it 1-1. As Connell reeled off in celebration towards the DRS his three goals in as many games perhaps may ensure Town have found the consistent striker we’ve been lacking all campaign.

Unlike their early advantage, Wigan were not allowed to control the game again. Just before half time Ritchie, Ferry, Connell and Murray combined with some neat one touch football to surge through the centre and send the on loan Ipswich striker through, but strike narrowly over Al-Habsi’s head. 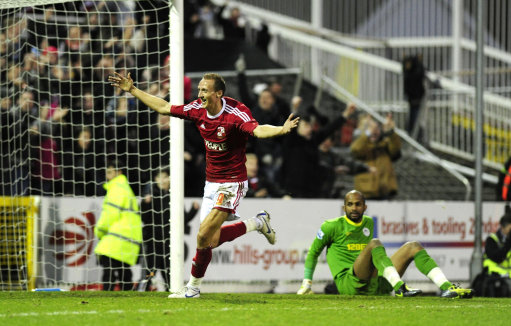 Town cemented their dominance at the break with the introduction of Paul Benson for Murray. The former Charlton striker again made the difference and showed tantalising glimpses of what is install when back up to full match fitness.  The change helped to restrict Wigan as they looked more at the emerging Swindon attacking threat which sought to sit deep, but press forward and counter in numbers.

The pace of the second half came at a price, with Connell lagging, Di Canio played a masterstroke in bringing on Lukas Magera and giving him the role which would eventually ensure Town would finish the game the winning side. The Czech striker, was allowed to drop deep, support the midfield and provide the link up play with half time substitute Paul Benson.

The pressure paid off with fourteen minutes remaining when Matt Ritchie unleashed a drive from range only for his strike to be caught by Paul Benson. The deflection understandably caught out the Wigan ‘keeper who was already diving to his left. Post match Wigan boss Roberto Martinez complained Benson was offside when he deflected the ball past Al-Habsi and that his side missed out to a ‘lucky’ Swindon side. You can’t argue with the former, yes Benson was offside, but if this would’ve been disallowed we were in the ascendency and the winner was always heading in our direction. In terms of the ‘lucky’ comment, Wigan were fortunate their opener wasn’t disallowed for encroachment…

With time running out Wigan continued their patient approach continued, which doesn’t fit trying to find the equaliser in the final moments of a cup tie. When they pressed forward their chances were cut out down a resolute Swindon who remained professional and disciplined right up to the final whistle.

As Swindon celebrated a fantastic and deserved 2-1 victory the result was a shock to those not in attendance, but for the 13,238 supporters inside the County Ground it wasn’t a shock as Town fully deserved to progress to the fourth round.

The Lactics arrived and masqueraded as a top flight side. In the end the only element of the Premier League about Wigan was the badge on their shirt sleeves – a probable hastily applied addition bought from their owner’s shop before the match. While there were many changes in Martinez’ side, who later admitted he’d wished eleven were made – wouldn’t you if you knew you were to get beaten anyway – this 2011/12 campaign may finally be the one where they fail to avoid the drop. If there was one thing everyone learned from this result, Swindon are masquerading as a Championship side in League Two.

Looking ahead, while Paolo Di Canio didn’t get his wish of a trip to Old Trafford in the fourth round,  his Swindon side are certainly capable of another ‘upset’ against Forest or Leicester. Some of the post draw reaction uttered groans of disappointment that we hadn’t been drawn a ‘big’ team, supposedly to allow the Town fan the chance to watch the side they really support… Why complain? Any draw is a fantastic draw for Swindon…the reason why…because we’re in it and there’s a chance to progress to the next round!

Your Man of the Match: Matt Ritchie with 29% of your vote